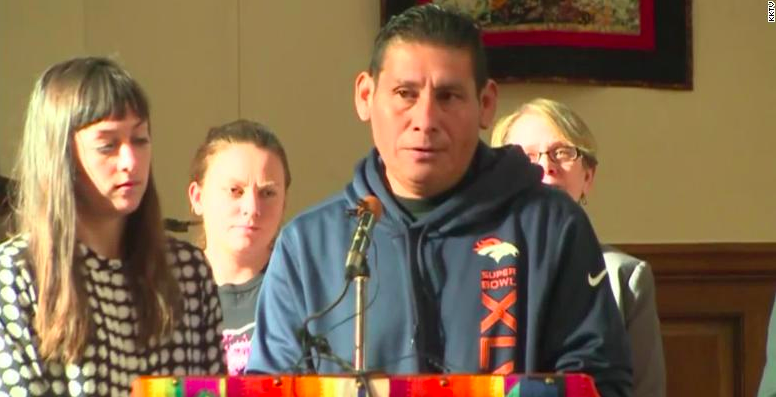 Earlier this year, CNN irresponsibly gave positive coverage to an illegal immigrant hiding from ICE in a liberal sanctuary church in Colorado. One week ago, that same immigrant killed a father of five in a car accident, while driving recklessly without a license. As usual when these things happen, the only thing you hear from the media is crickets.

According to Denver’s local ABC station, on August 2, Miguel Ramirez Valiente, from El Salvador “went off the side of the road on Hwy 83, over-corrected into the opposite lane and hit Sean Buchanan,” killing the father of five, who was meeting his wife that morning at their new house they had just bought.

This wasn’t Ramirez Valiente’s first crime (other than coming to the country illegally). The ABC affiliate confirmed that he had a criminal history, charged with reckless endangerment in 2011, domestic violence in 2016 and a DUI in 2017, when his license was revoked. For taking Buchanan’s life, he was charged with careless driving with a revoked license but was not held by police. To make matters worse, his probation for that DUI had been extended the day before he struck Buchanan in the car crash.

According to a woman who spoke on camera to the ABC affiliate but didn’t want to be identified for her own safety, claimed the suspect was an alcoholic abuser, and shouldn’t have been driving to begin with. You can see the local news report, above.

Valiente’s rap sheet was conveniently ignored by CNN when they wrote a puff piece about him evading deportation, back in January.

“He says the shutdown forced him to seek sanctuary,” Catherine Schoichet’s headline from January 9 CNN.com article read (yes, CNN managed to combine a sob story about the government shutdown and deportation, all in one.)

Most immigration courts are shuttered because of the shutdown….So Ramirez Valiente stood at the pulpit at All Souls Unitarian Universalist Church in Colorado Springs, Colorado, on Wednesday and told reporters he was seeking sanctuary to fight for the chance to remain with his wife and three children.

Even worse, Schoichet obfuscated his criminal past, writing, "Ramirez Valiente, a stonemason, said gang violence forced him to flee El Salvador 14 years ago. He's been fighting his immigration case since 2011, after a traffic stop by a local sheriff landed him in ICE custody." Why no mention of his reckless driving, DUI or domestic violence charges?

The rest of the report was peppered with sympathetic language about ICE “terrifying” Ramirez Valiente’s family and how the church was a safe haven for immigrants like himself who were “fleeing violence.” How ironic.