Soboroff Scoffs: ‘Obvious’ Trump Is Responsible for Violence, ‘Should Make All of Us Sick' 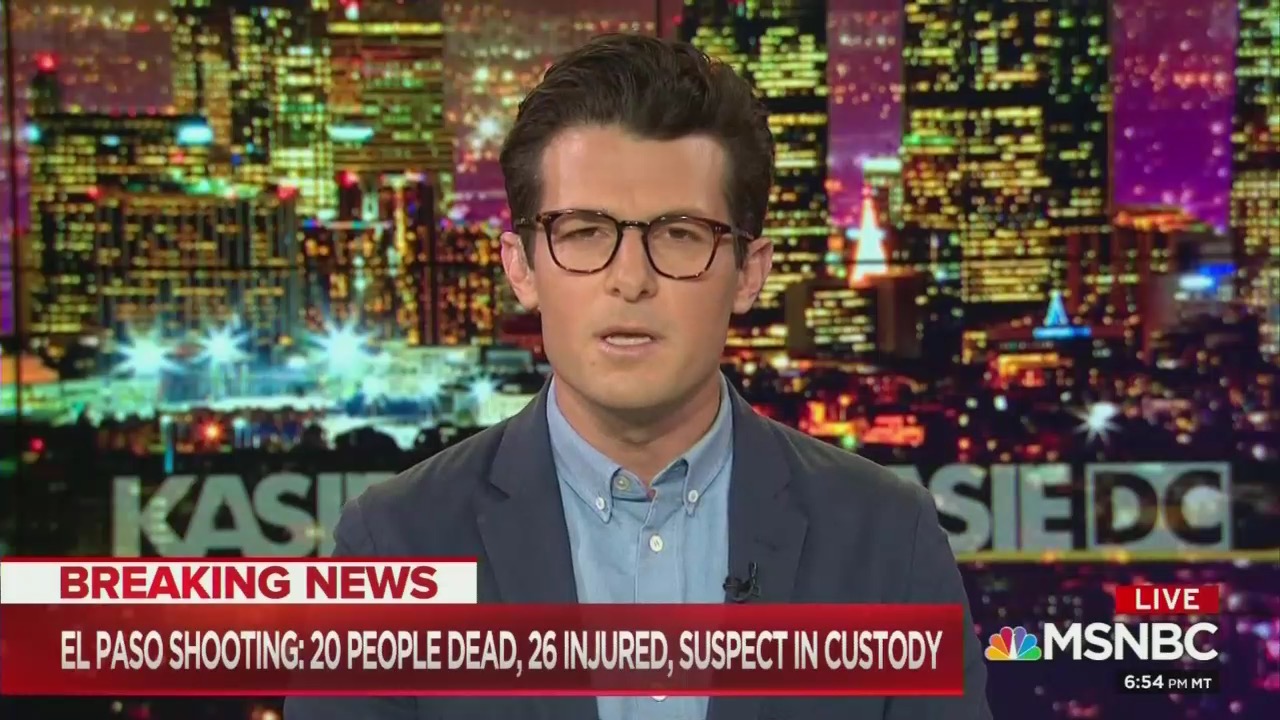 Sunday on MSNBC’s Kasie DC show, host Kasie Hunt and her liberal guests took turns blaming President Trump’s “racism” and America’s “gun culture” for the previous day’s massacres. Sounding more like a Democrat politician, correspondent Jacob Soboroff ranted that it was “obvious” Trump was to blame and should “make us all sick.”

Before this, host Kasie Hunt complained to MSNBC contributor, the BBC’s Katty Kay, that gun violence was a unique American problem. Kay lectured that gun control was the answer: “In Australia and New Zealand where they’ve had mass shootings, they have taken action to restrict access to guns. It's simply about guns and access to guns, and gun control,” she declared. Kay blamed Republicans for not wanting to "fix" gun violence:

I can't think of another area of public policy in the United States, whether it is health care or terrorism, whether legislators would be this fatalistic and say, well, we can't do anything, we can't fix it….And it is astonishing in a sense that on this one issue legislators will say on the Republican side it's not our job actually we can’t, it’s not our job to be involved in gun control.

Correspondent Jacob Soboroff however, was aghast at the idea that anyone wouldn’t blame Trump. In a fallacy-filled rant, Soboroff claimed Trump was a racist and it was “clear as day” he was to blame for this weekend’s shootings. He even tied law-abiding gun owners to the shooters:

The thing that I just don't understand is why we continue to have people today ask why or how did this happen. The President of the United States has never hid his racism. He's never hid his naked self-interests. He is the one that put the children into the cages down on the border and separated it. I saw with my own eyes. Despite the fact the vast majority of immigrants that come to this country don't come to the southern border. They come through airplanes and they land here and overstay their visas. This is the president that called immigrants rapists and criminals. Told people of color to go back to their home countries. Talked about infestations and invasions.

When the NRA donates $30 million to the President’s campaign in 2016 he call the National Rifle Association, ‘good American patriots.’ It is clear as day to me why this is happening and it should make all of us sick. It is obvious. It is right in front of our faces.

Hunt also badgered her Republican guest, Antonia Ferrier, former press secretary to Sen. Mitch McConnell, to blame Trump, asking if President Trump’s rhetoric around race “contribute to events like the one we saw in El Paso.” Because there was only one answer she was looking for, Hunt added, the shooter “gave us a window into his mind that uses a lot of the language this president uses.”