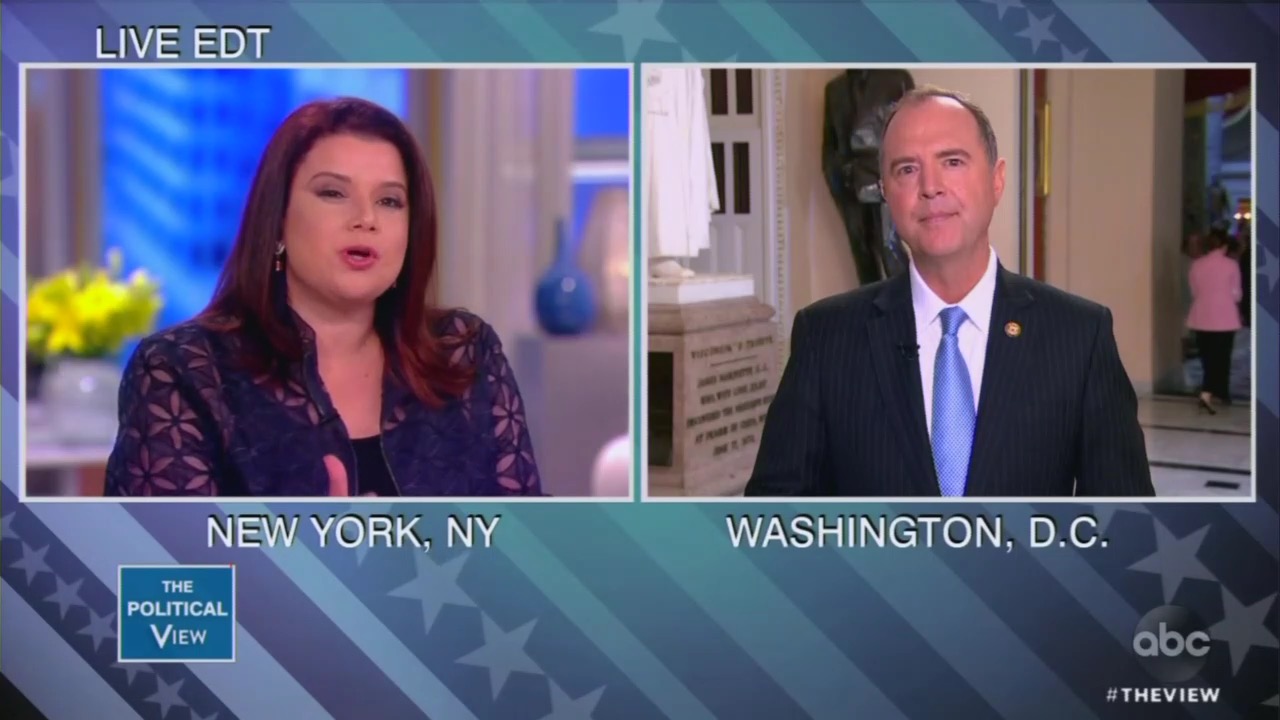 Later on Thursday’s The View, the co-hosts held a Skype interview with Democrat Adam Schiff about the Mueller hearing and what Democrats would do going forward. Co-hosts Ana Navarro and Whoopi Goldberg badgered Schiff that his party needed to impeach Trump now, while Joy Behar ranted Republicans were treasonous and being “helped” by Russia.

Co-host Meghan McCain did get to confront the Democrat early on, demanding he produce the “smoking gun” evidence he’s been touting for the past two years that there was collusion with the Trump campaign and Russia. Schiff said the “evidence was in plain sight” but the only example he gave was the Trump Tower meeting. The other co-hosts pressed him from the left. Ana Navarro wondered if yesterday’s hearing “brought him closer to an impeachment inquiry.”

After glumly admitting that no new facts were brought forth yesterday so he “didn’t know,” Navarro, who calls herself a Republican, urged the Democrat to go forward with impeachment proceedings “for the American people:”

Is that the right question to ask? You just went through the elements and the facts that we know that prove what you said was, you know, the perfect case for collusion. So if we have got those facts and we have got that information, how do you justify to the American people not following up with an impeachment inquiry?

Whoopi Goldberg also pressed the House Intelligence Committee Chairman that it was his job to “do something” about Trump, after he suggested Americans vote Trump out in 2020.

“This is up to you all. This is in your hands,” she ranted, demanding Congress “do something:” “Y’all need to do something!” she pleaded.

Joy Behar took to attacking Republicans instead. After calling them disrespectful and unpatriotic earlier in the show, she claimed they were treasonous as well. She gushed to Schiff, “Russia meddled in our elections. Republicans haven't done anything to fix it,” adding, “Let's be honest. They are really helped by it. They are the party that Russia wants in power.”