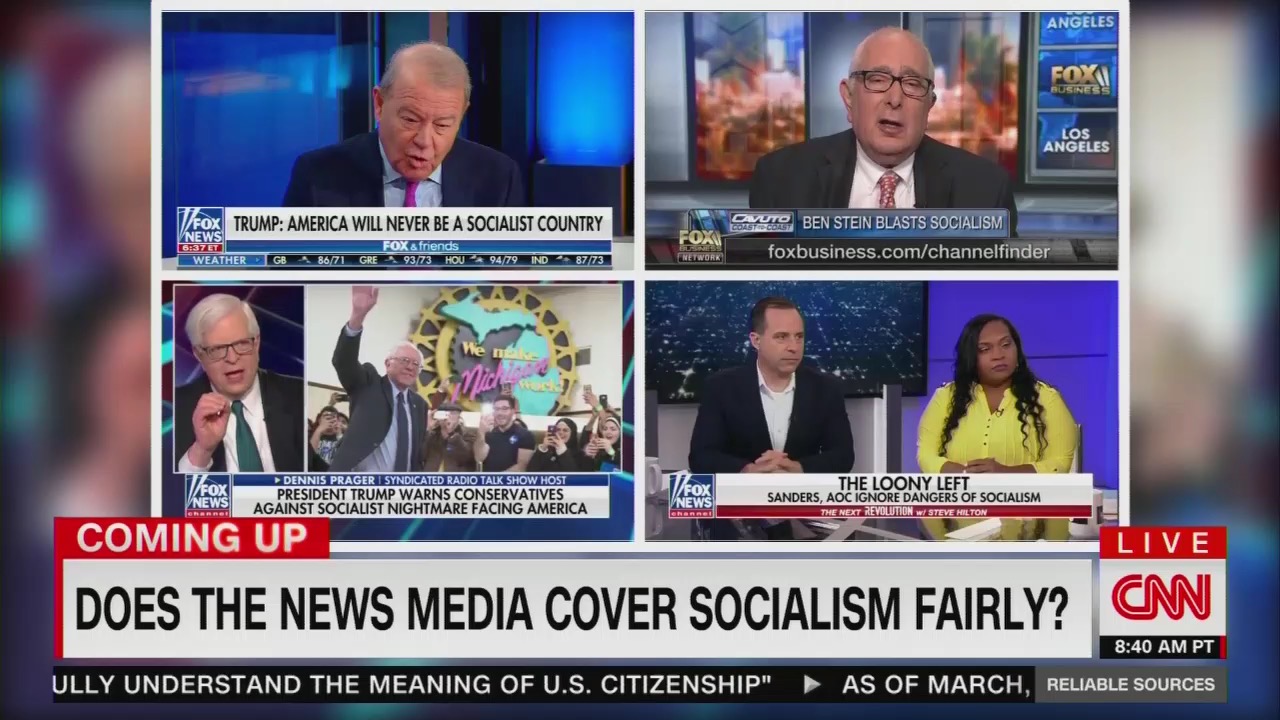 After the New York Times spent the 50th anniversary of Apollo 11 trashing America and touting Soviet Russia’s liberal values, it should come as no surprise that CNN would follow suit. Sunday, Reliable Sources host Brian Stelter brought on a socialist to explain to his audience why President Trump and Fox News were wrong; the left's embrace of socialism was all about “freedom” and saving America from “dangerous far-right populism.”

Leading up to the segment, Stelter set up the leading question with a chyron on screen reading, “Does the news media cover socialism fairly?” However, only stills from Fox News were shown.

After the break, Stelter sneered that President Trump’s “media allies” were fear-mongering about socialism:

After playing a few soundbites of FNC personalities warning about socialism, Stelter dismissed the warnings snarking, “Toxic. We get it.” He then introduced his guest, Bhaskar Sunkara, the founder of the socialist magazine Jacobin, whom Stelter gave free publicity to on his podcast just a few months ago.

The CNN host hyped the “growing popularity” of the socialist magazine, which Sunkara attributed as a response to President Trump and his “dangerous far-right populism.” Stelter went back to critiquing his network’s competitors at Fox News, playing another soundbite of Ben Stein arguing socialism was about “government control."

Sunkara claimed Stein was wrong, because socialism was really about “freedom,” explaining it as the “freedom” to allow government to make your choices for you. Stelter was enamored, gushing, “You are trying to change the conversation, it sounds like? You’re trying to reshape how socialism is defined in the United States. Because when you watch Fox, all you hear about is Venezuela!”

His guest claimed this was just the right trying to “scare monger people” because the majority of Americans agreed with their socialist policy ideas. Stelter didn’t push back against any of his guest’s claims.

He ended the segment by noting that while Breitbart and the Daily Caller had much bigger audiences than Jacobin, its audience was growing. He let his guest get in the last word, calling conservative media outlets warning about socialism, “fake news” and “propaganda.”

The only thing “reliable” about Stelter’s show is how often he defends socialists and attacks conservative media.