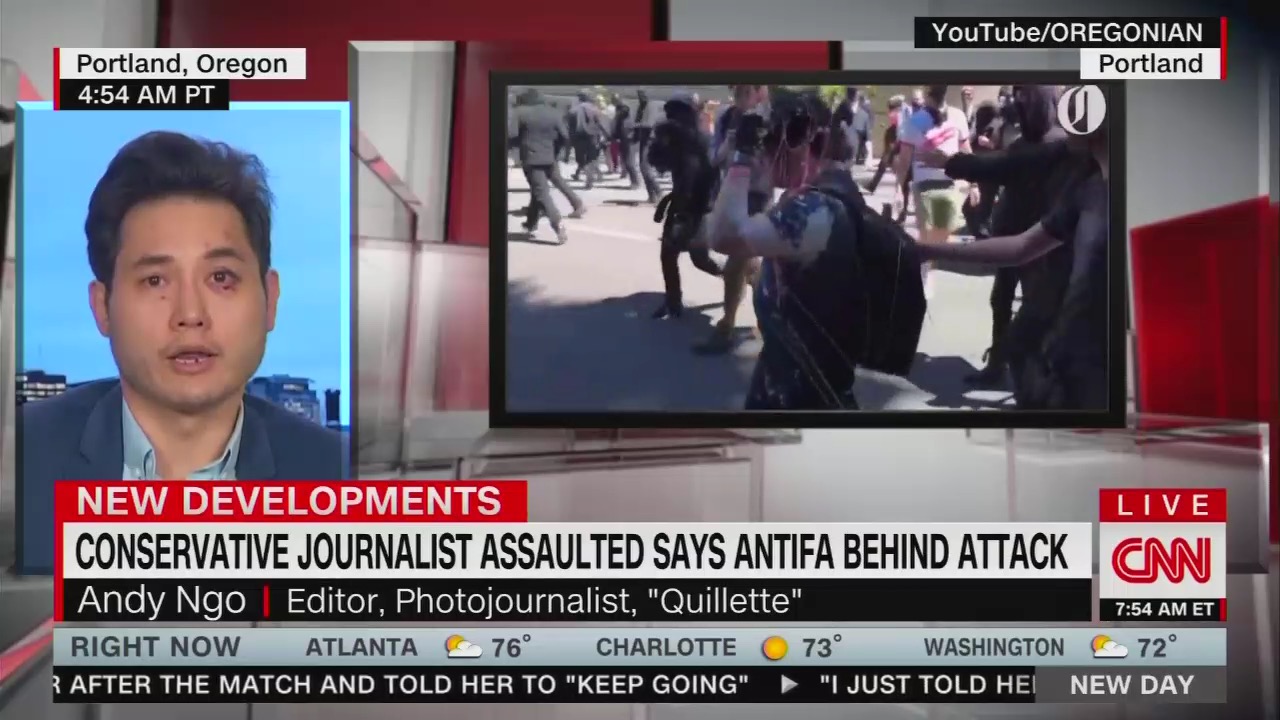 When you’re a liberal and you fabricate a ludicrous story painting conservatives as the violent aggressors with absolutely zero evidence, your story gets nationwide media coverage for weeks on end with little scrutiny. If you’re a conservative clearly attacked on video by leftists, with corroborating witnesses however, you story is given scarce attention and cast with doubt by the media. We saw that this week with Quillette journalist Andy Ngo, whose assault by Antifa members was captured on video, yet CNN repeatedly qualified the incident as just “his word.”

After most of the liberal media ignored the violent protests in Portland this weekend, which resulted in Ngo getting a brain hemorrhage after being attacked by a left-wing Antifa mob, Ngo was invited on CNN’s New Day, Tuesday morning. While hosts John Berman and Alisyn Camerota denounced the attack to end the segment, they didn’t call out Antifa for their history of violence. (Perhaps because their network has repeatedly defended the violent left-wing group over the past two years.)

Worse, the chyron on screen seemed to cast doubt that Antifa was responsible for the attack.

“Conservative journalist assaulted says Antifa behind attack,” the chryon read on screen (emphasis mine). First off, anyone with two eyes can see clearly what happened, it’s not a matter of he said or she said. Second, why the “conservative” qualifier? Would CNN have called Ngo a “liberal” journalist who “says” he was attacked, if this had happened at a Trump rally?

On Twitter, CNN tried to discredit Ngo again, tweeting that the journalist “says he was assaulted” by Antifa during demonstrations in Portland, despite a clear-cut video confirming his account.

Journalist @MrAndyNgo says he was assaulted by Antifa during demonstrations in Portland.

“This country, rightfully, is very tuned to knowing...when the right goes too far...I wonder if this country though is also attuned to when the left can go too far." https://t.co/H0GSIoFF1U pic.twitter.com/hcCi2aRlkm

The worst one though was this CNN headline from CNN’s website, which reads, “Conservative journalist blames Antifa for rally attack.”