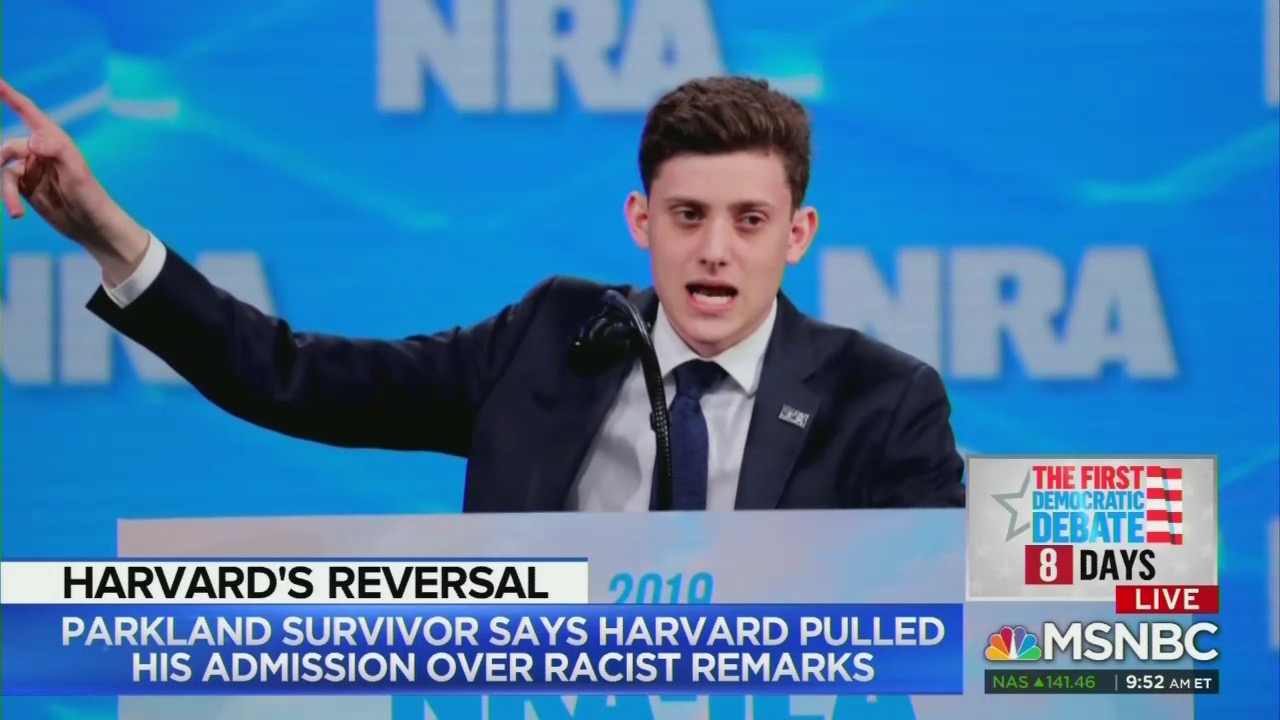 Parkland school shooting survivor Kyle Kashuv made headlines this week after he revealed Harvard had rescinded his acceptance into the Ivy league school after racial slurs he texted at 16 years old were leaked to the Huffington Post. A liberal mob called for the gun-rights activist to be punished for repeatedly using “n-word” in a group text with friends. On MSNBC Live with Stephanie Ruhle Tuesday morning, the host brought on race-baiting expert Eddie Glaude and anti-Trumper David Jolly to deny there was any anti-conservative bias in the matter, with Glaude slamming Kashuv’s white privilege, and Jolly arguing that Kashuv was dangerous.

"I think it's important that it sends a message to the broader public, that this sort of language, these sorts of beliefs and commitments cannot be sanctioned in the public domain whatsoever because we are so awash in this hatred now," he gushed.

Ruhle pointed out Kashuv was one of the few, pro-2A activists to come out of Parkland, asking Jolly if Harvard was “kowtowing to the left.” The former Republican congressman immediately denied that there was anything political with this decision, also swiping at Trump: "I don't….I think this is the perfect story for our time. Within our culture, we have leaders who are given greater permission to racist statements...They are given greater equity. It is important for Harvard to say, no the in our community."

Jolly also ranted about how one text revealed the teen had made a joke about school shootings, ironically one year before his own school was targeted. Shockingly, Jolly attacked Kashuv as having all the signs of becoming a mass shooter, claiming his stance on gun rights also made him a likely mass shooter:

[T]hese are the social media postings we see of a shooter and ask where were the signs?... We see a shooter. We go back and look at social media posts. This is exactly what we see...These are the exact posts we find of people, particularly those who advocate for stronger gun rights who has been given an audience with the president of the United States in the oval office, by Nikki Haley as well, vice president Mike Pence, an invited guest to a rally to speak for Matt Gaetz and Ron Desantis, who was a speaker at the NRA recently.

Finishing the segment, Glaude got one more rant in about how unfair this was to black kids...even though Kashuv was punished? Glaude compared how he was treated to the “innocent” Central Park Five teens:

"It's so interesting how innocence can be attached to certain bodies. Right? Here you have a kid that is 16 years old. Central park Five. One of them was 14. We have people who are -- they want to attribute innocence to certain folk but want to deny innocence to other folk."