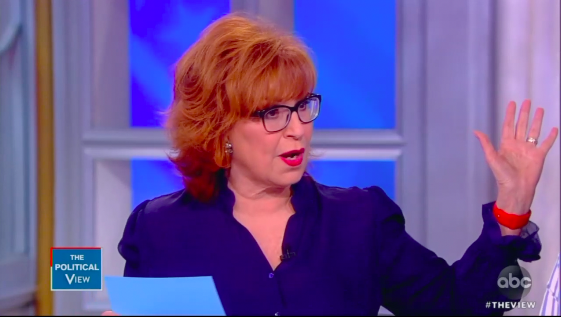 Friday on The View, co-host Joy Behar practically begged her guest, 2020 presidential candidate Senator Amy Klobuchar (D-MN), to impeach President Trump. Behar fretted over the Treasury Department not handing over Trump’s tax returns, and the subpoena to Donald Trump Jr. as examples of the administration skirting law and order. Along the way she made some false claims, as is typical of hosts on The View.

Behar began by falsely claiming that Trump Jr. ignored his subpoena to testify before the Senate. In reality, he has already agreed to testify. It seems The View co-host hasn’t caught up with the news. She ranted irrationally that ignoring subpoenas had “never” been done before and that somehow made us a “third world country”:

“Ignoring subpoenas. [Steven] Mnuchin, the Treasury Department. [Donald] Trump Jr. He was told, Trump Jr., to ignore it by Senator Lindsey Graham. I’ve never heard of such a thing in this country! [William] Barr cracking jokes about getting handcuffed by [Nancy] Pelosi. I mean, what is that? And then today we’re hearing that Michael Flynn admitted that Trump’s lawyers tried to obstruct the Mueller investigation....What are the Democrats going to do? I realize that you’ve have limited power because we only have the House. But you’ve got to do something! This country is becoming a third-world country. Where are the laws?”

Someone might want to alert Behar that’s no longer a “PC” term, and that it's not true that ignoring subpoenas has never happened before. The Obama administration ignored congressional subpoenas numerous times. Obama’s Attorney General Eric Holder was held in contempt for refusing to turn over documents about the Fast and Furious scandal. Former Assistant Attorney General and current DNC chair Tom Perez ignored subpoenas about using his private e-mail for government business. Obama’s HHS ignored subpoenas about ObamaCare. Where was Behar’s outrage then?

Fellow co-host Sunny Hostin tied all of this to impeachment, eagerly asking Klobuchar, “Is impeachment completely off the table?” Klobuchar relieved the hosts by telling them, “No, it’s not off the table at all. It’s something the House is going to have to decide,” she said.

“What’s the downside to impeaching him?” Behar proposed.

Klobuchar went on to spread liberal conspiracy theories that Republicans were trying to stop people from voting. Behar really, really wanted Democrats to impeach Trump though. “Isn’t the impeachment process a way to expose all of this on a higher, larger basis, on television, on social media? People need to know all of this!” she urged.