‘View’ Gets Beto to Apologize for His White, Male Privilege; Presses Him From Left on Policy 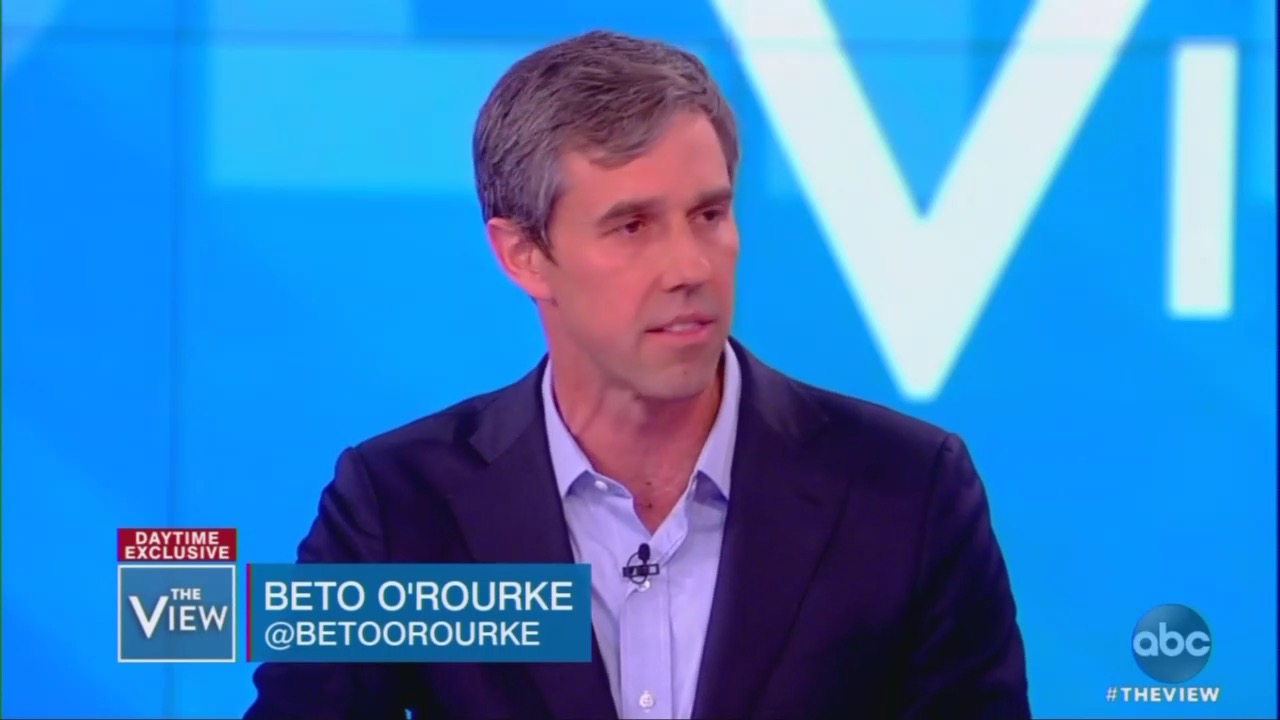 2020 Democratic presidential candidate Beto O’Rourke is trying to win back the media’s favor after Pete Buttigieg replaced him as the media’s favorite shiny new penny. Tuesday, he “re-launched” his presidential campaign on The View, going on an apology tour for not fully acknowledging his “white male privilege,” as he was pressed nearly entirely from the left on policy from the co-hosts.

Immediately after O’Rourke came out he made the co-hosts blush by speaking a little Spanish. Latina co-hosts Sunny Hostin and Ana Navarro fawned over that. Navarro gushed, “I think he’s trying to impress us!” Smiling big, Hostin agreed, “I’m impressed!”

After making his presidential pitch, the co-hosts asked some standard questions about his experience level before veering to the left, grilling O’Rourke on his glossy Vanity Fair cover, and statements about being “born to run for President” as examples of his white male privilege. Even Meghan McCain took him to task for these comments, asking if he “regretted” launching his campaign this way.

“You're right, there are things that I have been privileged to do in my life that others cannot. And I think the more that I travel and listen to people and listen from them, the clearer that becomes to me,” he began his long-winded answer. He went on to propagate the myth of pay inequality, and systematic racism, and finally admitted he “regretted” “reinforcing that perception of privilege.”

In a lightning round, the co-hosts also pressed from the left, asking if he supported cash reparations, universal healthcare, abolishing I.C.E., and our current asylum system. O’Rourke gave the typical support to these, with some caveats. He only faced one question from the right towards the end. McCain asked him about his support for taking down the border wall around El Paso, Texas. She asked, “Is your view that we should just accept anyone into our country who claims asylum, even if they aren’t under direct threat, and if that’s your view, why do we even have a border?”

The Democrat largely dodged answering the question, instead appealing to how Americans should have more empathy for immigrants rather than concern for the safety of our own citizens:

“But when we think about those who made that 2,000-mile journey, fleeing the deadliest countries on the face of the planet, doing what we would all do faced with the same decision, no wall, no militarization, no cages, no cruelty is going to address that,” he gushed, adding that we needed to keep our current asylum system and treat everybody with dignity and respect.