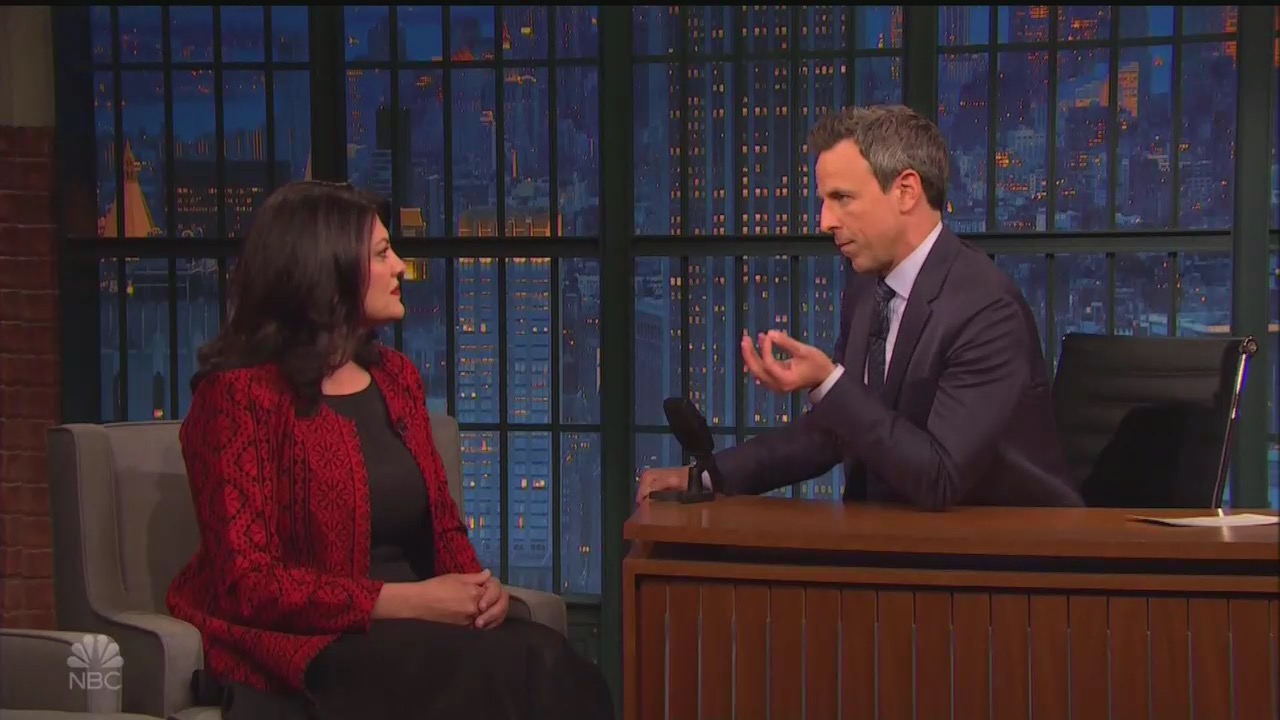 NBC’s Late Night host Seth Meyers has made it his mission to defend anti-Semitic Democrats lately and condescend to everyone offended by their rhetoric that they are just too ethnocentric to understand the good reasons why these Dems hate Israel and Jews. After playing Democrat Rep. Ilhan Omar’s publicist last week during an interview with Meghan McCain, Meyers was back at it Monday night defending Rep. Rashida Tlaib’s shocking comments on the Holocaust.

Meyers began by giving the Democrat a platform to defend herself by “giving context” for her comments she made last week. On a podcast, Tlaib claimed that she was “calmed” thinking about Palestinians who supposedly created a “safe haven” for Jews after the Holocaust. In reality, Palestinian leader Grand Mufti Haj Amin al- Husseini was an anti-Semite and ally to Adolf Hitler and Palestinians were trying to stop Jews from fleeing Europe to Palestine.

“‘Rashida Tlaib is either completely ignorant of the history or is a deliberate liar’, charged Prof. Benny Morris, one of the leading scholars of British Mandatory Palestine, the creation of the State of Israel in 1948 and the War of Independence.” https://t.co/VJRweO2H9T

But instead of demanding his guest to apologize for her offensive comments and revisionist history, Meyers let her double down on her comments:

“You have said that it was taken out of context I want to give you a chance to provide some context,” he offered.

Tlaib explained that her Palestinian grandmother lived in the “occupied” West Bank and again claimed that Israel was created to “create a safe haven for Jews around the around” and allegedly her ancestors had given up their lives, land and livelihoods to do that for them.

She followed that up by slamming her critics as “racist idiots” with a “fourth grade reading level:”

And it was unfortunate you know, I got a text message from a friend who's like, "Hey, next time, you know, really clarify. Maybe talk like a fourth grader. Because maybe the racist idiots would understand you better. [ Laughter and applause] so it's just - you know, I will continue to speak truth to power and continue to uplift my grandmother through love and that's all I can do, is continue to share the human impact of what it means to be Palestinian in the occupied territories.

Meyers gushed, how “nice” it was to have a Palestinian in Congress to give “the Palestinian perspective” that we could all learn from:

“I actually think it wouldn't hurt for all of us to talk about the history of that part of the world on a fourth grade level because I actually don't think a lot of us here understand it and I think that there's a very, very bad faith argument was made today that you were calmed by the Holocaust,” he said apologetically, adding, “I think there was a good faith argument that maybe your history did not -- was not in alignment with everyone else.”