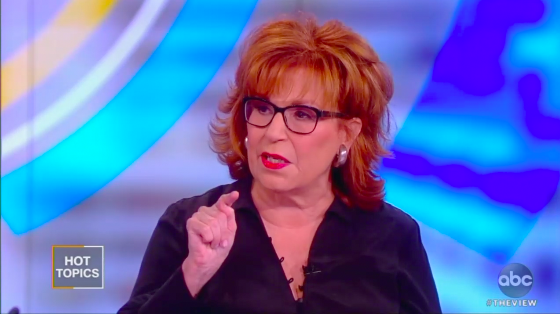 Following a one-week hiatus, the liberal hosts of The View had a mini-meltdown over the results of the Mueller report, at Monday’s Hot Topics table. Co-host Joy Behar was adamant that the big mistake here was on Mueller’s part for not forcing President Trump to sit down for a one-on-one interview or testify before Congress. She angrily ranted that had he done so, Trump would have lied for sure and would’ve been impeached “automatically.”

Behar revealed her utmost disappointment over the results of no collusion, whining to the table, “Can I say that I was very disappointed with the the fact that Mueller didn't actually interview Trump?”

Her co-host Abby Huntsman agreed that would’ve been “very dangerous” for Trump. That was all the ammunition Behar needed to go on a tirade, arguing her absolute belief that Trump would have committed perjury and been impeached like President Clinton, had his lawyers not “impeded justice” by insisting on written answers instead of an in-person interview:

That would have been the nail in the coffin. He would have committed perjury and would’ve been impeached automatically. So I am disappointed in that. The answer he gave was it would take too much time and it would go into some kind of legal proceedings that would get convoluted. I say so what. They did it to Clinton. Why can’t they do it Trump? Because his lawyers impeded justice in my opinion by not allowing him to sit down. They knew that he would commit perjury because he is a liar.

Later in the show, the hosts sat down with Senator Mike Lee (R-UT) where the hosts talked to him about his comments on climate change, Trump’s immigration policies and the Mueller report. On that last one, Lee argued how no collusion was found so it was time for the country to move on. Huntsman did push him on if his opinion would be different had Trump been a Democrat:

“If it were a Democrat president and the same report came out, would more Republicans be up in arms about what they read?” she asked. Lee admitted some in his party would be calling for impeachment but he didn’t think that was the right response, referring to the backlash his party got over Clinton’s impeachment. Joy Behar was perturbed over the comparisons to Clinton, claiming that was just about “sex:”

“The Republicans impeached President Clinton because he had a sex escapade!” she slammed, adding with disgust, “This is worse than that. That was just sex. This is obstruction of justice. This is about the Constitution. This is about collaborating with the Russians. Come on!” Behar rolled her eyes.

Huntsman soberly cut in to correct her co-host. “I thought President Clinton lied under oath?” she pointed out. Also unmentioned: obstruction of justice.

“That was the charge,” co-host and legal analyst Sunny Hostin admitted.

Behar conceded that part, but went back to her earlier argument that all that mattered was that Trump was a liar and that he would be impeached too if he testified before Congress: “He did. But as I said before, Mueller didn't put him on the stand so that he could lie under oath!” she ranted. Co-host Meghan McCain shut her down, saying she’s rather hear what Mike Lee had to say, as they moved on.