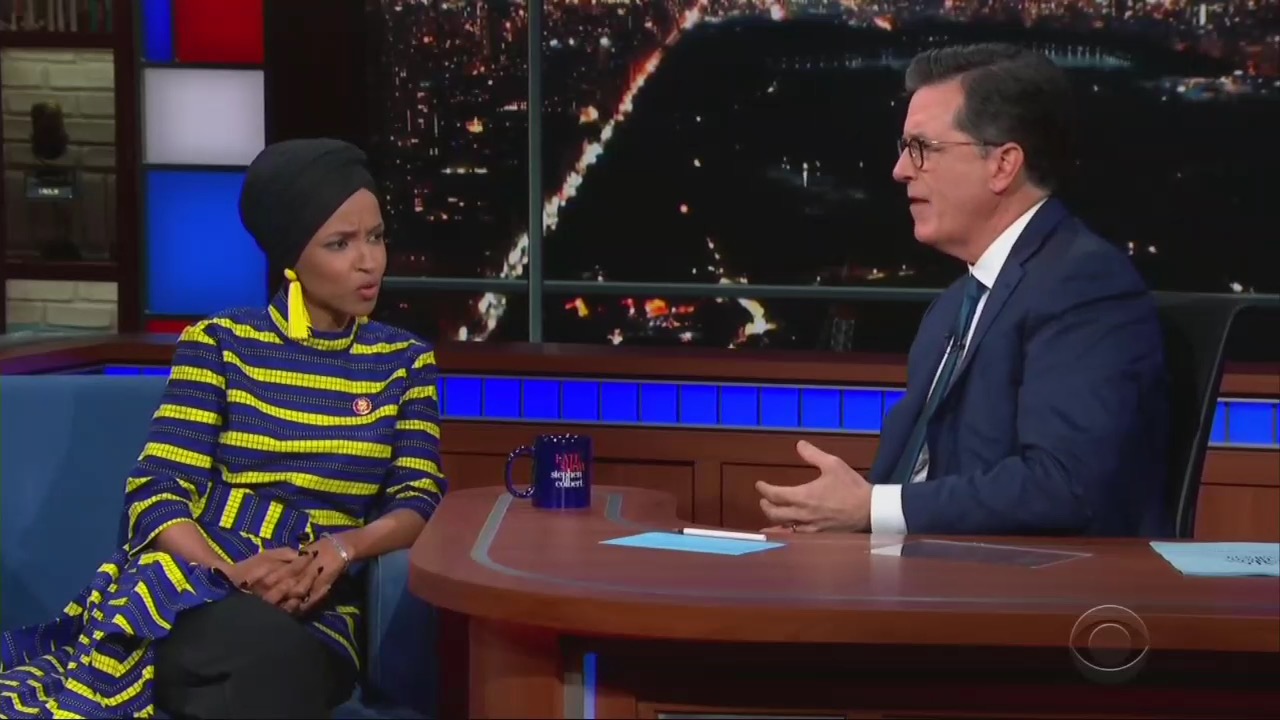 After being the face of a celebratory Newsweek cover this week, Democratic Rep. Ilhan Omar from Minnesota appeared on the Late Show Wednesday night to get the star treatment yet again. The controversial freshman Democrat was in trouble again this week for making audacious comments about 9/11, but she was safe from any criticism from host Stephen Colbert. He didn’t even ask her about this, instead, egging her on to attack Fox News for daring to air these comments that the rest of the media largely ignored.

Colbert briefly rehashed Omar’s controversies, leaving out one of the worst ones. In a speech before the Council of American-Islamic Relations’ (CAIR) last month that just resurfaced online this week, the Democrat outrageously called the deadliest terrorist attack on American soil as simply the event where “some people did something.”

Ironically, both Omar and Colbert called out Fox News for criticising her for this very statement, but intentionally didn’t mention what she actually said. Colbert deflected any responsibility Omar has for her own comments, saying Democrats used her as a “political cudgel:”

“What was that process like? What was it like to... Be a cudgel like that, being used as a political cudgel right when you began your service?” he asked sympathetically. After briefly explaining, not apologizing, over those past comments, alleging she just didn’t “understand” that what she was saying was wrong, she swiftly shifted to attack Fox News:

“So when you have people on Fox News that question whether I am actually American or I put America first, I expect my colleagues to also say, "That's not okay." They should call that out!” Omar gushed.

“On the Fox and Friends this morning,” Colbert helped out.

Omar continued ranting, saying they should be off the air for criticizing her:

And-- and this kind of double standard really is quite, you know, offensive, and is very much embedded in a lot of our culture these days, where you will have people get-- come after minorities for things that they say, they might have insinuate, but no one goes after people like the folks on Fox & Friends, that actually say those words. It's not about insinuation, right? They actually said that I might not be an American. My loyalties might not be to this country. But I get called out. They don't. They get to keep their show.

Colbert added that it was “unfair” that she “gets attacked” for saying things that he would say on his show, like calling Stephen Miller a white nationalist. Colbert griped it was probably because she was a Muslim woman: “But also I think because you're a Muslim, because you're a woman, because you're a person of color, you're given less latitude than somebody like me,” he gushed.

“You see this outrage when I speak the truth. Everyone else's truth is allowed but my truth can never be."