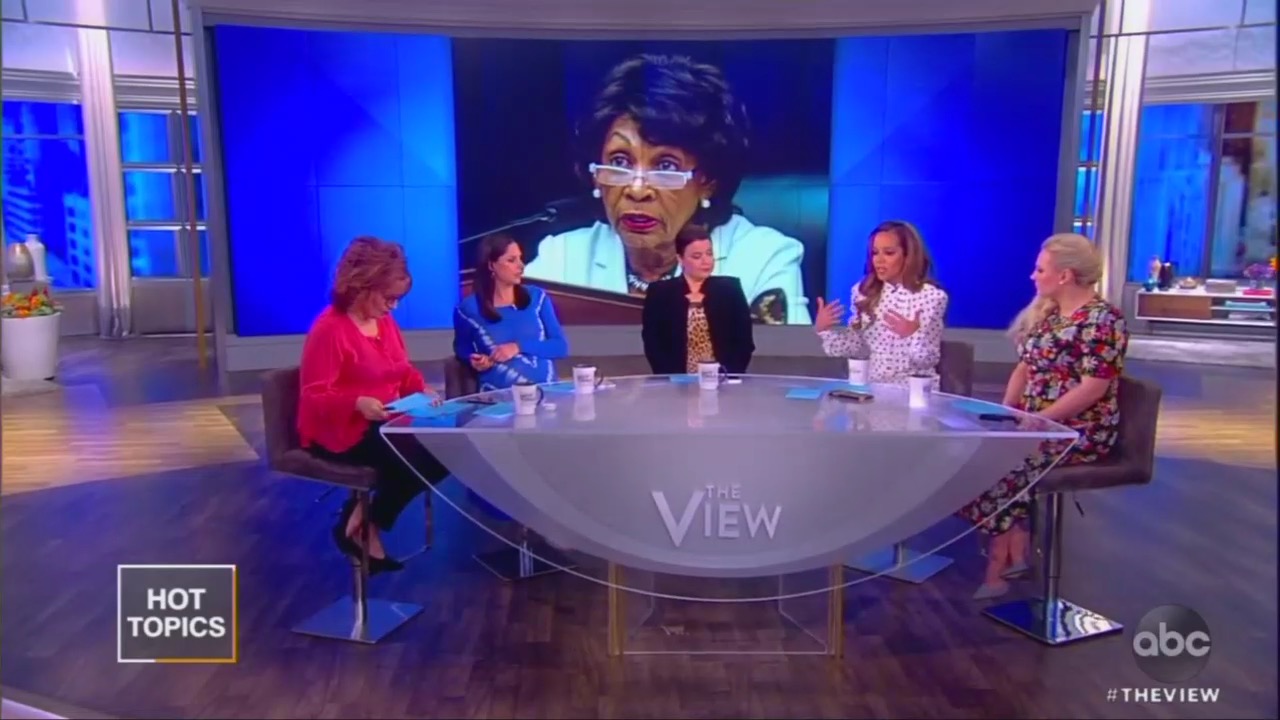 Wednesday on The View, the co-hosts argued about the combative exchange between Treasury Secretary Steven Mnuchin and Rep. Maxine Waters that happened during a committee hearing Tuesday. When the Democrat committee chair wanted to keep questioning Mnuchin, despite a previously agreed upon ending time, the two had a fiery exchange that prompted View co-hosts Sunny Hostin and Joy Behar to gush about how amazing “Auntie Maxine” was for shutting down the Secretary.

After playing the clip of the two arguing, Joy Behar grinned and praised, “I think the lesson here is don't mess with Auntie Maxine!”

Waters is best known lately for encouraging the public to harass and bully Trump administration officials. Despite this, Sunny Hostin claimed she was a “symbol of decorum” and “setting the tone,” and Mnuchin should’ve just sat down and shut up:

SUNNY HOSTIN: I don't know when people just won’t stop and realize that she always has time to teach. You know, she’s been I guess, a Congresswoman for 25 years, over 25 years. Remember when she had that exchange where she kept on saying, I'm reclaiming my time, that was with the same person, with Mnuchin. So I think they've had this back and forth thing going. Now she's actually the chair of the committee. She's in charge. She's responsible for decorum and setting the tone. I thought it was very disrespectful that he was trying to take the power away from her. She reminded him I thought quite well that she is the one in power.

HOSTIN: I don’t want it to be about sexism but I wonder if he would have treated a man the same way.

But co-host Abby Huntsman took umbrage at that argument, shooting back, “When I think about decorum and inspiration and bringing the country together, Maxine Waters is not who I think of for that.”

“How is that supposed to bring us together as people? If you see General Mattis, who’s no longer there but at this time, at the restaurant table next to you, you tell him he’s not welcome here, get out? A man who served this country?I don’t think that rhetoric is making us better people.” she stated. Despite this, Hostin clung to her affection for the anti-Trump Democrat congresswoman.

After more back-and-forth, she ended the segment by complaining that what Waters said in the past wasn’t relevant.

“We're talking about things that perhaps Maxine Waters said outside of this hearing. Why don’t we talk about what happened in the hearing which is Mnuchin being disrespectful to the chair of that committee!” she gushed as Behar cut to commercial.