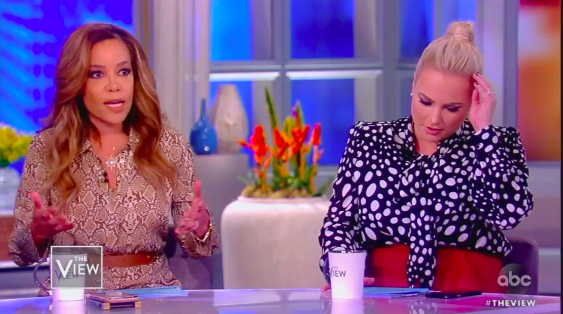 While lately co-host Meghan McCain agrees more than disagrees with her liberal peers at The View, Tuesday that changed when the Republican got into a shouting match with three of her co-hosts over a very familiar argument: the idea that the former administration was untainted by scandal.

The topic got brought up during a discussion on a report claiming 25 officials within the White House were given security clearances despite being “denied” or not being worthy of them. Co-host Abby Huntsman pointed out that Republicans would be all over this story had it happened under Obama. That drove Joy Behar to point out that Obama was “scandal-free.”

“And none of this happened in the Obama -- the minute people say if this was Obama. Nothing like this even remotely close ever happened in that administration. Completely scandal-free!” she gushed.

Meghan McCain started cracking up, which prompted Behar to ask, “Do you know a scandal? Can you name a scandal?” McCain declined, saying she didn’t want to get in an argument. But after Behar kept pressing, she dove right in.

“The Iran deal. Number one. I mean, billions of dollars in unmarked bills in the middle of the night given to Iran," she began.

“That was their money!” Behar countered. McCain kept deflecting, getting back to the topic of conversation when co-host Ana Navarro stepped in to defend Obama.

“I'll give you an Obama scandal. He wore a tan suit. Michelle showed her arms. And he ate Grey Poupon! That’s it!” she gushed. This is a debunked claim from the left and one the liberal hosts have made before. That bait finally got McCain who went into a tirade about how much she hates Trump but that liberals paint a rosy picture of the Obama administration:

“The problem is when you put the Obama Administration up as this pristine, scandal-free, perfect administration that never did anything wrong,” she began before co-host Sunny Hostin interrupted. “But it was pretty scandal-free,” she insisted. McCain shot back, “There are a lot of policies that were put into place that rational conservatives disagreed with.”

As the two continued to argue over each other, Joy Behar tried to cut in to go to commercial. Completely serious, Behar said, “We can ask Valerie Jarrett about it when she comes on,” (Jarrett was their next guest.)

Here at NewsBusters we have extensively covered the scandals the media chose to ignore while President Obama was in office.