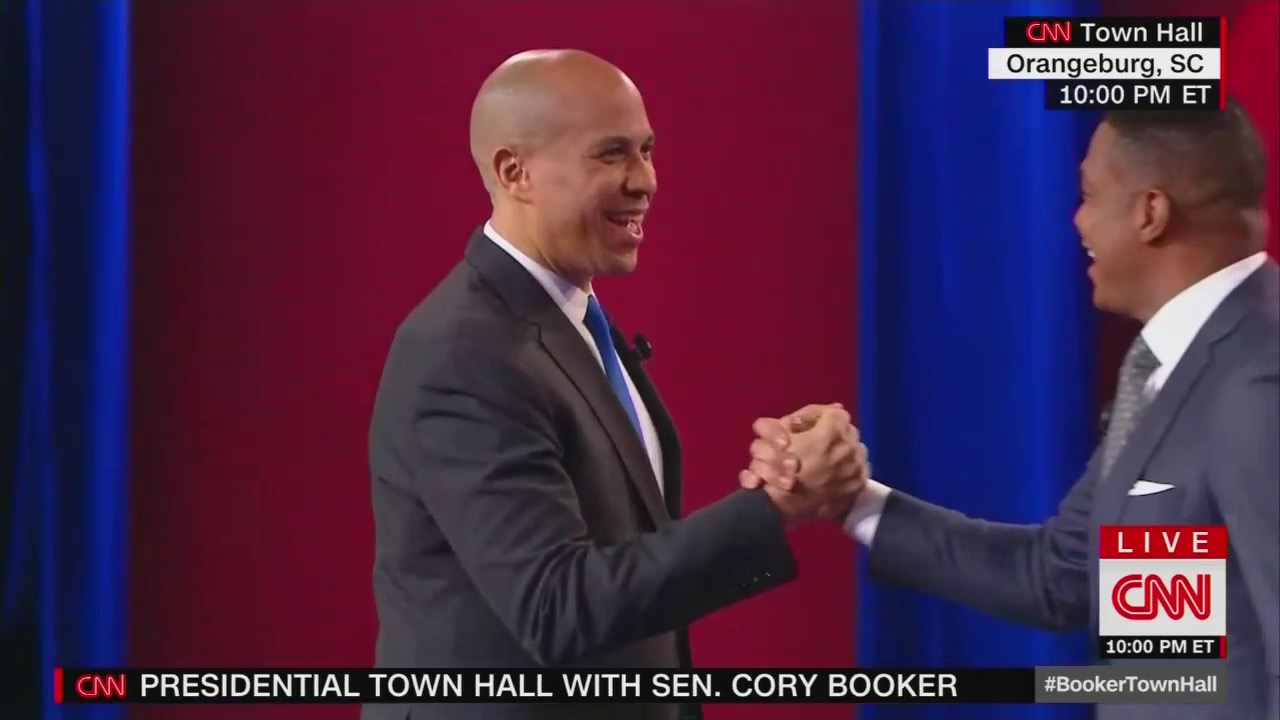 CNN has been hosting a series of town hall events for 2020 Democrats and it was New Jersey Senator Cory Booker’s turn Wednesday night. He received a very friendly welcome from CNN host Don Lemon, who gossiped with him about his personal life and was even caught congratulating him on a hot mic, as the network cut to commercial.

Don Lemon opened the town hall with a hard-hitting question that Democrats can expect from the tough journalists at CNN. “You’re a vegan. What’s that like?” Lemon giggled with Booker.

Things only got cozier as the town hall went on. Lemon gushed about their bonding experience in doing DNA tests to find out more about their ancestries.

“You've been on my mind all week because I've been reading your book,” Lemon admitted. Booker gushed back, “You texted me about that!” before they started discussing their findings. Afterwards, Lemon got even more personal, asking Booker about his actress girlfriend.

“You would be the first unmarried president in over 130 years. What are the odds that we would see a wedding in the White House?” Lemon teased. After a big chuckle, Booker joked back, “Is this CNN or TMZ?”

Once it got to the audience questions, the town hall became less tabloid-y but not any less cushy for the Democrat presidential candidate. The majority of the questions Booker received were questions out of the progressive playbook, from police brutality, to protecting blacks, illegal immigrants, and the LGBTQ community from the “wrongs” they supposedly suffered under the Trump administration.

After one such answer, where Booker slammed Republicans for trying to stop blacks from voting in the midterms, the CNN host was so impressed that he gushed, “Yeah. I can see that you’re warmed up. You’ve been out on the campaign trail.” After cutting to commercial, the cameras started to pan away but you could distinctly hear Lemon on a hot mic congratulate Booker.

“Nice job, nice job,” he said, shaking hands with the politician. Not exactly a professional and impartial response from a journalist.

Perhaps that should come as no surprise, considering how CNN journalists spent twelve straight minutes swooning over Booker when he announced his run last month.

While mostly lobbing softballs, Lemon did sort-of press Booker on his reaction to the Jussie Smollett hoax.

"You originally said that it was a modern day lynching before saying you needed more information. You know the mayor of Chicago states it was a hoax. He's calling it a whitewash of justice. Is that what happened here?" he asked.

What did Booker say to that? Well of course he found a way to give credit to Smollett’s hoax, warning about the very “real” threat and rise of white supremacists in this country and blamed Trump.

HT to The Free Beacon