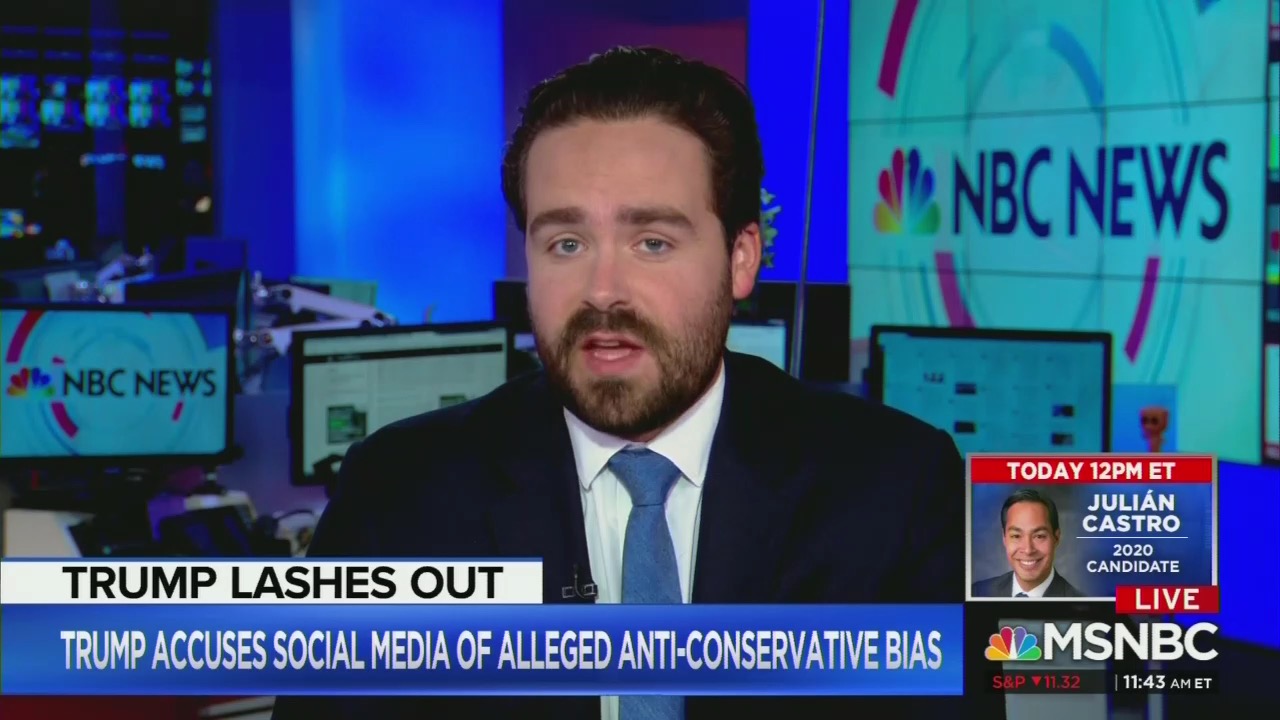 Wednesday on MSNBC, NBC senior media reporter Dylan Byers scoffed at the notion that some conservatives were being targeted on social media platforms, calling it a “comical” conspiracy theory that in reality, “does not exist.” These comments came in response to President Trump attacking Twitter and Facebook for anti-conservative “discrimination” Tuesday and after Republican Rep. Devin Nunes put out a lawsuit against Twitter for “shadowbanning” his account in 2018, among other concerns.

On MSNBC Live at 11AM EST Wednesday, fill-in host Chris Jansing teed up her guests, Dylan Byers and contributor Charlie Sykes to explain how nutty and irrational conservatives were being over this whole social media censorship issue:

“Dylan, are these legit concerns from the White House or is this platform simply abiding by rules and regulations and they're imperfect?” she asked. Of course, she already knew what answer Byers was going to give.

“It's absolutely not a legitimate complaint from the White House,” he began, before going on to call it a crazy conspiracy theory by people who don’t understand technology:

It's basically with all due respect to the president and to Dan Scavino, it's basically the equivalent of when your sort of crazy uncle calls and tells you there's a conspiracy theory against him because his computer isn't working. It's effectively the equivalent of opening too many browsers on your screen and then your computer crashes. The appropriate response is not to keep trying to open browsers on your screen but rather to just step away for an hour and then reboot it. That's effectively what happened here.

Byers emphasized again how bias against conservatives “does not exist” on social media platforms:

You know, in this day and age in 2019, tech has become such a great scapegoat and such a great target for myriad reasons. Some of them legitimate having to do with issues like data privacy, hate speech, fake news, and then for some of them that are quite illegitimate having to do with conspiracy theories about sort of anti-conservative bias, which I can assure you at global companies operating at the scale of a company like Facebook just quite honestly do not exist.

Host Chris Jansing pointed out that Nunes’s lawsuit names parody accounts that targeted him, and if he wins, that could have a big impact on people who are critical of politicians on social media. Byers agreed, but added that the idea that conservatives were being targeted to begin with was just “comical” and kooky:

This is how Twitter works. There are parody accounts. There are accounts that will be critical of you. There are accounts that make jokes at your expense. We can sort of spend a long time debating whether or not that's positive or negative for society, but the idea that somehow Nunes or conservatives are being targeted by what is very much a content agnostic platform is just sort of comical on its face. I think it makes you have to wonder like what world does Representative Nunes live in where he believes this stuff?

While Byers may be right in that not every case raised is a result of bias, the sheer number of conservative pundits and organizations that have had their profiles, pages or channels taken down, flagged or punished in some way for no clear reason is a phenomena that can’t be dismissed by serious journalists as a silly “conspiracy theory.” Even liberal and mainstream media outlets have noted cases where conservatives were intentionally targeted by employees at Facebook.