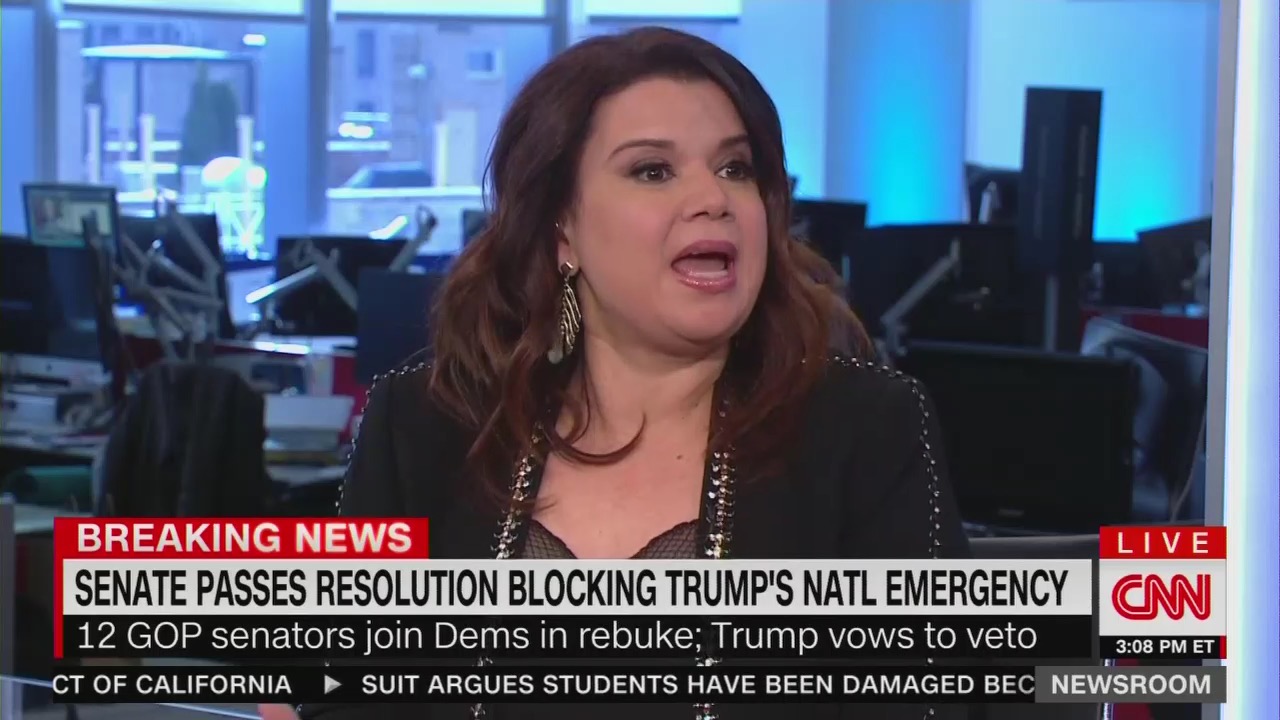 CNN really loves anti-Trump Republicans, so who better to bring on to discuss the Republican rebuke of President Trump, than their most vocal Never Trumper? Host Brooke Baldwin welcomed Ana Navarro’s hot take in the 3pm EST hour Thursday after twelve Republicans sided with Democrats in blocking President Trump’s declaration of a national emergency at the border. Predictably, Navarro only had nice things to say about the “symbolic” rebellion from the right, gushing that even if they lost their seats in the future that it was the right step to take.

After reports from Manu Raju and Kaitlan Collins on the twelve Republican senators who defected, which included Trump critics such as Mitt Romney, Lisa Murkowski and Susan Collins, Baldwin turned to her guests, political analysts Ana Navarro and Dana Bash to get their take. To Navarro she posed, “You have seen the list of the twelve who have rebuked this president. Your biggest surprise?”

Painting with a broad brush, Navarro called all the other Republicans “hypocrites” for opposing executive actions by President Obama, without giving any examples of where the two situations were the same:

She went on to tout the Republican congressmen who lost their elections over their opposition to President Trump, as “courageous:”

“I will tell you it does take a great deal of courage to go against Donald Trump. We saw what he did in 2018 with Republicans that were not loyal to him, whether it was Mia Love or Carlos Curbelo. Not only did he participate in beating them, he then danced on their political grave,” she said adding references to the late John McCain.

Dana Bash pointed out that Congress didn’t have enough votes to overturn the president’s impending veto. Still, winning was less important than being right, to Navarro.

Ranting against how Trump requires loyalty (shocking!), she praised the Republicans who were willing to lose their loyalty with voters over their opposition to Trump. “The fact that they did this knowing that they were probably going to lose,” she began as Baldwin cut in.

“They were going to join the list in the little black book!” Baldwin snarked.

“For me, this is a glimmer of hope,” Navarro gushed to end the segment.

Well, of course that’s how a CNN analyst would feel about the situation. Republicans who give Democrats what they want, and who may also end up losing their seats in Congress, while they’re at it? A win-win for the left, and for CNN.