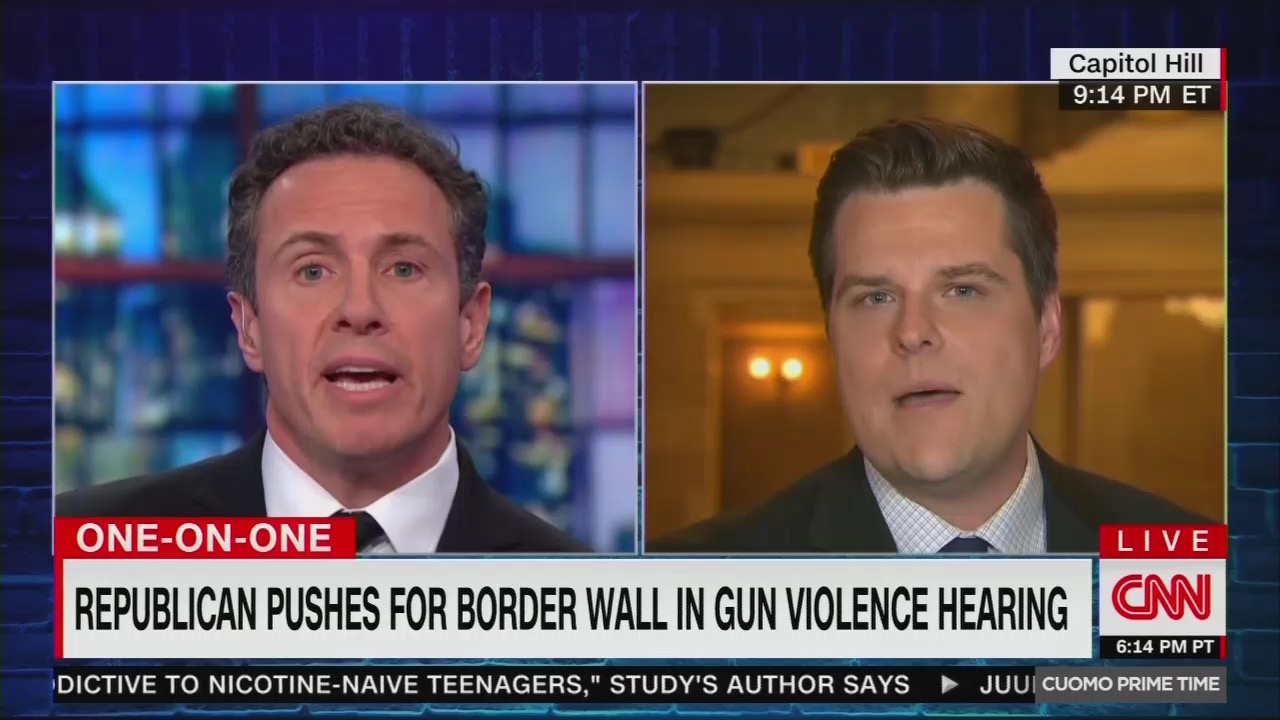 Republican Rep. Matt Gaetz of Florida appeared on Cuomo Prime Time Thursday evening to give his side of the story, after CNN spent all day demonizing him as trying to throw out a Parkland victim’s father at a judiciary hearing about illegal immigration. Gaetz slammed CNN of deceptively editing the encounter and the heated conversation culminated in Cuomo losing his cool, accusing Republicans of wanting dead Americans due to illegal alien violence.

After playing the video clip of the hearing, Gaetz explained that the father was being extremely disruptive and intimidating the fellow victims in the room and that is why he asked the chairman what the protocol was when someone was being repeatedly disruptive. Cuomo took issue with Gaetz’s argument that a lot of gun violence could be prevented by better border security, because it would stop illegal aliens from committing these type of violent crimes.

“Why is it that those people that were killed by guns from illegal aliens -- I know you're not saying they're any less relevant. So why is it that your network tries to creatively slice and dice that audio to make it look look I was trying to throw a guy out?” he confronted Cuomo. Cuomo conceded that Gaetz might not have been trying to throw him out, but kept pressing that a wall had “no business” in a discussion about shootings and crimes. Gaetz set the record straight with Cuomo on illegal alien crime.

“Do you realize that one out of every five people that the federal government charges with murder is an illegal alien?” he stated.

As Gaetz started to cite more numbers, Cuomo dismissed his arguments by clinging to the one CATO study about immigrants that the network has cited about a zillion times, that found immigrants commit less crimes than citizens. The two went back and forth about requirements for purchasing guns, with Gaetz again calling out CNN for omitting comments he made in the hearing about cleaning up existing gun laws and supporting state rights on background checks.

“No, Chris. I did not just talk about that wall. That's just how you edit it....the inference that somehow, if you're talking about guns and violence, you in no way can talk about illegal immigration, that you just have to have that off the table for discussion is ludicrous,” he stated.

Cuomo, however, was just getting started. He then accused Republicans of only caring about mass shootings, not other kinds of gun violence, because they got “their attention:”

“[I]f you're going to talk about stopping the mass shootings which seem to be the only kind of gun crime that anybody cares about in this country,” Cuomo stated, adding, “It is because you guys never talk about it, it’s only mass shootings that get your [Republicans] attention.” Gaetz argued that American families would say differently.

“I’m talking about politicians and responsibility to do something about it,” Cuomo seethed, adding, “You guys have never done a damn thing until it became a tool of opportunity to talk about immigration!”

The two kept arguing as Gaetz urged that a border wall would help prevent gun violence, a point Cuomo wouldn’t cede. The CNN host, sounding more and more like a liberal activist, then blamed Republicans for wanting dead Americans just to prove a political point:

CUOMO: The only ones you guys will even discuss.

GAETZ: I discussed three other shootings.

CUOMO: They're an article of convenience for you now Matt.

GAETZ: You think it's convenient for us that people are dead at the hands of illegal aliens?! You think that we are that craven?

GAETZ: That is so irresponsible!

CUOMO: It's irresponsible of the people that are doing it. You put a premium on certain lives and not others.

GAETZ: That's like saying Democrats want there to be more school shootings so they can have gun control. That would be ludicrous--

CUOMO: That's what you say all the time.

The conversation didn’t get much better from there, with Cuomo again exclaiming that President Trump had created a “brown menace,” with his fight to stop illegal immigration.