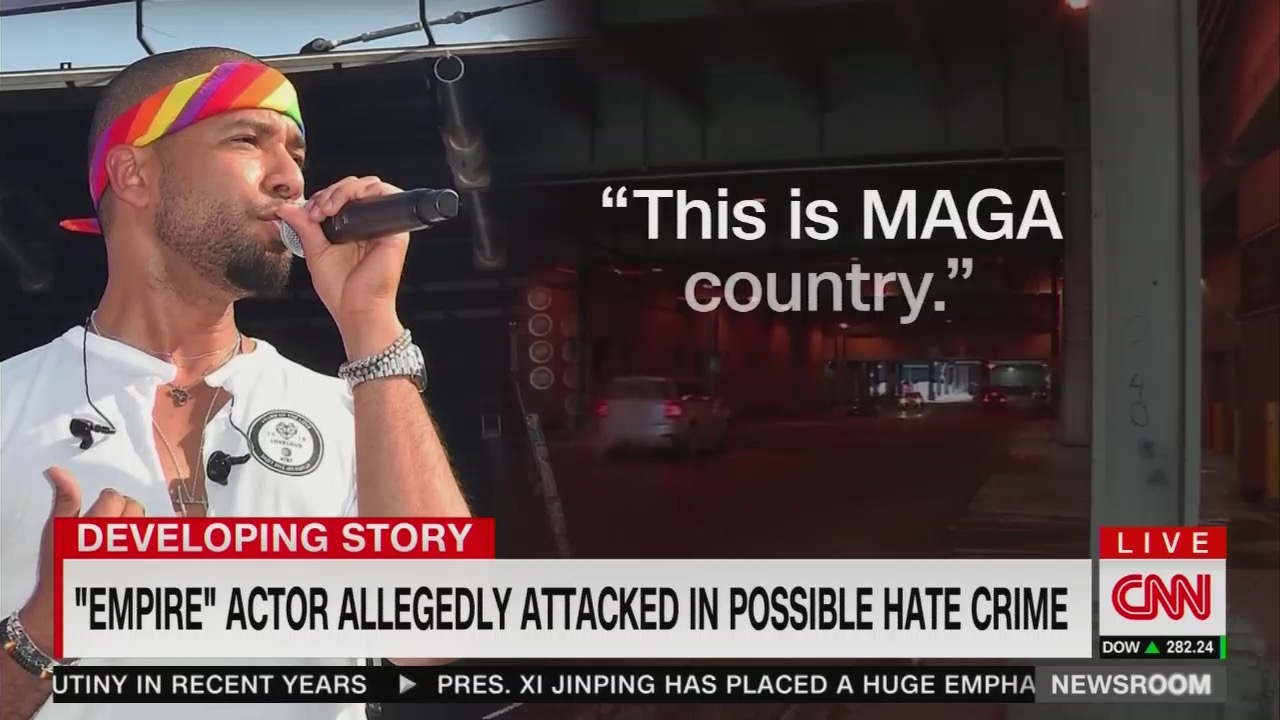 The networks along with cable news Wednesday morning continued reporting on the alleged hate crime against black, gay Empire actor Jussie Smollett by Trump supporters, that he said happened at 2 AM Tuesday morning. Despite Chicago P.D. stating that they have scoured through hundreds of hours of security camera footage and haven’t come up with any evidence supporting Smollett’s claims, Hollywood rushed to blame President Trump and the right for the attack.

Smollett, who also happens to be a liberal, anti-Trump activist, claimed that two white guys in ski masks beat him up, put a noose around his neck and scoured bleach on him, all the while shouting racial, homophobic slurs and saying “This is MAGA country.” In downtown Chicago, at frigid temperatures, at 2 AM in the morning. The only proof of this encounter thus far is the actor’s word, yet Hollywood came out to blast Trump and his followers on social media:

Activist and director Rob Reiner tweeted that Trump was to blame because he “injected hatred into the American bloodstream:”

The horrific attack on Jussie Smollett has no place in a decent human loving society. Homophobia existed before Trump, but there is no question that since he has injected his hatred into the American bloodstream, we are less decent,less human,& less loving. No intolerance! No DT!

Actor Billy Eichner tweeted that even if there was no proof, he still doesn’t doubt Trump supporters were capable of doing such a heinous act:

Time will tell if Jussie’s attackers shouted MAGA or not but there is no part of me that doubts that Trump and MAGA culture have encouraged and emboldened these types of attacks and that is truly fucking unforgivable.

Grey’s Anatomy star Ellen Pompeo directly blamed Trump followers for the attack, on her Instagram account, which has 5.9 million followers:

“These punks ...these haters ...who are filled with fear and insecurity who continue to spread hate and violence in the name of this administration must be called out at every turn,” she seethed.

Cher, with her ever-coherent ramblings tweeted blame at "NPR, VILLAINY, RACISM, HOMOPHOBIA, PROMOTED BY MOST INFAMOUS CLOWN IN WORLD IS THE POISON THAT KILLS AMERICANS WHITE ONLY IS NOT RIGHT...GOP GOES DOWN WITH SHIP."

Fellow Empire actor Taraji P. Henson seemed to refer to Trump as “the devil” and his supporters, “his minions” in an Instagram post. She wrote, “I tell you one thing HATE WILL NOT WIN!!!! My baby is resilient and love still lives in him. The devil and his minions are very busy right now….”

Yes Viola! Hate filled people are being emboldened and we should take it personally. Special prayers up to Jussie and anyone else who has had to witness hate on this level https://t.co/wv8UFxRVkx

Dozens more celebrities came out blasting America’s “hatred” towards gays and black people, while not name-dropping Trump or conservatives, specifically.

Democrats all came out with similar expressions of horror and disgust as well, some directly pointing fingers at Trump, such as anti-Semitic Democrat Rashida Tlaib, who blamed “the right wing:”

"When one of the most famous black and gay men in America is not safe, the message is clearer than it has ever been." The dangerous lies spewing from the right wing is killing & hurting our people.

Thinking of you @JussieSmollett, and my LGBTQ neighbors.
https://t.co/edtIFWYAX1

You would think the left would learn by now to let the facts come in before passing judgement, after how the media hyped the fake Covington narrative and the Buzzfeed "bombshell," but that doesn't seem to be the case.