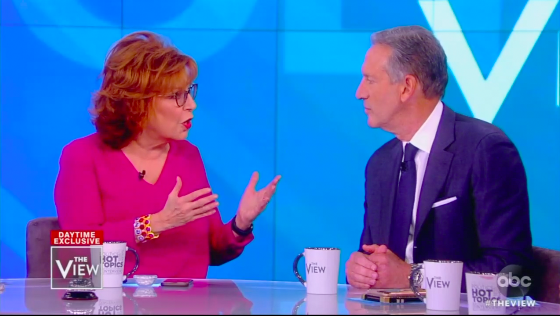 Tuesday on The View, the hosts interviewed potential 2020 independent candidate and former Starbucks CEO Howard Schultz. Despite Schultz’s liberal politics, the notion that he could be more moderate than Democrats running and thus steal votes away from Dems has driven the media to hysterics, including the women at The View.

Unlike the heavy-handed virtue signaling displayed at CNN’s town hall last night with Kamala Harris, the hosts actually pressed Schultz on his potential run and viewpoints, but mainly out of fear of Donald Trump getting re-elected. Whoopi, Joy Behar and Sunny Hostin tried to get the liberal CEO to run as a Democrat instead:


WHOOPI: You’ve been a lifelong Democrat, are you not sure your policies are strong enough?

JOY BEHAR: The main thing, and I said it yesterday, that scares me is that your entry into this race will guarantee Trump another four years, and we cannot have that. You talk about the Democrats not wanting to negotiate, they cannot negotiate with a toddler. If you give him the cookie one day, the next day he wants another cookie. So its not equal on both sides. They had to play tough, the Democrats, with him, otherwise he will run amok. Now your entry into the race pretty much guarantees that a Republican is going to win.

As Schultz defended his legitimacy as a foe to Trump, Behar snarked again, “No one wants to see you run more than him!” to which Meghan McCain agreed.

McCain was equally as angry at Schultz for running but for different reasons, complaining that he was just another billionaire running for president. “You're a glaring example as long as you're a billionaire you can run for anything,” she slammed. She followed up by bashing him for appearing on The View instead of campaigning at the local level.

“No disrespect to you. You just went on Gwyneth Paltrow's podcast. You're here on The View. All politics should start local. Why aren't you in New Hampshire or Iowa right now,” she slammed.

To the end the show, McCain attempted to hit Schultz from the right, for his pro-abortion stance, saying he would never win conservatives over with that viewpoint. Schultz discounted the culture war, saying financial security was more important than abortion:

The way the media has responded to Schultz’s potential run reveals their commitment to the far-left politics the Democrat party has embraced as well as the realization that those beliefs won't play well with moderates and independents.