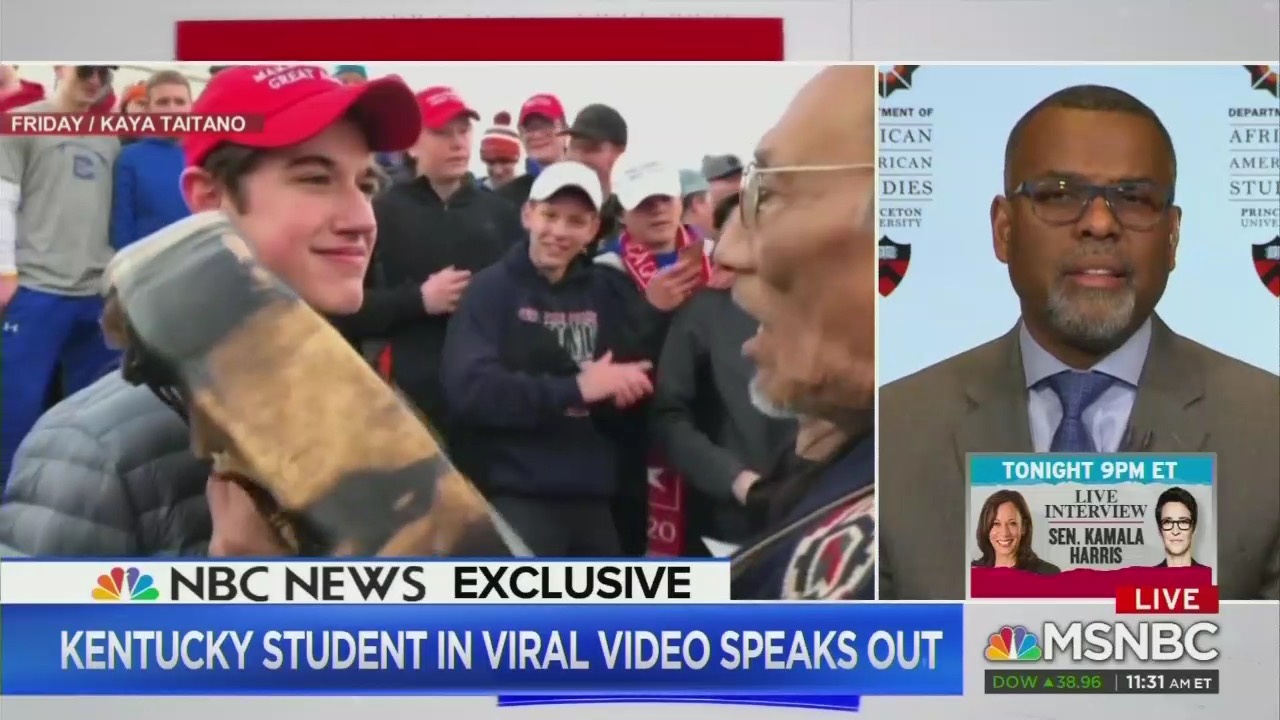 Princeton professor and professional race-baiter for MSNBC Eddie Glaude spoke with host Craig Melvin on MSNBC Live Wednesday morning to bash the Covington kids as symptoms of white privilege. Yes, getting your name, image, school and family smeared all over television and online, while receiving death threats is apparently a symptom of “white privilege,” or at least that’s what Glaude tried to argue. Melvin also claimed that anyone wearing a MAGA hat was asking for trouble.

After the media reluctantly acknowledged that additional videos contradicted many of the horrible claims made about the Covington kids over the weekend, Glaude and Melvin wondered if the kids deserved to be able to defend themselves to the media. Glaude claimed black kids were never given the benefit of the doubt by the media while white kids were always given second chances by the media:

I think more than anything, underneath some of the backlash against hearing the young man is this question, who are allowed the innocence of childhood, right?...Why do we always do this in these sorts of cases, when white boys are involved, and what do we do, how do we react when brown and black kids are involved?

Melvin responded that Glaude’s race-baiting “made a lot of sense,” before slamming Nick Sandmann for not saying “I’m sorry” in his NBC Today show interview Wednesday morning.

Glaude then went on a rant about masculinity that would fit well into a Gillette ad before bashing Sandmann for not taking “responsibility for what happened.” Melvin moved on to ask about the MAGA hats, actually saying that just by wearing one you were “inviting” a “confrontation:”

That hat has become symbolic of a lot of things in this country. To some, it is nearly a hat that dons a political slogan that the president popularized. For others, it has become an invitation for confrontation. Some people referred to the hat as a modern day version of the confederate battle flag. Do we think that the same reaction would have been had on both sides if he weren't wearing that hat?

Glaude invoked radical left-wing actress Alyssa Milano, who called the red hats a modern-day symbol of the KKK. Glaude also smeared the boys by repeating debunked claims that they shouted “build the wall,” as well as a dubious video posted by a liberal activist that shows an unidentified group of boys yelling at her, as the Covington kids:

Probably not. There was a sense in which the hat announced a certain set of political commitments. Alyssa Milano the actress I think described the hat as a modern day white sheet. I think that's how she described it. The hat in some ways for many of us a kind of racial animus...Make America great again is a kind of nostalgic longing for the 1950s...which black people were to stay in their place, where browns were to stay in their place, and white people were to be treated differently and valued according to the color of their skin. Yes, I think if the hats weren't involved, it might not have been as intense. But there were also words. There were a lot of people who said that, you know, build the wall, build the wall, said that was shouted. We saw footage later on of the young men cat calling at young women walking by.