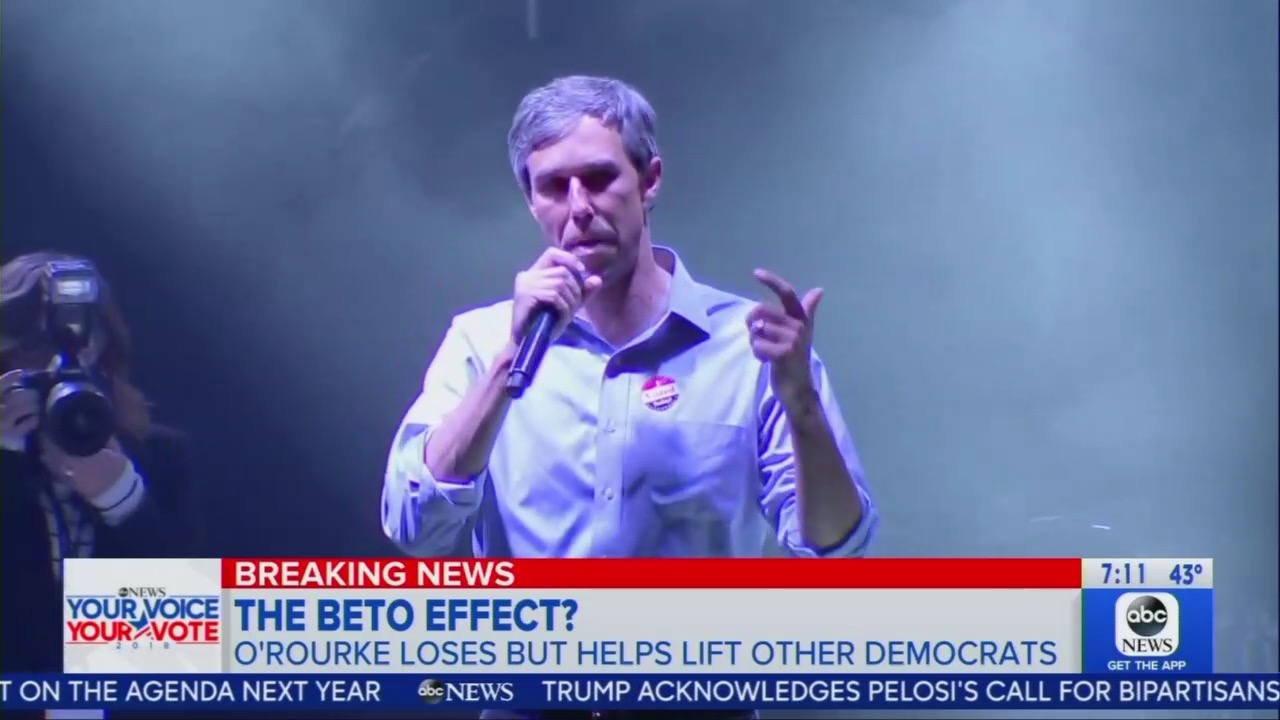 The morning after the midterms, the media was busy celebrating Democrats winning the majority in the House of Representatives. Despite this win, many of the media-hyped Democrats running for office lost their races last night, much to the chagrin of the news media who blamed everything from racism to voter fraud. But over on Good Morning America, ABC tried to spin Ted Cruz’s win over media heartthrob Beto O’Rourke in Texas as a sign of “hope” for 2020.

Conceding that their favorite candidate lost, anchor Robin Roberts still praised the Democrat’s future in politics, saying, “Yes, O'Rourke lost but we’re hearing about the Beto effect still in effect, Paula,” she hyped. “Yeah we sure are,” Faris gushed, clinging to his potential presidential run:

“Texas Democrats were hoping for a victory instead got hope for 2020. This race was a lot tighter than most people expected it to be,” she touted. On the screen it read, “O’Rourke loses but helps lift other Democrats.”

Faris praised O’Rourke for wanting to work with Cruz to stop the “divisiveness in this country,” but noted that maybe he was just “a little too progressive” for Texans:

He said he called Senator Cruz and told him he would work with him any time anywhere over the divisiveness in this country but if you look at Beto's platform, he was out there on the stump campaigning for health care and unity and dreamers, rarely, if ever, was there a mention of the economy. You just wonder if that platform was a little too Progressive for Texas. Cruz certainly thinks so and Republicans here call him a “shiny new penny.”

ABC still was adamant that O’Rourke was going nowhere. Roberts and Faris hyped the possibility he could run for president:

ROBERTS: Okay. 2020, I know we're just getting finished with 2018 but 2020 and you talked to Beto O'Rourke about the possibility of running for president

FARIS: Yes I asked him if there was a scenario where he would run for president in 2020 or beyond and he said, “no, period.” For what it’s worth, Cruz told me he would be surprised if Beto didn't run and as for Cruz who famously ran during his first term, I said “Will you serve your full term?” He said unequivocally he would serve his full term.” A lot to be determined in Texas.

Roberts closed the segment by downplaying the Democrat’s dismissal of a presidential run. “A lot to be determined and I’ve lost count how many people have said no and then ended up in the process,” she said, hopefully.