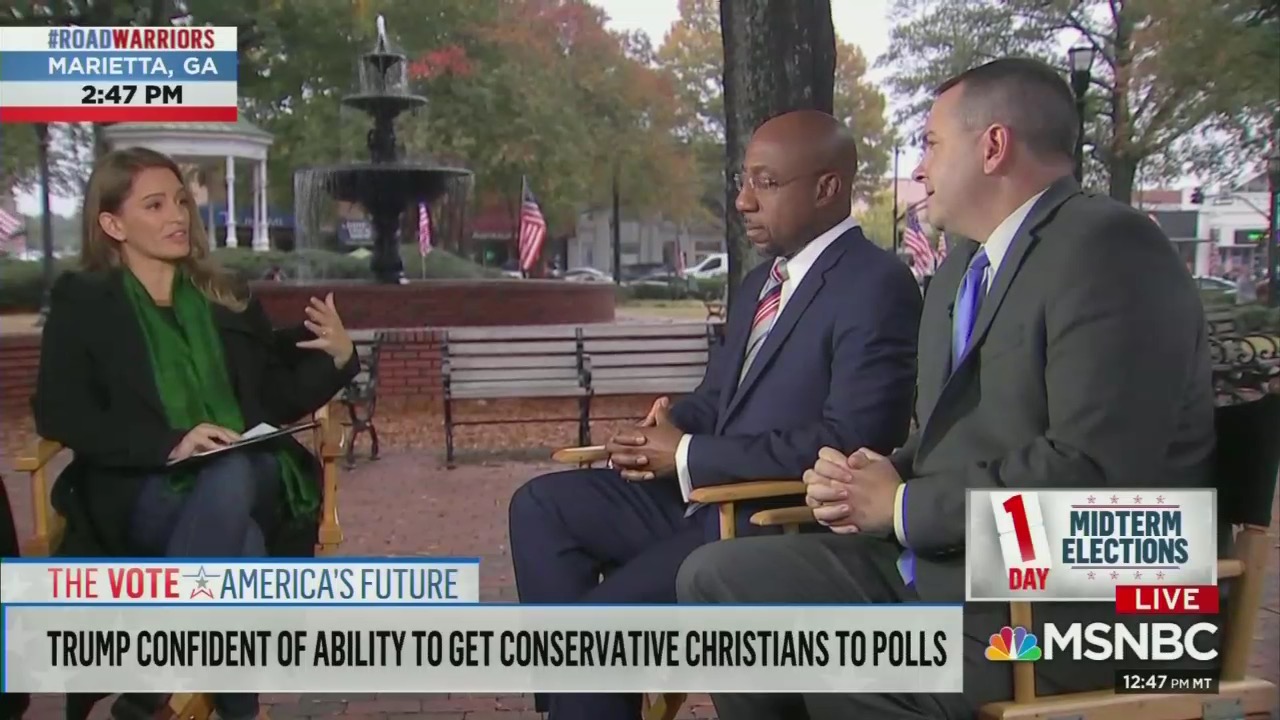 MSNBC anchor Katy Tur sat down with a liberal evangelical pastor and a conservative evangelical activist who supports President Trump on MSNBC Live Monday afternoon to talk about how Trump is doing with evangelical voters these midterms. While Tur let her liberal guest talk at length about how un-Christian Trump is, she berated her conservative guest, and even claimed that abortion was a lesser evil than the former border policy.

Right from the start, Tur made the differences between the two racial, asking conservative guest, Timothy Head, the executive director of the Faith and Freedom Coalition, if “white evangelicals” were still with Trump, like they were in 2016. While Head avoided making a racial distinction, Tur continued the race-baiting, asking her liberal guest, Reverend Raphael Warnock of the Ebenezer Baptist Church, “Reverend are evangelicals a monolith, do they vote the same? Do black evangelicals vote the same?"

Warnock then complained that Trump did nothing for the poor, because apparently tax cuts only benefited the “greedy” as he put it, adding that Trump had made an “assault on health care.” Tur wondered how they had such different political viewpoints being of the same faith. That gave her liberal guest time to self-righteously rant about how white evangelicals supporting Trump were supporting an “un-Christian” immigration policy of not letting a caravan of illegal aliens enter the country, undeterred. That moral lecture inspired Tur to badger her conservative guest on how evangelicals could support President Trump:

What do you say to those out there who say hey listen when I think about evangelical voters, I think about the past, I think about family values, I think about morals. Donald Trump is not somebody who is hued closely to that. He has three marriages. He says whatever he wants on Twitter. He swears all the time. He makes fun of people's appearances. How do you argue that?

As Head started to argue that Trump had made tremendous progress for the pro-life movement, and that was important to Christian voters, Warnock interrupted to argue that illegal aliens' children were “our babies” too:

I don't mean to interrupt but we have innocent children being separated from parents at the border. Those are our babies.

Instead of jumping in to moderate, or even push back asking Warnock how abortion fit in with his faith, Tur egged him on, asking if abortion really was that big an offense, compared to the cruelty of enforcing immigration policies:

I'm not sure you're addressing what the Reverend just said which is if you're talk about being pro-life and protecting fetuses, protecting babies in the womb. What about the babies who are being taken away from their parents at the border. I get this question a lot from folks when they talk about evangelicals. Why was that not as offensive, if not more, than say, something like abortion?