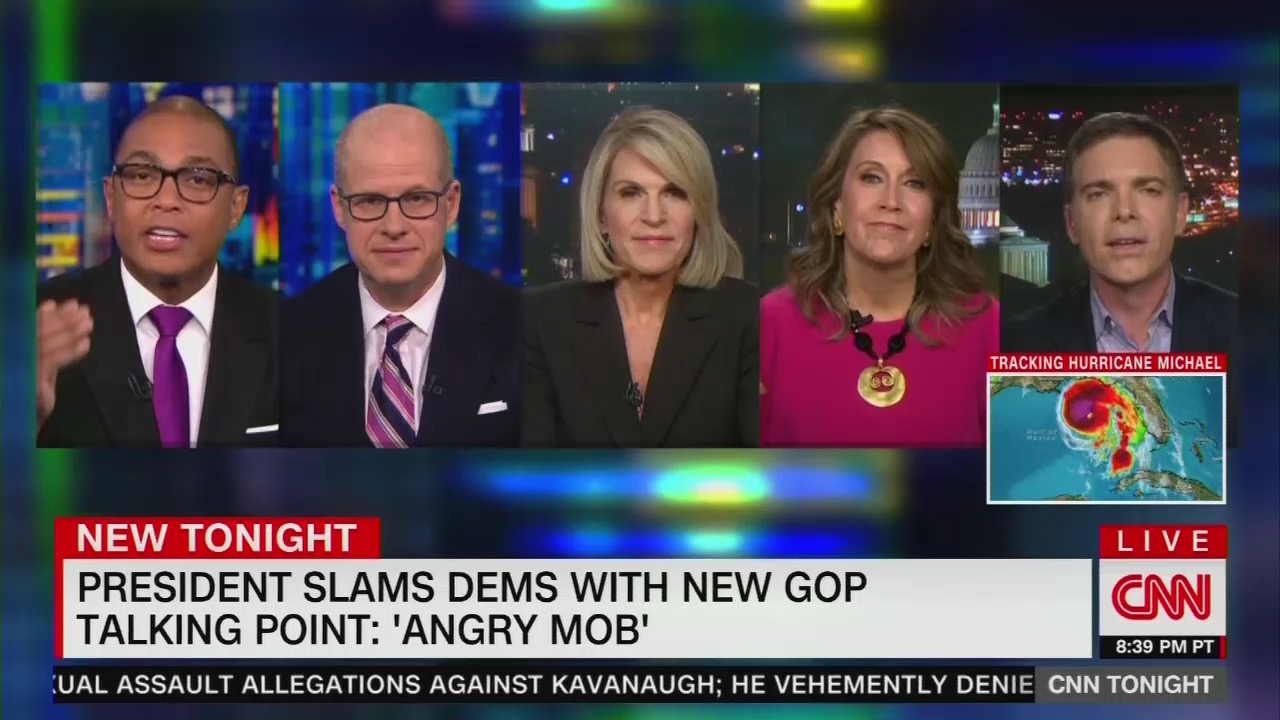 In a lengthy segment on CNN Tonight Tuesday evening, anchor Don Lemon had a panel of both right and left-leaning analysts on to discuss President Trump’s comments condemning the left wing mobs that are and have been harrassing Republicans, particularly after Justice Brett Kavanaugh was confirmed to the Supreme Court.

Lemon grew increasingly frustrated with right-leaning columnist and CNN commentator Matt Lewis of the Daily Beast, after he argued there was a double standard in the media ignoring these leftist mobs, and downplaying them as simply “protesters.”

Also on the panel was Democrat strategist Maria Cardona, faux Republican Max Boot, and Republican strategist Alice Stewart. Playing clips from a Trump rally where he spoke about the importance of voting and not giving power to “angry left wing mobs,” Lemon feigned ignorance, snarking, “Who is he talking about?”

Cardona slammed Trump for dismissing “angry women” protesting Kavanaugh to “Republican men” who treated them with “disdain and denigration.” Lemon agreed, lecturing his next guest, Stewart, to remember that “her party won” so, Trump calling “people who don’t agree” “a mob, that is a bit much,” he protested.

Stewart objected to Lemon’s lame characterization, saying that “chasing Senators out of restaurants” and “banging on the doors of the Supreme Court” is not protesting. Cardona claimed that wasn’t what Trump was talking about.

“That’s exactly what he’s talking about!” Stewart shot back. Lewis cut in to point out the hypocrisy of the Democrats and the media on mob rule:

Imagine, let's turn this around. Hillary Clinton wins. And she names a Supreme Court nominee, Republicans are upset. Imagine if there was a democratic senator and his wife at a restaurant and the alt-right, Richard Spencer's crew comes rolling in yelling at them berating them, trying to shame them. imagine that.

After Lemon objected Lewis changed the hypothetical scenario to Tea Partiers instead.

“Would we be wringing our hands and clutching our pearls and saying ‘We can't call that a mob. Those are protests.’ No, that is mob behavior!” he forcefully argued.

Lemon said he wouldn’t have called the tea party, a “mob”, adding that he defended their right to protest even though they “did hound me.” Lewis argued that they never behaved in the way these left-wing mobs are behaving. But Lemon claimed that politicians should be held to a lesser standard than everyone else in the public sphere.

“[If they had done that to me] I would have said that wrong because I'm not an elected official!” Lemon shot back. He continued:

“Is it mob behavior? No, it's not mob behavior. It's people who are upset and angry with the way the country is going,” he began. As Lewis started to interrupt, a fiery Lemon shouted, “Will you let me finish Matt please before you jump in, Okay?! I’m making a point!”

Lewis objected to Lemon’s diatribe, asking if he was supposed to be the “moderator or the host” or someone arguing a “liberal talking point?”

Lemon finally lost it on the conservative guest as the two went back and forth. The CNN journalist shouted, “Will you let me finish, please!” adding, “Shut up and let me do it!”

After arguing the same point he made earlier, that you could “exercise your constitutional right” to protest however and whenever you wanted, he cut to commercial.

Republican Senator Orrin Hatch schooled Lemon on the facts he keeps misrepresenting on this issue:

Members have been attacked, shot, had home addresses (where their families live) posted online, been accosted during family dinners, and received every kind of death threat.

It’s alarming to hear media minimize at as just "people who are upset."https://t.co/wXrD79KCq1