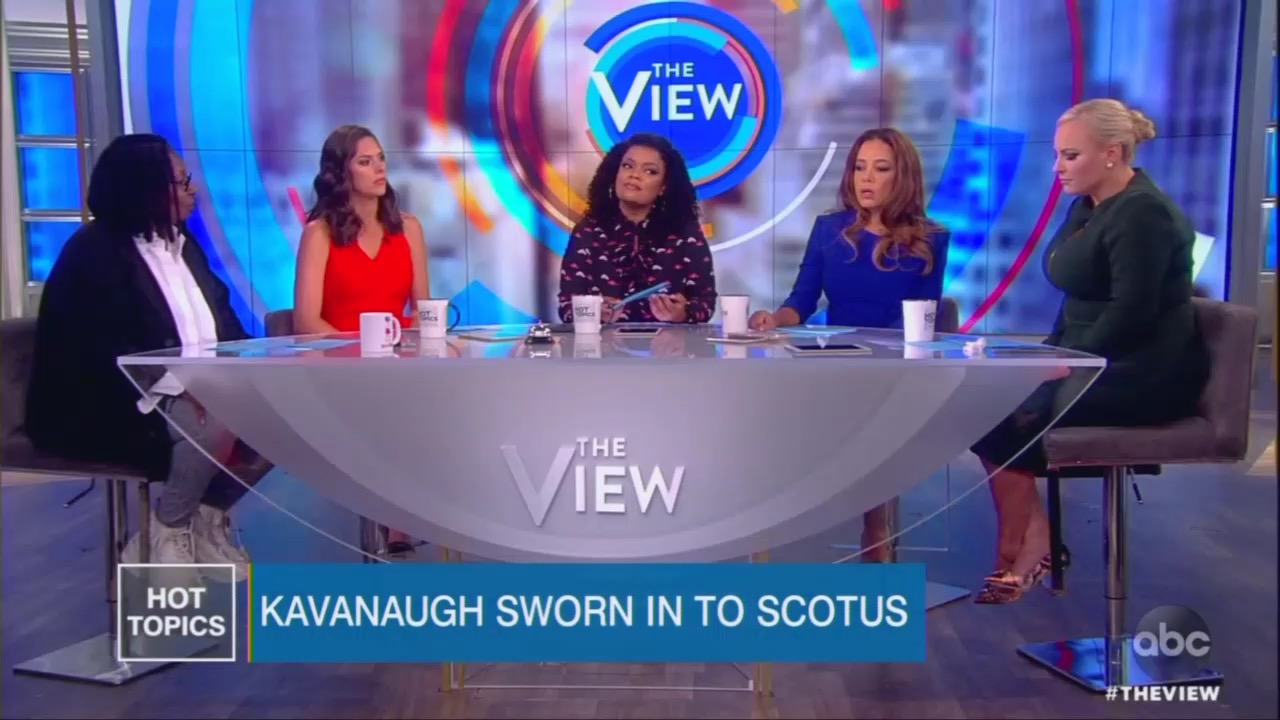 For the second show in a row, the hosts of The View promoted the idea Monday, that newly confirmed Supreme Court Justice Brett Kavanaugh lied and perjured himself before the Senate during his testimony two weeks ago.

Last Friday for co-host Joy Behar’s birthday, MSNBC hosts Ari Melber and Chris Hayes surprised her by appearing on the show to give their own political commentary. Melber took off his “journalist” hat to outrageously claim that Kavanaugh “misled” and “perjured” himself before the committee. None of the hosts pushed back on this baseless smear.

Again, on today’s show, that notion was promoted again but by one of the View’s own hosts for the day.

Frequent guest host and actress Yvette Nicole Brown ranted that Kavanaugh “lied and perjured himself” during his testimony, saving some outrage for Kellyanne Conway’s defense of Kavanaugh:

When he already lied and perjured himself a couple times in that same testimony! The other thing I wanted to talk about was Kellyanne Conway’s tweet, where she says to Brett Kavanaugh, ‘Your refusal to quit amidst the bullying, harassment, insults and lies is a great lesson to our children.’ I actually think what Dr. Ford did was a refusal to quit amidst the lying harassment insults and lies[applause] and Kellyanne Conway came out said she was a sexual assault survivor so are you lying, Kelly? Are you lying?

Last I checked, Conway wasn’t making her allegations against a liberal Supreme Court nominee before the Senate.

Co-host Sunny Hostin echoed the the media’s mantra that “angry women” were going to come out in full force this November to vote Democrats into office:

“I don't think you can underestimate the anger of many women survivors and women in general and I think that anger that lasts sort of -- anger is a feeling that lasts,” she stated. Hostin also slammed moderate Republican Susan Collins for not voting with Democrats, gushing that Christine Blasey Ford’s testimony should’ve outweighed Brett Kavanaugh’s “denials:”

You know, I've heard since this started from hundreds of survivors and just this weekend I heard from someone that said, ‘so, for Susan Collins, her testimony under oath wasn't enough to be believed but his denial under oath was? So what does that say to someone like me’ and she suffered horrific sexual abuse.

Co-host Abby Huntsman, the ever faithful non-opinionated host at the table weighed in by saying that she “wanted” to feel confident in Dr. Ford or Brett Kavanaugh, but she didn’t feel swayed to either side.Whoopi weighed in by saying how “in love” she was with Democrat Senator from North Dakota Heidi Heitkamp who lectured her GOP rival for his comments on the #MeToo movement.

Conservative co-host Meghan McCain, who returned to the show Monday, didn’t have anything to add to the brief discussion on Kavanaugh.