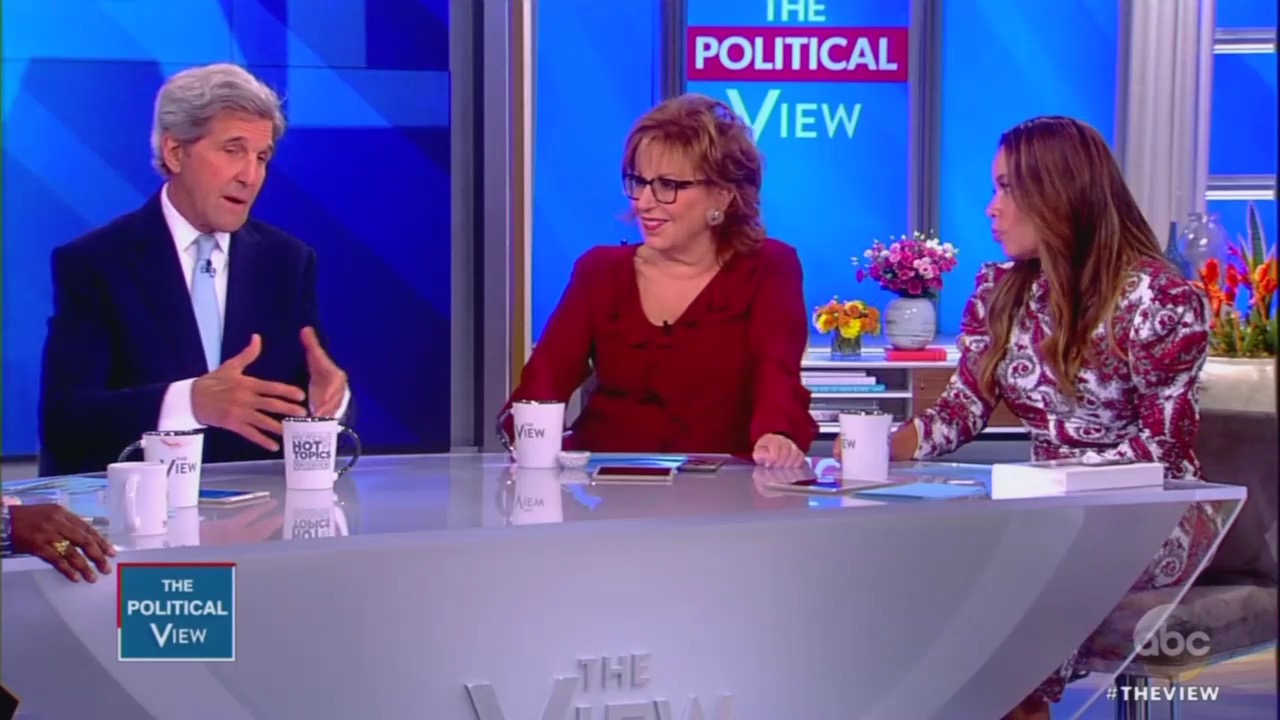 Wednesday on The View, the hosts gave a warm welcome to former Secretary of State under President Obama, John Kerry, giving him the chance to promote his new memoir, while lobbing softballs about the Mueller probe, the Iran Deal and his relationship with John McCain.

New host Abby Huntsman didn’t even try to represent the conservative viewpoint she was hired to offer, eagerly asking Kerry if he was running for President in 2020:

“Are you -- going to run for president? A lot of people think that you should. A lot of people think that you will,” she gushed. A stoic Kerry said he was focused on 2018 and the Midterm elections instead, which earned him raucous applause from the audience and the fellow hosts. Kerry added that the 2016 election was decided “not by the people that voted but by the people that didn't vote,” citing low turnout numbers. Co-host Sunny Hostin gushed in agreement, “Yes, yes!” to that point.

Since McCain was absent from the table, Hostin was stuck with asking Kerry about the Iran Deal, from a conservative perspective--something so unacceptable that even Behar interrupted the question to help out their Democrat guest:

HOSTIN: That was a huge part of your legacy which ended U.S. sanctions in Iran if Iran halted their nuclear program. Part of that deal involved giving billions to a terrorist-supporting regime. People have been very critical of that. What is your answer---

BEHAR: Wasn't it just their money that we gave them back?

Kerry confirmed Behar’s answer, saying, that the money was earning “massive amounts of interest” and burdening the American taxpayer before they gave it back to Iran. Behar snarked, “That fine point is not ever communicated to the American public.”

That gave Kerry an opportunity to tout the deal as the toughest one in history:

“They don't tell the truth. I say this straightforwardly. The Iran nuclear agreement is the most accountable nuclear agreement, the strongest, the most intrusive, that we have anywhere on the planet,” he boasted before going onto absurdly claim that Iran was “still” keeping up with their agreement.

After Huntsman brought up Trump’s criticism of Kerry for trying to “negotiate” with foreign countries on the Iran Deal prior to his administration withdrawing from it. Kerry claimed it was in his Constitutional right to keep talking about it overseas, saying he was doing nothing different than past Secretaries of State:

“Everybody as a former Secretary maintains their right as Americans under the First Amendment to be able to speak to people, to talk to other leaders, to be informed. I didn’t negotiate. In fact, I was supporting what was then American policy,” he answered.

Kerry’s answers were met with approval from the hosts and audience but back in 2015, the View hosts weren’t as enthusiastic about the Iran Deal when it actually happened.