Clearly there’s no vetting process at the New York Times or else they’re just foolish enough to think that no one will look at their new employees’ social media histories. (See update at the bottom of this post.)

The Times just announced yesterday that they hired former Verge tech writer Sarah Jeong for their editorial board. Problem is, the 30-year-old has a very controversial Twitter account with some very nasty and hateful tweets directed at white people. Several Twitter users captured screenshots of the offensively racist rhetoric from Jeong, before she aptly deleted the tweets. H/T Twitchy: 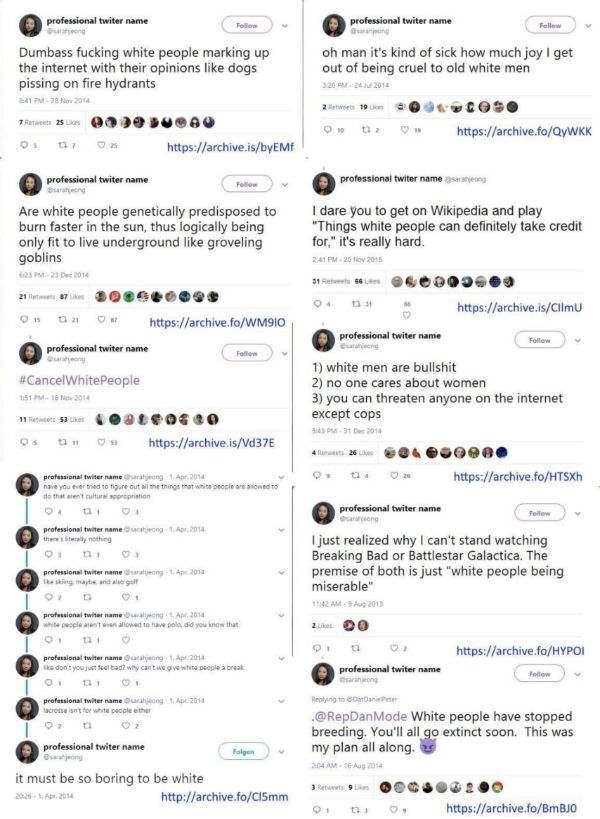 As you can see, this wasn’t just a one off mistake. There are around a dozen tweets and retweets from the millennial where she admits how much she hates white people, writing things like, “Dumbass fucking white people marking up the internet with their opinions like dogs pissing on fire hydrants” and “Oh man, it’s kind of sick how much joy I get out of being cruel to old white men.”

Besides comparing white people to “dogs pissing on fire hydrants,” she also called them “groveling goblins,” and claimed it was her “plan” that white people go “extinct.”

What a gem! With insightful tweets like that it’s no wonder the Times found her a must-have employee.

The Jeong hire comes after the paper got into hot water earlier this year, when racist and homophobic tweets from new opinion writer Quinn Norton resurfaced. She was fired just a few hours later. Who knows if the backlash will force the paper to do the same with Jeong.

UPDATE: 12:30PM EST: The paper responded to the criticism of Jeong by actually defending their decision, laughably claiming that Jeong was only trying to reflect the kind of rhetoric she faced online. Essentially the Times justified her racist tweets below:

Our statement in response to criticism of the hiring of Sarah Jeong. pic.twitter.com/WryIgbaoqg