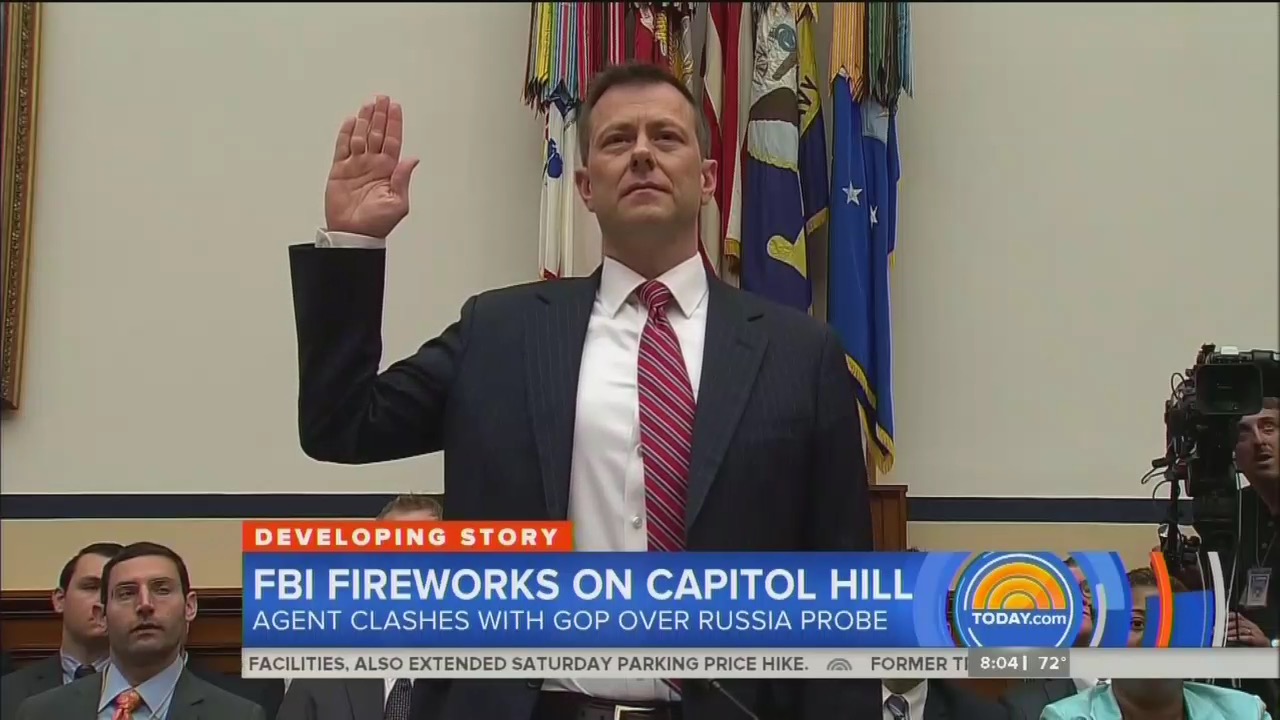 All three networks came to the Democrats’ defense Friday morning after the heated Congressional hearing Thursday where lawmakers questioned anti-Trump FBI agent Peter Strzok about his biased role involved in the Clinton and Russia investigations. ABC, NBC and CBS didn’t hide their contempt for Republicans questioning Strzok, while they touted Democrats, ironically, as the ones were trying to uphold justice. Not only that, while they highlighted one Republican’s over-the-top line of questioning, they flatly ignored Democrats who also went over the line, absurdly calling for Strzok to get a “Purple Heart.”

“Peter Strzok came here to Capitol Hill to defend himself and the FBI. But it devolved into shouting matches between the President’s supporters and those who say they support federal law enforcement,,” Reid opened her report.

Reid noted that Democrats “mocked” the hearing, arguing it was a “distraction from the ongoing special counsel investigation into the president,” before highlighting Rep. Louie Gohmert going after Strzok for his extramarital affair. CBS sought out a soundbite from Republican Rep. Mark Meadows calling that line of questioning “inappropriate.”

What else was inappropriate that CBS didn’t have time for? Democratic Rep. Steve Cohen telling Strzok that he deserved a “Purple Heart” for having to endure these questions. That also happened during the hearing:

"Mr. Strzok, I don't know where to start. If I could give you a Purple Heart, I would. You deserve one,” he gushed to Strzok, before going on to complain Republicans were simply trying to distract from the Mueller investigation.

That distinguished honor is of course awarded to those who are injured or killed in the line of duty. A far cry from one FBI agent having to answer a few tough questions.

NBC’s Today show also characterized Republicans as simply “Trump supporters” and Democrats as the ones trying to uphold the law in their two reports on the hearing. Peter Alexander slammed the hearing as an “ugly free for all” between Republicans and “those defending” the FBI:

Even in this era of deep divisions, this hearing may mark another low. At times, a shouting match between the President's supporters and those defending the agency investigating him. The key witness pummeled but defiant, insisting the FBI's Russia investigation is not a witch hunt and arguing the partisan feud is playing right into Vladimir Putin's hands. On Capitol Hill, an ugly free for all. FBI agent Peter Strzok fending off blistering house Republican attacks accusing him of bias against Donald Trump.

NBC and CBS also came to Strzok’s defense, playing a clip of the FBI agent explaining his biased texts against the president came after he was outraged over Trump’s comments about Khzir Khan’s son.

Again, NBC touted the Democrats’ attack line against the GOP:

PETER ALEXANDER: Democrats insisting the GOP is trying to provide political cover to President Trump as the special counsel's Russia investigation plows ahead.

REP. HAKEEM JEFFRIES: They need to identify a villain. Mr. Strzok, tag, you're it.

Alexander ended his report, snidely slamming Republicans as grandstanding to get footage for campaigns back home.

“This was perhaps at best a chance for some of those lawmakers to, you know, sort of deliver a soundbite, score political points. It does make for a pretty good campaign video back in their home districts, right?” he said skeptically. The NBC reporter added that this hearing really made no difference anyway:

“It really doesn't change much in the big picture. The Justice Department's Inspector General already found no evidence that Strzok's personal views affected the outcome of the Clinton email case,” he claimed.

“While the president is overseas, his supporters defended him at a chaotic hearing on Capitol Hill,” Geist hyped.

“An FBI agent accused of anti-Trump bias against angry Republican lawmakers,” Strahan set the scene. Chief Justice Correspondent Pierre Thomas then touted Strzok “fighting back” against “personal” attacks from Rep. Louie Gohmert over his extramarital affair. Playing the clip, Thomas touted Democrats’ outrage over that line of questioning as an attempt to protect Robert Mueller’s investigation:

“Democrats repeatedly pushed back accusing Republicans of trying to undermine Special Counsel Robert Mueller's investigation,” Thomas hyped, playing a soundbite of Rep. Hakeem Jeffries calling the hearing a “kangaroo court.” He continued to play defense for the Democrats, and slammed the hearing as “Partisan as you can get” to end his report:

THOMAS: And Democrats claim if Strzok really wanted to hurt Trump’s chances to become president he would have leaked the FBI fact they were investigating Russian meddling and ties to the Trump campaign. He never did. That hearing that was about as partisan as you can get and today, House Republicans are expected to bring Strzok’s texting partner Lisa Page to Capitol Hill for a grilling behind closed doors.

There was not even one mention of the offensive “Purple Heart” comment from any of the three networks this morning.