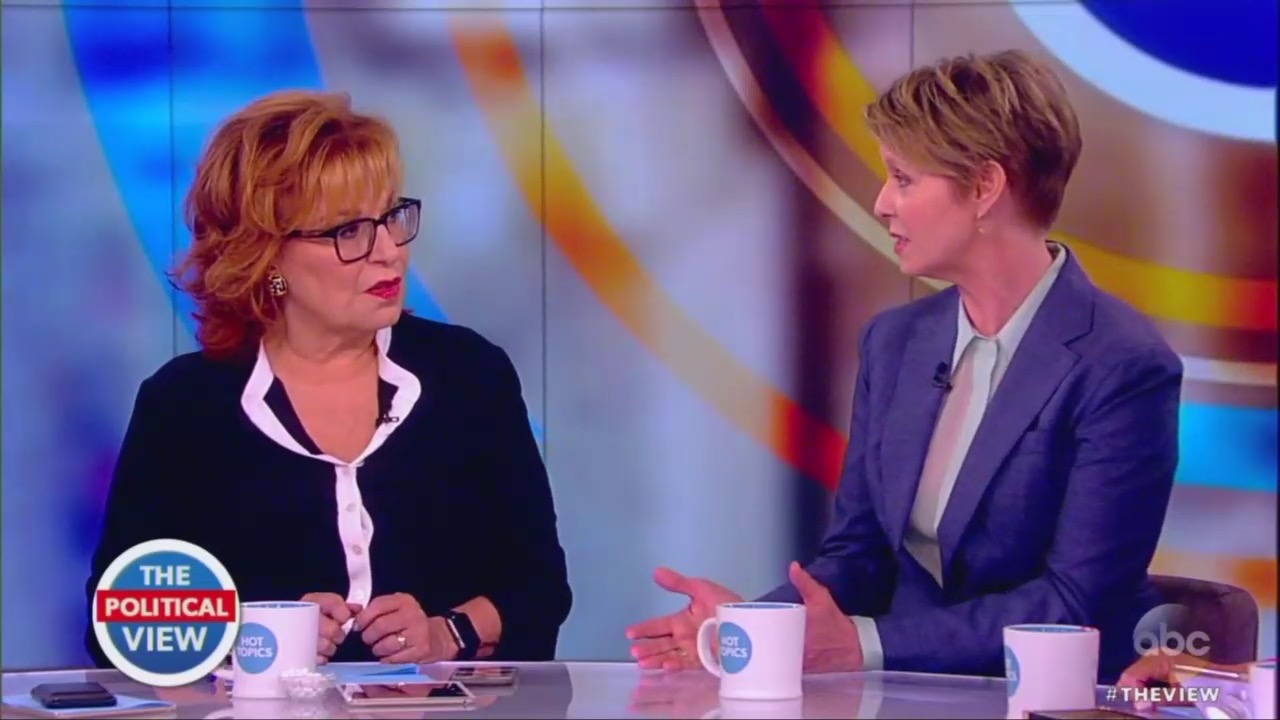 On Thursday’s The View, the hosts talked with Sex and the City actress Cynthia Nixon, who is challenging Andrew Cuomo for his seat in New York’s gubernatorial race. The radical activist only got softball questions from the friendly hosts, despite saying some pretty controversial things at the table.

First, the hosts began the show by rehashing the media’s favorite topic for the past two weeks. After President Trump signed an executive order last night to stop children being separated from their parents, the liberal ladies of the View couldn’t be happy about that either. Afterwards they brought on Nixon for a friendly interview, inviting her to bash the situation as Trump’s “Vietnam.”

Hosts Joy Behar and Whoopi Goldberg first shared some liberal platitudes about immigration with their audience that they somehow found meaningful:

“It’s interesting--I was looking something up--75% of Americans think immigration is good for the nation,” Behar noted. “We believe its good for us, it replenishes,” she remarked as the audience clapped. “I don’t know who he’s talking to!’ she shrugged, referring to Trump’s comments about securing the border at a rally last night to his supporters.

“People may feel its good for the nation because, you know, a lot of us come from immigrants,” Whoopi added, as the audience clapped again. It seems the View hosts and audience members were too dense to realize the distinction between legal and illegal immigrants.

Afterwards, the panel welcomed actress Cynthia Nixon to the table and Behar immediately asked her to “weigh in” on Trump’s “latest debacle.” The liberal Democrat said she was only glad he signed it so the immigrant children were “protected" from him, but wished America could be protected from him as well:

NIXON: Yes, I would. It's devastating, the images from the border and I have to say the recordings of children begging for their parents, I'm -- I guess I'm glad he has signed this executive order against himself protecting them from him. I with wish he would sign some more executive orders protecting all of us from him. [ Cheers and applause ]

That kind of answer was just up Behar’s alley, so she kept pressing Nixon to bash Trump some more. She implied that cameras weren’t allowed in the detention centers because there was something sinister going on. Nixon played right into the fearmongering, claiming this was Trump’s “Vietnam.”

BEHAR: We didn't hit on this, I don't think, today. Why do you think they won't let reporters and congressmen in for two weeks to see what's going on in those places that they've been keeping?

NIXON: Well, I think it's exactly the same as how he didn't want to show footage of Vietnam, because it turns public opinion so much. When you show people what's really happening and the brutality and the injustice of what's happening, people -- it's very hard to defend this kind of a policy.

Nixon bashed the agency responsible for enforcing legal immigration in the country, and said she would get rid of it, if she were in power. The actress also wailed about “protecting” “our” illegal immigrants, and offering them privileges like drivers' licenses:

NIXON: I think we need to abolish I.C.E. That seems really clear. [ Applause ]

BEHAR: What would you replace it with?

NIXON: We don't need to replace -- you know, I.C.E. Is relatively new. It came in after September 11th. We've been handling immigration and customs for a long time here. We don't need I.C.E. They have strayed so far from the interests of the American people and the interests of humanity. We need to abolish it.

But in New York state and across the country there are things that we can be doing on the ground to protect our undocumented people. In New York state we need to be offering access to drivers licenses to undocumented people which is something that our governor is not doing now and it's something that I will do immediately upon entering office because when an undocumented person who cannot get a Dr's license gets stopped in a routine traffic violation, this is the number one way that I.C.E. Is finding people and picking them up. If we really want to protect people on the ground, this is a concrete thing we can do to fight the Trump agenda, not just rhetorically but with policy if we're really interested in protecting people. [ Applause ]

Even though Nixon is running for political office, no hosts at The View challenged her on her radical views and propositions. Meghan McCain lamely just stated she “disagreed” with what Nixon said, before asking her how she was going to fix NYC’s subway system.