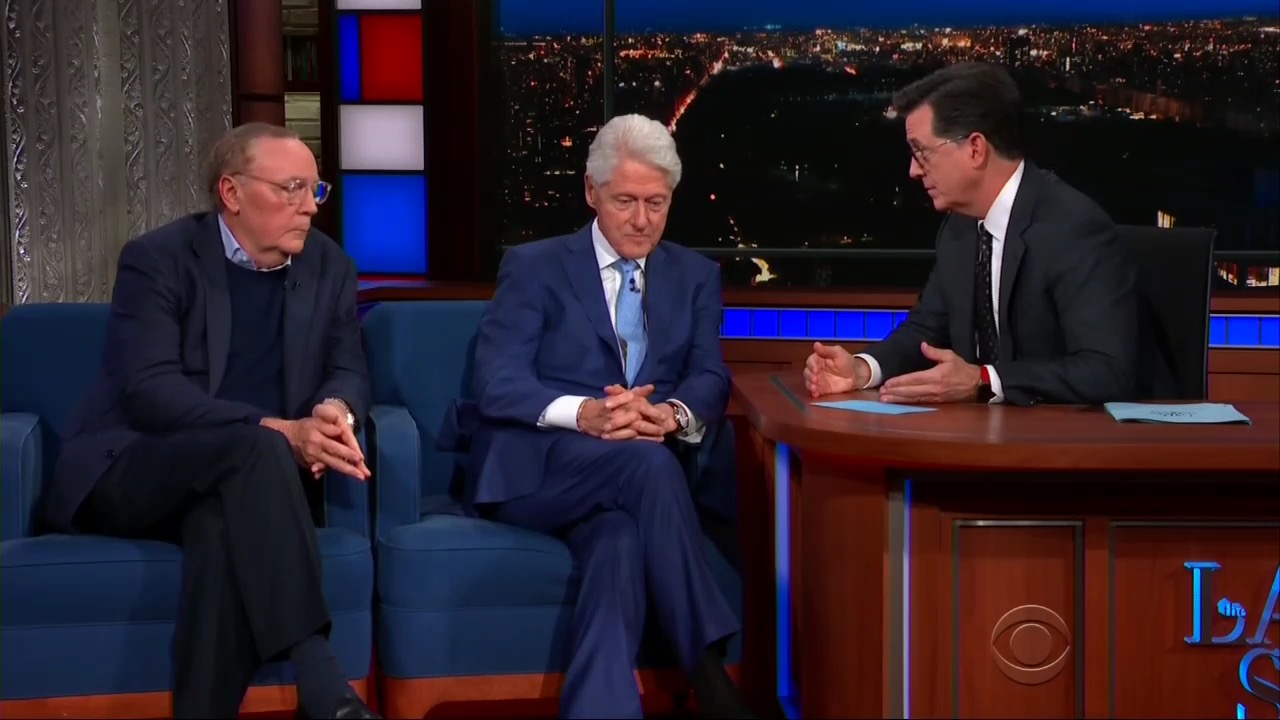 Typically when a politician doesn’t give the socially acceptable answer on a hot button issue such as the #MeToo movement, the media’s rage for the faux pas spurs headlines and conversations that last for weeks on cable news and print. That is, unless it’s a beloved Democrat politician. For political royalty such as the Clintons, the media always saves room for yet another chance to fix whatever politically incorrect slip up they made.

Radically anti-Trump talk show host Stephen Colbert gave former President Bill Clinton just that chance on his Late Show June 5, after the former president received backlash for not being sympathetic to questions from an NBC reporter about his role in the #MeToo movement, earlier this week.

Clinton appeared on the CBS show late Tuesday evening with author James Patterson, promoting their new fictional book entitled, The President is Missing. Host Stephen Colbert immediately asked about the backlash Clinton received for his “tone-deaf” response to NBC’s Craig Melvin on the Today show Monday, when he became angry when asked if he ever apologized to Monica Lewinsky, and how he would have responded differently to the allegations of sexual assault against him, if he was president today.

But the liberal host started out by schmoozing Clinton and giving him the chance to fix his mistake.

“I noticed you didn't enjoy the entire interview. I want you to enjoy this one,” he said sympathetically. “My question is, would you like a do-over on that answer? Do you-- do you understand why some people thought that was a tone-deaf response?” Colbert offered.

“It seemed tone deaf to me because you seemed offended to be asked about this thing when, in all due respect, sir, your behavior was the most famous example of a power man sexually misbehaving in the workplace of my lifetime,” he pointed out, adding that Clinton shouldn’t be “surprised” for being asked the question.

Again, Clinton claimed that the NBC reporter had it wrong, that he had apologized already and been asked these questions before in the context of the #MeToo movement, and that was why he was irritated. Colbert offered no further pushback to Clinton’s claims of being taken out of context.

The Late Show with Stephen Colbert

STEPHEN COLBERT: Now, you guys have been on the book tour-- how long have you been doing the book tour so far?

COLBERT: Second day. Well, it's been an eventful two days so far. I noticed-- I watch you on "The Today" Show yesterday morning. I noticed you didn't enjoy the entire interview. I want you to enjoy this one. But I do want to ask you something which is, when I got home last night, on the CNN-- they had a lower-third banner that said something about "William Clinton's tone-deaf response to the question from "The Today Show.” My question is, would you like a

do-over on that answer? Do you-- do you understand why some people thought that was a tone-deaf response?

COLBERT: ...To his questions about the MeToo movement and how you might reflect on your behavior 20 years ago, and how that reflection may chane based on what you've learned through the MeToo, movement.

CLINTON: You know, when I saw the interview, I thought that because they had, you know, to still it, and it looked like I was saying I didn't apologize and I had no intention to. And I was mad at me.

CLINTON: I did. And they showed a film clip finally. But what-- here's what I want to say. It wasn't my finest hour, but the important thing is, that was a very painful thing that happened 20 years ago. And I apologized to my family, to Monica Lewinsky and her family, to the American people. I meant it then. I meant it now. I've had to live with the consequences every day since. And I still believe this MeToo, movement is long overdue, necessary, and should be supported. And we should all-- ( cheers and applause ) And I'd like to think that we're all getting better as we go along.

PATTERSON: Here's the other thing. I've spent a year now with President Clinton. And I went in liking him. But in that year, I found he's just a wonderful, wonderful, wonderful human being. And he spent-- he spent his whole life trying to do good things for this country. And since he's been out of the presidency with the foundation, he's done incredible things for all-- all around the world.

COLBERT: If I could-- I would think some of the reason why people saw that interview and thought that it was tone deaf-- or whatever word they wanted to use-- is that you seemed surprised that that question would come up, that somehow this had all been adjudicated in the past, and there's no reason to talk about it again.

When it seems like the spirit of the MeToo, movement it doesn't matter how long ago it examples of men who were not held accountable for their behavior-- especially men in power with younger women or people who worked for them-- is worthy of being re-adjudicated or adjudicated for the first time, no matter how long ago it happened. It seemed tone deaf to me because you seemed offended to be asked about this thing when, in all due respect, sir, your behavior was the most famous example of a power man sexually misbehaving in the workplace of my lifetime. So it doesn't seem surprising that the question was asked. Why were you surprised?

CLINTON: No, the question had been asked.

CLINTON: No other people in this context.

COLBERT: In the MeToo context.

CLINTON: And I didn't mind at all. But I didn't like this one because it started with an

assertion that basically I had never apologized as if I had never tried to come to grips with it, and as if there had been no attempt to hold me accountable, which anybody who lived through that and knew the facts knew it wasn't so.

Nonetheless, I realized, hey, there are a lot of people that don't have any memory of that, and all they saw was me mad, and I seemed to be tone deaf, to put it mildly. So last night when I was at my event-- we did an event in Harlem with Walter Mosley-- I asked to say something about it, because I think it's important. People need to know I apologized. I meant it then. I mean it now. I've lived with the consequences. And I still support MeToo. And I think we all need to keep trying to be doing better. And I-- I would never dispute that.

COLBERT: "The New York Times" reported that the Democrats are not reaching out to you in 2018 to run because of the taint of your past experience with Monica Lewinsky in the light of the MeToo movement. Is that true? And are you frustrated by it?

CLINTON: If it is, I don't know, because normally I don't do anything in primaries. I try to stay out of primaries because I'd be grateful to stay out of the primaries. But, look, I think it's amazing how the question is asked. I've been out of the White House for 18 years. I've had --

COLBERT:: But you're a big gun. I mean, they send you out there like the cavalry at times.

CLINTON: It is but I'll just see. I don't know. A lot of people have called and asked if I would do something when I can. But on the other hand, when I was a governor, I never had anybody come in for me. So-- and never wanted it. So everything's different now. And we'll just see what happens. I just want them-- what I want to say is these midterm elections are important, and the only people that really matter is not me, it's you.