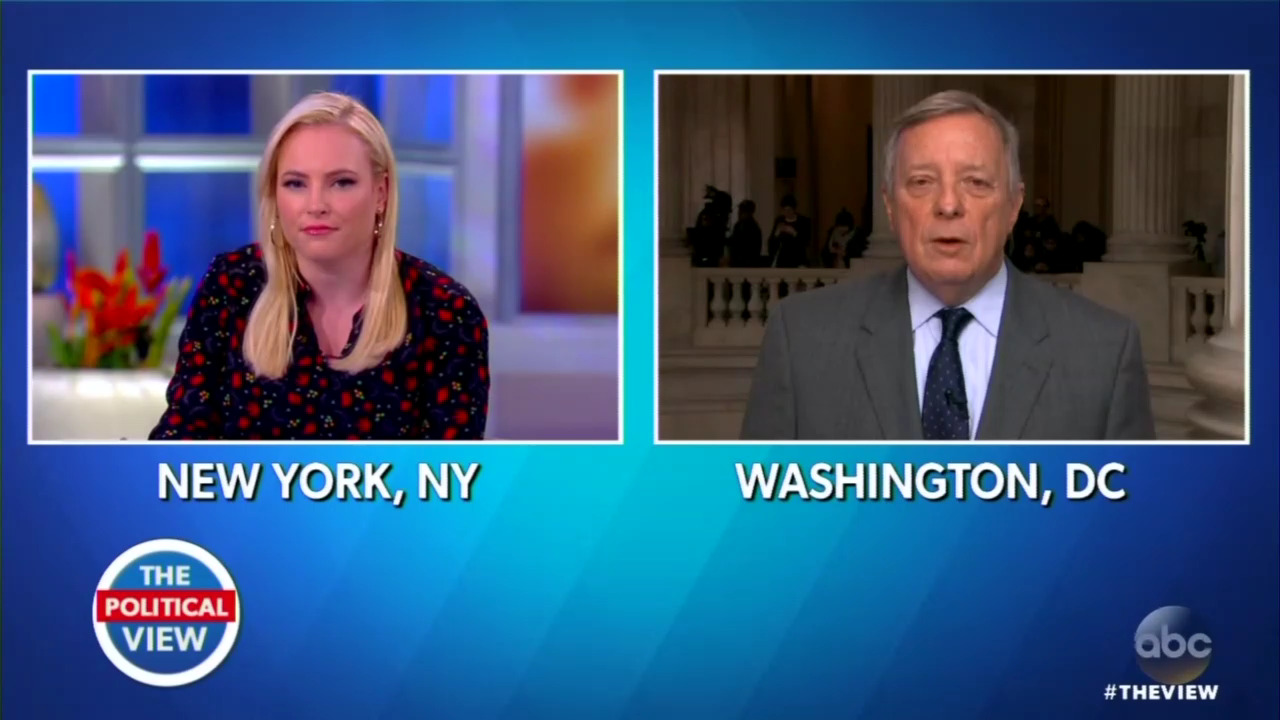 After doubting the truthfulness of the White House doctor, who gave President Trump a clean bill of health yesterday, the hosts at The View skyped in Democrat Senator Dick Durbin (Ill.) on their Janauary 17 show to ask him about Trump’s infamous “s***hole” comment and whether or not the DACA deal was going to happen.

Though the questions were mostly friendly from the liberal panel, co-host Meghan McCain didn’t let Durbin off the hook, grilling him on his choice to leak the comment from a private meeting.

But the interview began with a warm welcome, where Whoopi characterized Durbin as truthful, unlike the Republicans who were in the room.

“A lot of attendees of last week’s immigration meeting are changing their stories, but not Senator Dick Durbin, who said from the beginning that you-know-who launched into a racist rant,” Whoopi gushed to audience applause.

Behind Durbin, loud singing could be heard in the hall, which Whoopi explained was Jewish rabbis and leaders marching to “defend DREAMERS and demand a clean DACA bill be passed.”

Among the softball questions, Behar tried to get Durbin to bash the Republicans who were in the same meeting and denied Durbin’s account of what the president said. “So basically they’re calling you a liar, Senator. Because Cotton said, the difference is, ‘I’m right.’ They’re calling you a liar,” Behar fumed. “How do you expect to have a bipartisan deal when one Senator in the United States Congress is calling another one a liar?” she asked, irritated.

“I stand by my words,” Durbin responded, adding, “My colleagues are wrong and they know they’re wrong.”

"So they’re liars?” she asked.

“I’m not going to use that word,” Durbin waffled.

When it finally came around to McCain, she picked up from where her liberal counterpart left off, instead, defending Sen. Cotton, and putting Durbin on the spot, calling him out for his history of lying about what’s been said in private White House meetings.

“Senator Durbin, this is Meghan McCain. You have a history of misrepresenting statements from private White House meetings and some say you have actually done more harm than good to the DACA deal by revealing what Trump said in his private meeting. Do you think that's true?” she grilled.

McCain was referring to a private congressional meeting with President Obama in 2013, where Durbin claimed a GOP leader said something defamatory to the President’s face, a claim that was later completely debunked by the Obama administration itself.

But Durbin dodged McCain’s question, instead appealing to the loud voices behind him.

“I can tell you what you hear behind me are the voices of democracy, demonstrators who are on Capitol Hill willing to be arrested in a non-violent way for the D.R.E.A.M. Act,” he gushed. Durbin praised the liberal protesters, saying they were the “strength” behind the movement, as if they somehow had the ability to pass votes in Congress.

McCain rightly called him out for the dodge.

“That’s with Democrats,” she jumped in. “You’re trying to get support with Republicans as well,” she noted.

“There's a lot more support with Democrats than there are Republicans on DACA which is why Democrats are trying to speak with President Trump and I think that's the argument, you’ve possibly done more harm than good with Republicans,” she argued.

Durbin pulled out the Democrat line this week, that the American people were on the Democrats’ side on this issue, adding insult to injury by pointing out that Meghan McCain’s father was on “his side”:

Honestly, you're going to see before the end of the day more Republicans stepping forward and saying they don't agree with President Trump's views on immigration. I don't believe those views represent American. I certainly don't believe they represent the views of majority of Republicans. Certainly your father was working long and hard with me and others for a comprehensive immigration reform bill. I know where his heart is and it isn't with the expressions given to us by President Trump.

“Yes and with all due respect, I know where the heart of people like Tom Cotton is,” McCain snipped back.

“I don't think we're ever going to win him over,” Durbin responded, before fellow host Sunny Hostin took over.