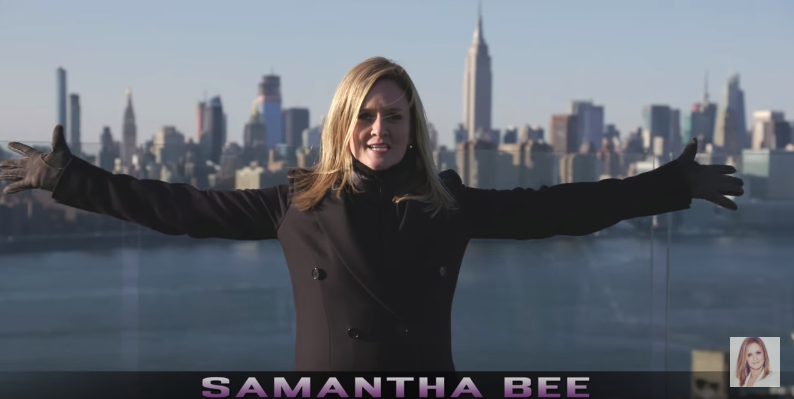 The anti-Trump comedian revealed on her Youtube channel that on January 24, her show would premiere what she’s calling “The Apology Race.”

In case it needs to be said, of course Bee meant she’s apologizing to the world for our president. The fake show’s graphic plays off the reality show The Amazing Race, with similar font and a globe, with some added Trump hair and Twitter birds.

“For the next two weeks, my correspondents will travel the globe to apologize for every garbage thing Donald Trump does. His poor impulse control might force us to go apologize to Korea, the entire Muslim world, or some rando,” Bee explained in the announcement video.

“Let’s meet our contestants!” she gushed, before introducing her “contestants” ie: correspondents

Bee ended the introductions with her “ever patient” black correspondent, Ashley Nicole Black, who responded, “Wait, you want me to apologize to America? Man this is some white bullshit. Every damn week,” she grumbled.

Under the video, The Full Frontal team gives more details to what the “Apology Race” entails:

You know that feeling you get every day, multiple times a day when you check Twitter or turn on the television or read anything? The one of deep embarrassment that lives in the pit below the pit of your stomach? We feel it too so we are picking up the mantle of apologizing to the world on behalf of America. Today we're announcing the official start of the FULL FRONTAL APOLOGY RACE: a two-week romp around the globe to try to make amends for any deeply embarrassing thing our President manages to get his hands on in-between TV time.

They encourage viewers to send in tips of people and places to visit to apologize to with, using the hashtag,#ApologyRace and are posting short video tweets about who they are apologizing to on Twitter. Who’s getting an apology this week? Who else but Dreamers?

Maybe Bee got this bright idea from MSNBC’s Mika Brzezinski, who bragged about how “embarrassed” her friends were when traveling to Europe, having to disclose they were Americans.