CNN's Cuomo: ‘If True’ ‘Bothers Me,’ ‘Their Accusation Is Proof, Right?’ 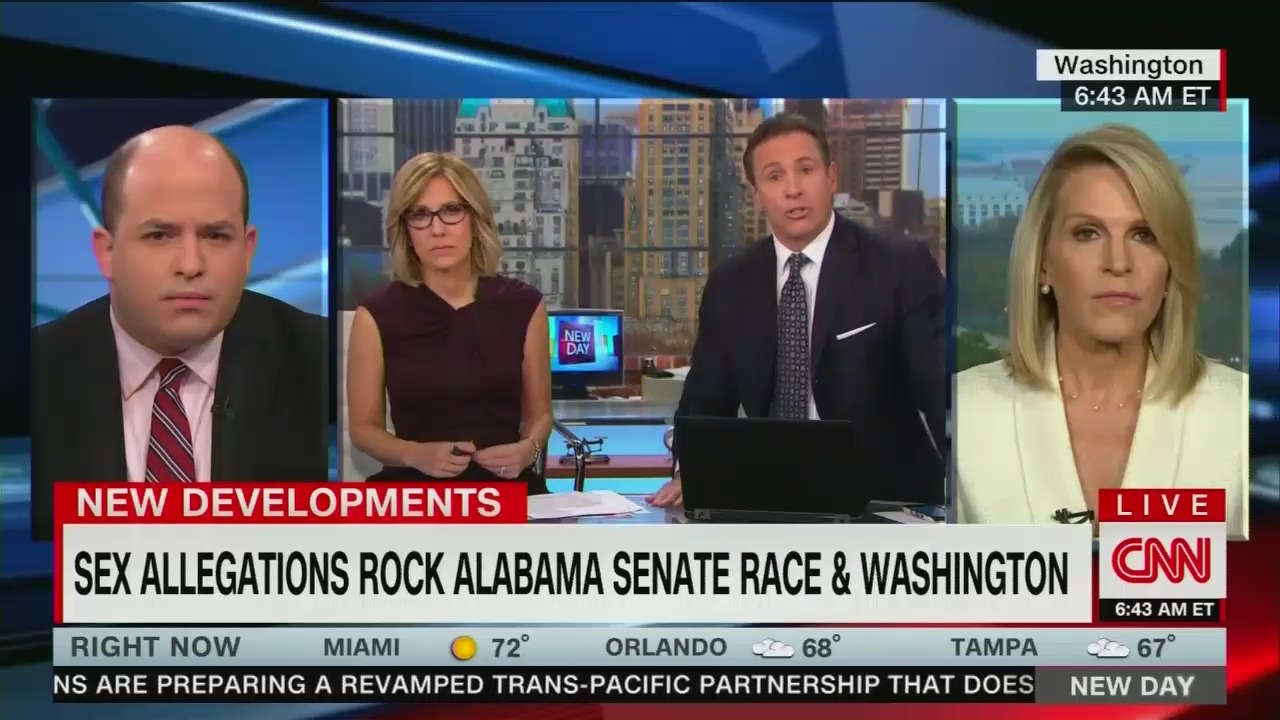 Friday morning, the networks and cable news were rightly aghast at the allegations that were published yesterday afternoon against Alabama Republican senatorial candidate Roy Moore, that he had molested a 14-year-old girl decades ago. Though Moore fervently denied this claim, the media seized upon the story without a hint of reservation, automatically condemning anyone on the right who took the charge seriously but still urged caution until more is known.

For taking that stance, conservative CNN commentator Alice Stewart was attacked by New Day anchor Chris Cuomo, who roundly accused her of essentially blaming the victim and being political, on Friday's show.

CNN’s senior media correspondent and host Brian Stelter began the discussion by lamenting how it is “the right wing media defenders” “can sleep at night”:

Some of these right wing media defenders, I don't know how they can possibly sleep at night. I wonder if they will look back years from now and regret some of the things they're saying, some of the reactions to this story.

CNN then played two soundbites, one of Ann Coulter saying you couldn’t help but wonder about the timing of these allegations coming out, and Geraldo Rivera pointing out that liberals didn’t believe “Paula Jones, and all the rest” with Bill Clinton.

Stelter accused the Fox news commentators of not reading the original Washington Post story which broke the news, and snarked, “they would rather talk about the media than the alleged molestation.” He went on to say the Post story was well-sourced and corroborated.

That’s when Cuomo lamented that anyone would suggest that this story was not over and done with already.

“That’s why the ‘if true’ thing bothers me, because an allegation is a suggestion without proof. Their word, their accusation is proof, right?” Cuomo proposed.

His co-host Alisyn Camerota pushed back.

“Well, I mean, it's not proof, right? Proof is evidence,” she offered.

But Cuomo insisted that an allegation was synonymous to proof of guilt.

Camerota then brought Alice Stewart, CNN analyst and former communications director for Ted Cruz’s campaign, into the conversation, asking her what Moore’s spokesperson had to say about these allegations. Stewart said they were taking the claims seriously and treating them sensitively, but they also strongly denied them.

She went on to deny that these accusations could be compared to President Trump’s Access Hollywood tape, since that was obviously caught on video and as of yet, there was no evidence in Moore’s case. At the same time, she agreed the allegations were “very disturbing.” Stewart reminded the CNN panel that it was up to Alabama voters to decide if they still wanted Moore to be their senator, with these reports made public.

Stelter agreed, saying that was “the point” of reporting the allegations in The Post. Camerota then asked if Moore was truly treating this with “sensitivity,” to which Stewart insisted they were, but this was ultimately the people of Alabama’s decision.

That’s when Cuomo turned on Stewart, insisting she would be arguing Moore was guilty if he was a Democrat and that she was being “political” by not joining in their witch hunt:

Alice, if a Democratic candidate had a story that came out today that we found, with a 14-year-old who came forward, just like the Roy Moore story. She said, “Now that you got me” and told this story, would you feel the same way about it? That boy, you know, this democratic candidate, let's give him every the benefit of the doubt and see if there is any other proof other than this woman reluctantly coming forward and saying when I was 14 he touched me here, he touched me there and I asked him to take me home. I wanted it to end.

But Stewart insisted she was not being political. “I'm taking politics out of this,” she responded.

“I don't know how you can. Because every comment that’s made by people on the right, is defending, and putting in context of political utility,” Cuomo accused.

‘The ‘Well, let's see if it's true.’ The ‘Boy, the timing is suspicious.’ These are not things you say when you are being sensitive to women in the case. They just are not,” he lectured.

“Look, I'm taking politics out of it. It doesn’t matter to me if he's Republican, Democrat, or Independent. These are fresh allegations, fresh charges. And here’s a man who has run for office four times. He has been in the national spotlight for decades, and now all of a sudden these charges come--” she began to say.

“Because women don't want to talk about this because it's scary,” Cuomo continued badgering Stewart, because Cuomo knows more about being a woman than Stewart does, apparently.

“And he's up for a bigger job now,” Brian Stelter piped up.

“You get condemned. Just like Alisyn had all of these women talk about in the townhall last night and we’re seeing it play out in real time. That it’s being seen as a media trick. ‘We have to vet the claims. You can't just believe the women.’” Cuomo continued his tirade.

Camerota jumped into add to the dogpile on Stewart, pointing out Roy Moore’s tweet claiming these accusations were because of his faith:

And Roy Moore himself tweeted this. ‘The forces of evil will lie, cheat, and steal, even inflict physical harm if they believe it will silence and shut up Christian conservatives like you and me.’ That doesn't sound like sensitivity to the accusers.

Stewart agreed that tweet wasn’t very sensitive, but at same time, his camp was pushing back hard against the accusations, which they say were false.

Possibly trying to outwit Chris Cuomo for the stupidest analysis award, Stelter then claimed that the charges must be true because Moore “married a much younger woman:”

And President Trump, by not backing down when the tape came out it benefited President Trump. Some of the liberal Hollywood celebrities have apologized for various wrongdoing. It has sank their careers. I think Roy Moore is looking at that and noticing that. But to call this fake news. For goodness sakes, he married a much younger woman. There’s a lot in this story, it is a very detailed story. I hope people are trying to rip the story apart actually read it first.

Like a broken record, Cuomo ended the interview by calling Stewart to take politics out of her analysis by imagining if Moore was a Democrat:

Which is hilarious, because as we know, if Moore was a democrat, the media would’ve squashed the story or tried to cast suspicion on the women who came forward, much like they did with Bill Clinton’s accusers in the 1990s.