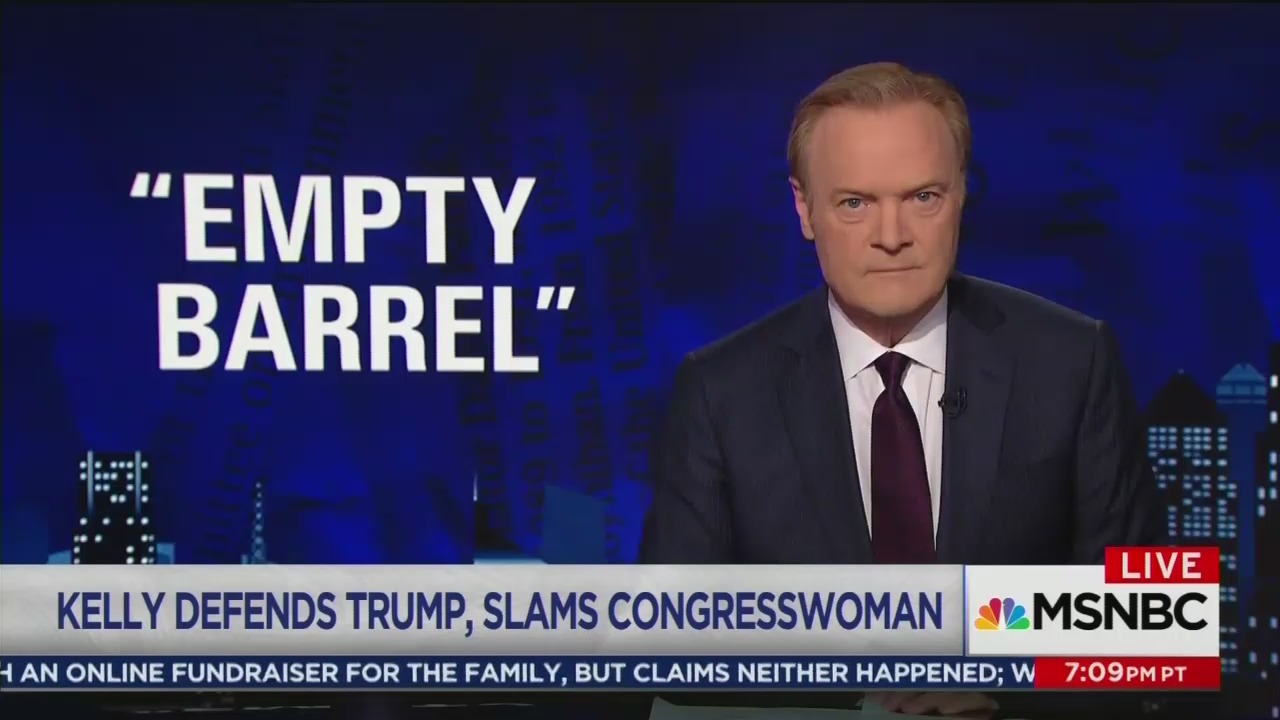 In an exhausting monologue Thursday evening, MSNBC host Lawrence O’Donnell spent over twenty minutes opening his show ranting and raving about White House Chief of Staff John Kelly’s press briefing earlier that day. O’Donnell was particularly offended by Kelly’s criticism of Democratic Congresswoman Frederica Wilson, who caused a media firestorm Tuesday when she accused President Trump of dishonoring a fallen soldier during a private phone call to their family. O’Donnell presented Wilson as a saint, and characterized the retired USMC General as a racist who “dehumanized” a “black woman” because he hates people who are not “like him.”

It would take far too long to highlight every ridiculous part of O’Donnell’s rant but here are some of the most outrageous ‘highlights’:

....Saying Kelly has no “empathy” for anyone who was “not like him,” and that Kelly “dehumanized” Frederica Wilson by asserting his “moral superiority” over her:

General Kelly did some of what he was supposed to do today. He did demonstrate empathy. But not for anyone who was not like him. His empathy was isolated to military families only. And in particular, to gold star families, to families who have lost a soldier in combat like the Kelly family. He showed no empathy at all for her. He talked about her a lot. He talked about her more than he talked about the president or his sons. And he never mentioned her name. He called her an empty barrel. He dehumanized her. In fact, from start to finish, John Kelly's comments in the briefing room today were essentially a lecture about his moral superiority over her and Donald Trump’s moral superiority over her.

...Insinuating Kelly was a racist, suggesting Kelly was behaving like he was still living in the segregated neighborhood he grew up in:

But he took time, a lot of extra time, to call a black woman who he doesn't know and he doesn't like an empty barrel.

...That ‘empty a barrel’. And I was stunned that John Kelly would so callously echo the worst part of the culture that he and I grew up in. Stunned. John Kelly and I have gone our separate ways in the world from our very similar beginnings in Boston Irish neighborhoods, so we are stunned by different things.

John Kelly's neighborhood in the Catholic parish he grew up and the Catholic parish that I grew up in, women were getting beaten by their husbands, their drunken husbands as a normal weekly occurrence. And their parish priest would tell those women, you can't get divorced or you'll be ex-communicated. You are just going to have to bear it and bear it for the children. It's nothing you can do about it. Women were not honored. Most women then were domestic servants and the women who had jobs outside of the home were not allowed to have most of the jobs in America at that time.

So today when John Kelly looked back on a world that never was, where women were sacred, he was standing in the White House occupied by the president who has not only dishonored women, he is the only president in history who has confessed to sexual assault.

...Attacking Kelly as “barely coherent” when he called Trump “brave” for making the tough phone calls to fallen soldiers’ families:

But when he attacked a Democratic Congresswoman and defended a Republican president, he was purely partisan and he was not telling the truth. There are many words that you can use for Donald Trump. The word brave has absolutely no application in the same sentence with the word Trump. And it dishonors any other use of the word brave that you might like to make if you use that word to describe Donald Trump. It was especially stunning coming from a military man who knows what brave is. Coming from a military man who has lived that bravery himself. Has risked his own life.

Kelly grew up in segregated Boston, in an Irish Catholic neighborhood where women were bullied, not honored, and blacks scorned & rejected.