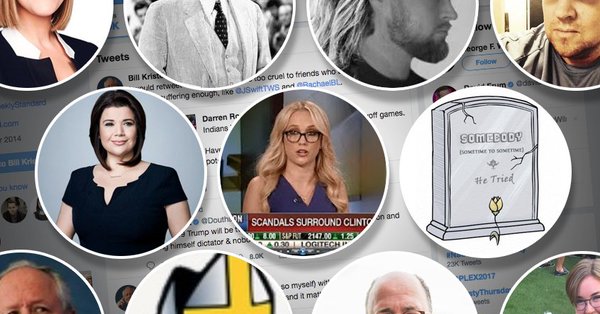 Over the weekend, liberal online magazine Salon put out a highly mockable list of their top “25 Conservatives Actually Worth Following on Twitter.” The story made a splash on social media, because it seemed Salon’s only criteria for being a “worthy conservative” is that you had to be an outspoken “Never-Trumper” and a fierce critic of the right. Brownie points if you support Obamacare and spew profanities at the president.

What didn’t count? Actually being a smart, thoughtful commentator on conservative ideas and a warrior against the liberal media.

Salon’s list is so out-of-touch from what a conservative is, that they even include virulently anti-conservative commentators like CNN’s Ana Navarro and the Washington Post’s Jennifer Rubin.
Taylor Link, assistant editor for Salon, introduced his article touting it would help liberals “get out of their bubble” if they followed these 25 “conservatives.” To make things more palatable, Link notes, these conservatives “not only dislike President Trump” but also were “ideologically introspective” (which seems to be a euphemism for, “they attack their own side.”)
Link began his list by recommending several anonymous Twitter accounts that used pseudonyms, as examples of conservative warriors. Keyboard conservatives who are so courageous they can’t even use their real names, apparently. Of one user called “Brandt/ @UrbanAchievr,” Link glowingly notes, he frequently goes after his “fellow” conservatives:

Beyond his condemnations of The Federalist, Brandt takes shots at his fellow conservatives, especially those who do not apply their beliefs uniformly.

Of another user called “Atticus Goldfinch/ @AtticusGF,” Link notes, he “goes after the real virus pervading right-wing politics....conservative media,” before embedding a series of tweets loaded with profanity-filled rants against Ben Shapiro’s The Daily Wire.

Next, it was time to move on to the “conservatives” in the mainstream media, ie: Never-Trumpers whose main role is to bash the right.

First up was CNN commentator Ana Navarro, who Salon’s Link notes, “isn't afraid to attack those who don't practice what they preach.” Nearly every week, Navarro appears on television as a foil to CNN’s actual conservative guest, to engage in an unhinged shouting match. Navarro is known more for her nasty anti-conservative rants and immature name-calling than she is for promoting any sort of conservatism.

Salon also included frequent MSNBC contributor Richard Painter, who has attacked Christian conservatives as racists, and The Washington Post’s Jennifer Rubin. Of Rubin, Link writes, she’s a “noted conservative blogger” who gives a “nuanced look” at the issues of the day. Which is laughable, because everything she writes sounds like it could've been written by any liberal in the media today.

Some other highlights from the list includes McCain and Kasich strategist John Weaver, who Salon touts as “the only Republican who fought for and defended the Affordable Care Act” and whose obvious “disgust for the president” made him a “must follow for liberals.”

And that was just a handful of the fake conservatives who made the list.

Of course this didn’t go over so well with actual conservatives. Columnist Kurt Schlichter rightly noted that the left-wing media doesn’t seem to understand what a conservative is, and to make this list, they either view you as non-threatening, or at worst, as a covert liberal. Writing at Townhall, he noted:

Getting named to Salon’s list of The 25 Conservatives Actually Worth Following On Twitter is either a grievous insult or a certification that you suck. Salon is saying that you’re not a carrier of a hardcore conservative contagion, and that the liberal establishment doesn’t need to worry. At best, Salon thinks you’re no threat. At worst, it considers you a fellow traveler. And some of these selectees really are straight-up Fredocons.

You know what you won’t find in the major papers or on the mainstream networks, besides timely exposés of Democrat megadonors who are also megaperverts? Conservative columnists who don’t foam at the mouth over Donald Trump and who actually support conservative policies. Instead, you’ll find a bunch of journalistic Jeb!s, because the liberals hiring them know that squishes gonna squish.

Look, far be it from me to tell my enemy when it’s making a mistake, but because the media only hires nominal conservatives who already agree with liberals, liberals have no idea what real conservatives think or why.