MSNBC Gushes Over McCain’s ‘Courageous’ ‘Moment' Standing Up to Trump 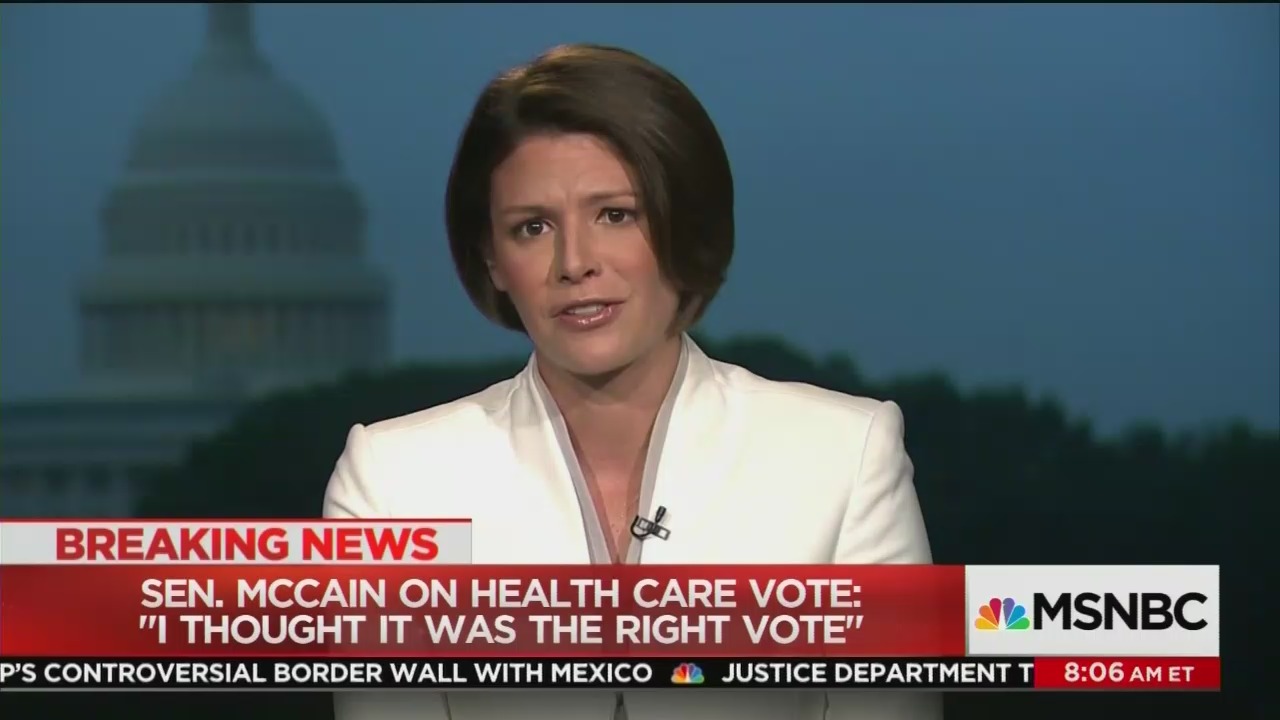 After the all-night battle over the GOP’s repeal ObamaCare bill, that ended in failure early Friday morning, MSNBC couldn’t stop gushing over the “maverick” Republican whose casting vote against the bill was the lynchpin that sealed the deal. Senator John McCain was one of the three Republicans who voted against their own party’s bill, and the liberal news network couldn’t stop praising him for defecting from the Republicans plan to repeal ObamaCare.

Reporter Kasie Hunt gave the play-by-play to anchor Mika Brzezinski on Morning Joe early Friday morning about what led up to McCain voting against the bill. While she admitted McCain had nothing to lose electorally with his vote, she still called the move a “courageous stance.” (This comes after anchor Brian Williams lauded McCain as a “profile in courage,” a few hours prior.)

KASIE HUNT: Ultimately Mccain told reporters he did it because he thought it was the right thing to do. And he had been talking with Chuck Schumer as well throughout the night. We are reporting, and it was really the surprised lynchpin. He came back to a few days ago after the president said, well, he's a crusty voice in Washington, but we need his vote. McCain gave him that vote to start this debate. Then he took a lot of heat for it. People called him hypocritical. They said, you talk a big game. You gave that very emotional floor speech but you are not willing to follow through. Last night he followed through. There was a very strange scenario, I've never really covered anything like it on capitol hill where Republicans came out last night and they said we're going to vote to pass this just as long as you promise us it never actually becomes a law. Which is a very strange thing for them to be advocating and, you know, McCain ultimately decided to stand up and follow through on it. Look, this is somebody who doesn't have much to lose on an electoral perspective. He's obviously battling a very difficult disease and he has prided himself over a very long career on being somebody who takes courageous stance.

Brzezinski agreed with Hunt, calling the vote a “McCain moment.” MSNBC senior political analyst Mark Halperin then gushed the Republican Senator wasn’t afraid to stand up to Trump for what is “right:”

MIKA: It certainly was a McCain moment. Mark Halperin, talk about that moment and what it meant, what it means for the future of healthcare.