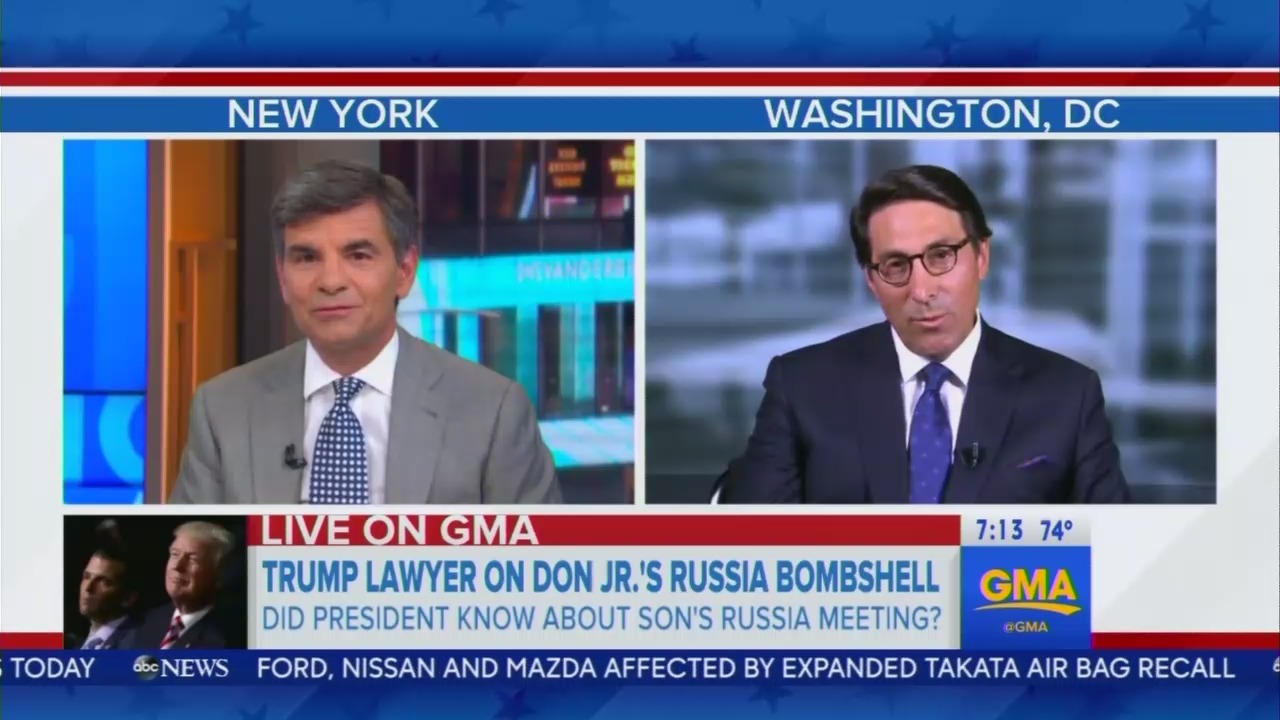 One of President Trump’s lawyers, Jay Sekulow of the American Center for Law and Justice, made his rounds on the morning shows Wednesday to defend Trump from the media’s accusations that he must have known about his son’s meeting with a Russian lawyer in June of 2016. On ABC’s Good Morning America, anchor George Stephanopoulos repeatedly tried to get Sekulow to admit Trump was complicit and would have to admit to that under oath, using media reports from anonymous sources as his basis of inquiry.

The interview started off with Stephanopoulos badgering Sekulow with questions about Trump’s opinion on his son’s meeting. Sekulow argued that Trump didn’t know about the meeting and even so, the meeting was not illegal. He then brought up Hillary Clinton and the DNC seeking out incriminating information from the Ukrainian government about Trump during the campaign. Stephanopoulos stopped Sekulow shortly after this to save face, by dredging up a seventeen year old example of where Democrats acted nobly in a similar instance.

In fact, other campaign operatives have been meetings like this and they’ve done very, very different things. When Al Gore's campaign in 2000 got a stolen briefing book from George Bush, they called the FBI. I can't believe anyone I've worked with in campaigns if they got an e-mail saying the crown prosecutor of Russia has information, official documents and information that would incriminate Hillary and her dealings with Russia that would be useful to your father and part of the Russian government support, an adversary of the United States. He gets that e-mail and says, I love it. The President believes that that's appropriate?

“No, I didn't say that. The President was not aware of this, George, until very recently by his lawyers and did not see the e-mail when we all saw it yesterday. So to put this in the President's lap I think is really inappropriate,” Sekulow began.

“[S]o the President signed off on that statement. Does he feel he was misled by his son and by Jared Kushner if, indeed, they didn't tell him about these e-mails that they both received?”

Sekulow denied the report, repeating again that Trump didn’t know about the e-mails.

STEPHANOPOULOS: Well The New York Times says he was involved. And that several people on the plane were involved as well. You're disputing --

Stephanopoulos tried a different approach, playing a video clip of Trump speaking at a rally to supporters the day after his son’s meeting. In the video clip, Trump mentions having information on the Clintons. “That’s raised a lot of eyebrows,” Stephanopoulos stated, before laughably turning himself into a lawyer:

I'm not worried about the president testifying on anything here because the fact is the President wasn't involved. So -- there's another aspect of this, George, and that is, if you look at the situation as presented in the e-mails, there is no illegality. Most of the lawyers that have come on the networks have acknowledged this isn't illegal. There’s no illegality involved here. So to put this statement about the president coming under oath on what? I mean, that would be the question here

STEPHANOPOULOS: We know it's being investigated by the special counsel and I was asking whether you thought whether the president thought it was appropriate, not whether it was legal or illegal.

Stephanopoulos refused to concede that point, saying warily, “I’m not sure you’re right about that,” before trying to end the interview.

STEPHANOPOULOS: I'm not sure you're right about that but we're going to have to leave it for now.

SEKULOW: I would know a little about it. I'm one of the lawyers.

STEPHANOPOULOS: We will find out. Jay Sekulow, thanks very much. Robin.