Dowd: Trump Tweets Distract Like Stranger Skinny-Dipping in Your Backyard 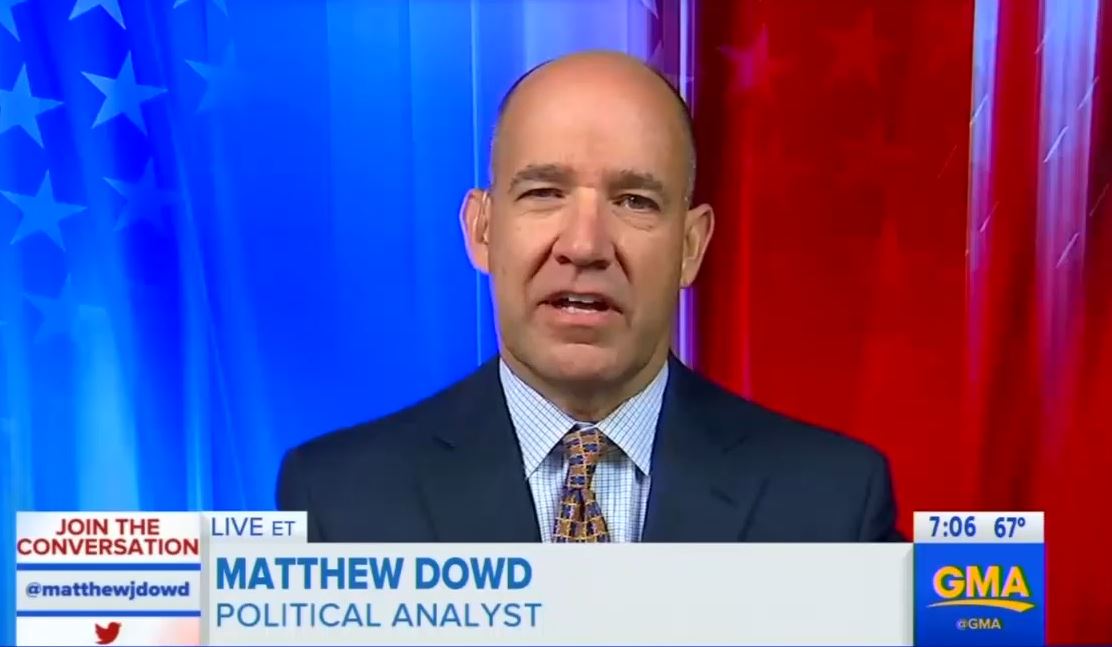 Matthew Dowd, ABC News’ Chief Political Analyst, never runs out of wacky analogies to hit Trump or the Republicans over the head with. On Monday’s Good Morning America, Dowd slammed Trump’s tweets against the media, saying they were as “distracting” as seeing a stranger skinnydipping in the river in your backyard. The comment came during a discussion with Cokie Roberts about Trump’s retweet over the weekend, which journalists have hyped as a violent threat.

Surprisingly, fill-in anchor Dan Harris began the discussion by asking if journalists were making too big a deal of the tweet, (a question that would be unheard of coming from Chief Anchor George Stephanopoulos.) Cokie Roberts denied the tweets were trivial calling them “appalling” in a time where somebody “goes to a ball field and shoots people” because of their political party. She fretted this tweet could provoke someone to do the same thing to journalists.

COKIE ROBERTS: You know, I'd prefer not to talk about the president's tweets at all. I think that he's trying to distract us with sort of bright, shiny objects from his failed programs. But the fact is that this one we really do have to talk about. It is appalling. First of all, I didn't know about the original WWE thing, which is pretty appalling in itself. But, you know, we are in a time when somebody goes to a ball field and shoots people just because they're Republicans. Not an individual as assassins normally did but just because they're Republicans. We could easily be at a time where somebody decides to shoot people just because they're journalists and that's really scary.

Though Roberts referenced June's Scalise shooting, she oddly didn’t point out that the shooter was a huge Bernie Sanders supporter, so it was not the right inciting violence. Harris moved on to ask Dowd if this tweet just bolstered his base. Dowd argued that Trump’s tweets were “beneath the office” and polls showed they actually were hurting his favorability with his base:

HARRIS: Matt, aren't we watching a familiar ritual play out here? The president does or says something provocative and the establishment or media voices voice their outrage and meanwhile, the president's base either shrugs it off or cheers him on. Is this any different to your mind?

DOWD: Well, you're right. The president continues to do things that are very provocative and beneath the office. I mean I think it has had a dramatic effect since inauguration day. If you think about the president, he got 46% of the vote. Today his job approval rating is 37% which means there's been a deterioration of people that support him but more importantly, for the president politically, more -- almost 50% of the country now strongly disapproves of this president and much of that rise has been his own self-inflicted wounds over the course of his presidency.

But Cokie Roberts interrupted to point out that the media is also highly disapproved of by the public.

"Now of course, a huge part of the country also disapproves of the media and he has been very successful in ginning that up," she added.

Dowd then pointed out that these attacks on the press were distracting from the battles Trump should be waging on leaders like Russia’s Vladimir Putin. He complained Trump had “impulse control problems” and his tweets were about as distracting as seeing somebody “swim naked in the river in my backyard”:

DOWD: I don't remember the president putting out a WWE video related to Vladimir Putin or attacking Vladimir Putin in the course of this. He's attacked the press and it's unbelievable among the course of the Fourth of July more than he’s attacked Vladimir Putin or Russia in this. ... I think -- I think this is a distraction but just like if somebody swims naked in the river in my backyard it's a distraction but it doesn't mean it's a strategy. Yes, he's distracting this and yes there's big issues to face but this is a guy that has impulse control problems and is not somebody that is strategic about this. He does these things then everybody else has to clean up the mess.