Editor’s Note: Some objectionable language below

How quickly do things change. Just 9 months ago, former FBI Director James Comey was the object of disdain by the left, for his investigation into Hillary Clinton’s e-mails. Now, apparently he’s the left’s sex symbol. In a piece that takes itself entirely too seriously, Daily Beast writer Lizzie Crocker tried to make the case that Comey was the “sex symbol America needs right now.” 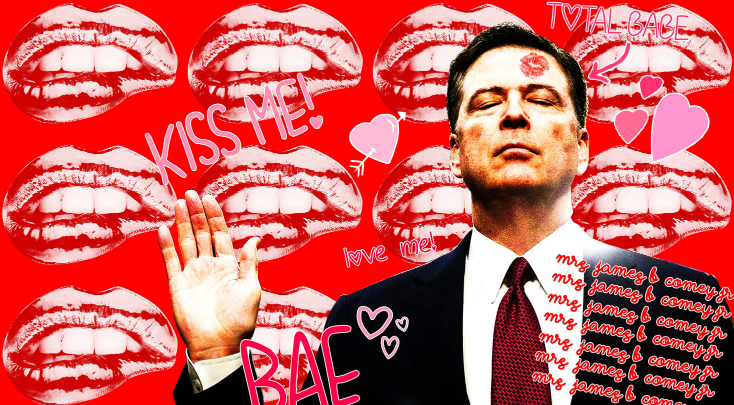 While watching Comey’s testimony last week before the Senate, “Many Americans confessed to unexpected feelings of lust,” she touted. “There was a collective stirring-of-loins across America: Comey was...hot?” she added, before getting more vulgar.

“By the end of his public testimony, James Comey was not just hot; he was eminently fuckable,” Crocker crooned.

If that wasn’t embarrassing enough, Crocker continued by touting all the ways that Comey made liberals have “all the feels,” (or as Chris Matthews would put it, gave him a “thrill up his leg:”

There was also something raw and appealing about his ability to be vulnerable without losing his composure…He was resolute, too, but not without a sense of humor... And it was hard not to be charmed by his admission that he wished he hadn’t broken a date with his wife to have a dinner date with Trump.

And so the 56-year-old, fired FBI director became a very unlikely sex symbol. Sure, he has a somewhat peaked complexion and under-eye bags that look like half-inflated tubular balloons. But he's handsome, and as with all sex symbols--both the unlikely ones and the obvious ones--he embodies certain qualities in society that we all lust after: integrity, emotional complexity, and quiet but certain confidence.

Crocker cites just two tweets as her evidence that Americans everywhere were distracted by Comey’s attractiveness during his testimony. She goes on to compare Comey to John F. Kennedy, Justin Trudeau and even Barack Obama, as an example of left-wing politicians who were “fetishized by fellow liberals.”

Power and status are often crucial qualities in the making of a male sex symbol, from Darcy to John F. Kennedy. Marilyn Monroe, herself a sex symbol, was presumably attracted to Kennedy’s good looks and charm as much as she was to his power as president--and a wildly popular one at that. Indeed, there’s a long tradition of left-wing politicians being sexually fetishized by fellow liberals-- and not just the conventionally attractive ones like Justin Trudeau….While Barack Obama was objectively handsome, the women and men who lusted after him did so because of his poise and perceived intrinsic morality, as well as how good he looked in a pair of swimming shorts or a suit. Michelle Obama understood it perfectly: asked how she felt about her husband’s sex-symbol status in 2013, she replied, “He’s a stylish man who is healthy and he’s smart and he’s passionate and he’s inspiring. And who wouldn’t fall in love with that, you know?”

Crocker dramatically concluded that Comey’s allure may be due to the “power” he held over the “future of our imperiled democracy:”

Seeing him in a position of power, with the future of our imperiled democracy depending in part on his testimony, was enough for many of those watching his testimony to crown him a sex symbol.