The media is obsessed with Trump’s tweets, even moreso this week after a simple typo Trump made in the middle of the night, and was deleted shortly afterwards, sent reporters into a tailspin of faux confusion and concern. CNN New Day hosts Chris Cuomo and Alisyn Camerota, along with analysts John Avlon and April Ryan, spent several minutes Thursday morning wondering what the obvious typo meant, and harping on the misspelling as some sort of sign that the White House was out of control. 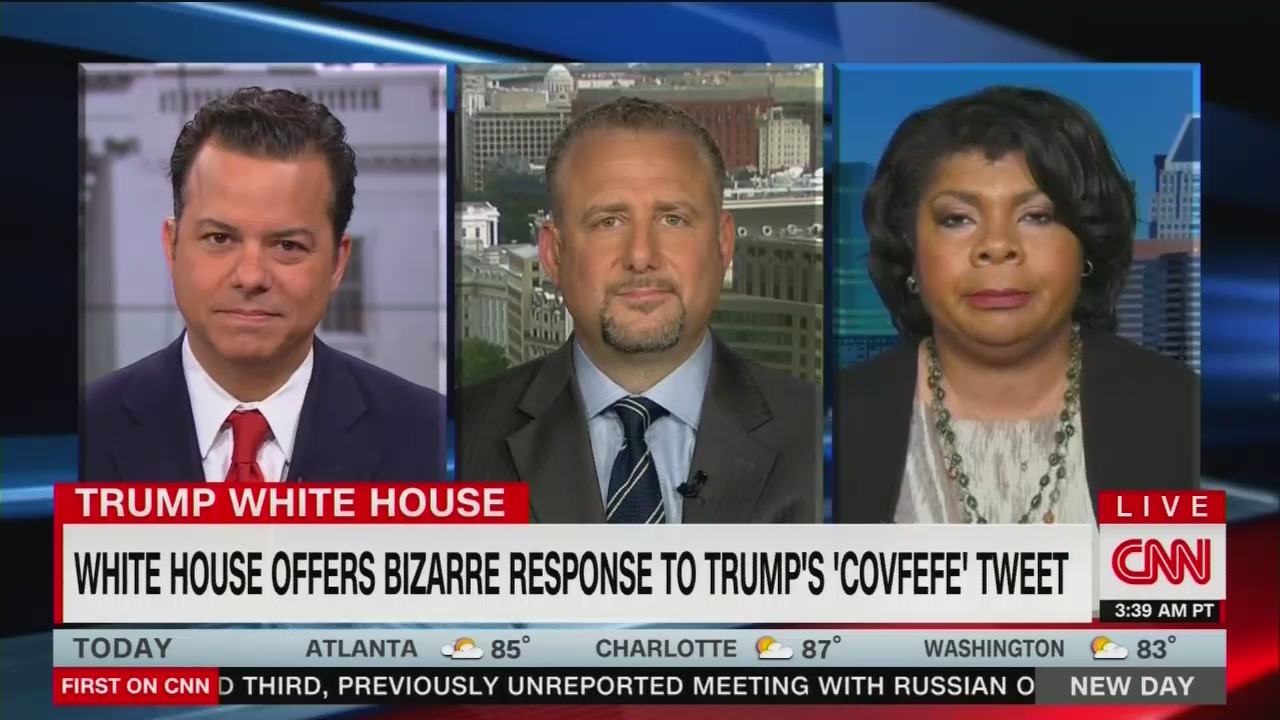 CNN first played the audio clip from yesterday’s briefing where reporters pounced after Sean Spicer explained the typo as something that “the president and a small group of people” knew “what he meant.” Despite all indications that this was nothing more than a misspelling and Spicer’s bumbling answer still being consistent with that explanation, the CNN panel set all that aside to psychoanalyze whatever the word ‘covfefe’ meant and what that tweet revealed about Trump.

First the panel spent time chuckling over Ryan’s voice overheard on the tape asking “What does it mean?” to Spicer during yesterday’s briefing. Cuomo and Camerota called Ryan the “collective conscience of America” and “all of us” in that moment, before getting her opinion today on Spicer’s answer.

CUOMO: We all thought it was a typo. Every indication it was typo. The president played with it as if it was a typo. Then Sean Spicer, I guess, intimates that it wasn't a typo? We hear you kind of call out in your puzzled -- what did you make of that?

APRIL RYAN: It was crazy. And I hate to use that word but it really was. I'm not going to assume as a reporter what the word was. I was assuming that it meant coverage but if he says there's a small group of people who understood what it was, so I’m like what is it? What is covfefe?

CUOMO: It doesn't exist. You can say it anyway you want. That's the beauty of it.

Ryan continued suggesting that Spicer’s answer meant that the typo had a hidden meaning, even going so far to wonder where the “checks and balances” on the president were:

RYAN:  It was real covfefe. Here's the deal. It was a ten minute or 11 minute off camera briefing that was backed into, right into a presidential event. It was timed perfectly. Sean came out. He looked like he was meat, raw meat in front of hungry hyenas. He looked very scared yesterday and when we got to that piece, everyone in unison in that room again the spin is out of control now. You wonder if it's spin or just we're going to throw it at them and don't care. It just doesn't make any sense. If you say only a small group of people know what that word means tell us what that word means. And then on top of that it makes you wonder about the checks and balances with the President and these archive tweets. He can delete it but it’s still in the Twittersphere. This President, he's the President of the United States. He did this. I mean we all have thumbs, we all have auto correct problems. But this was taken to another level and you just wonder about so many different things when you see something like this from the President of the United States of America.

Asked then about the audio-only briefing yesterday CNN analyst and Editor of the Daily Beast John Avlon slammed the White House as having the environment of a “junior high school” rather than the “leader of the free world.”

After Washington Examiner Senior Political Correspondent David Drucker wondered if the White House was just having fun with the media’s obsession over a typo, the liberal panel defended their behavior with some more virtue signaling.

CHRIS CUOMO: The reason we care about it is not because of this silly tweet, it's a window into the problem with random thoughtless tweeting when you're President of the United States. Because look at the Carter Page tweet right after it. He now completely changed the White House narrative on Page. Everybody comes out, everybody who takes a phone call or place as phone call from that White House all of us will attest we don't know Carter Page, he doesn't have anything to do with us, we don't know who he is. He was kind of a random. The president changes that narrative completely owning Carter Page, owning his story and making him as credible as Comey and Brennan.

JOHN AVLON: Look, it's a snapshot into the mind of the leader of the free world. It's news and has the effect of looking like Nixon tapes in real-time, unfortunately.

CNN continued the strange obsession with a typo even on their website. CNN’s Editor-at-Large Chris Cillizza spent an entire piece pretending he was a psychiatrist, analyzing the president as someone who listens to absolutely no one but himself.

What we have today -- and, really, what we have had since the day Trump came into the White House -- is a deeply isolated President who spends lots of time, particularly at night and in the early morning, watching TV and tweeting.

That lack of discipline reveals that there is simply no one who can tell Trump "no." Or at least no one whom he will listen to... The simple fact is that no staffer exists on the planet who can tell Trump something he doesn't want to hear and have him take it to heart.