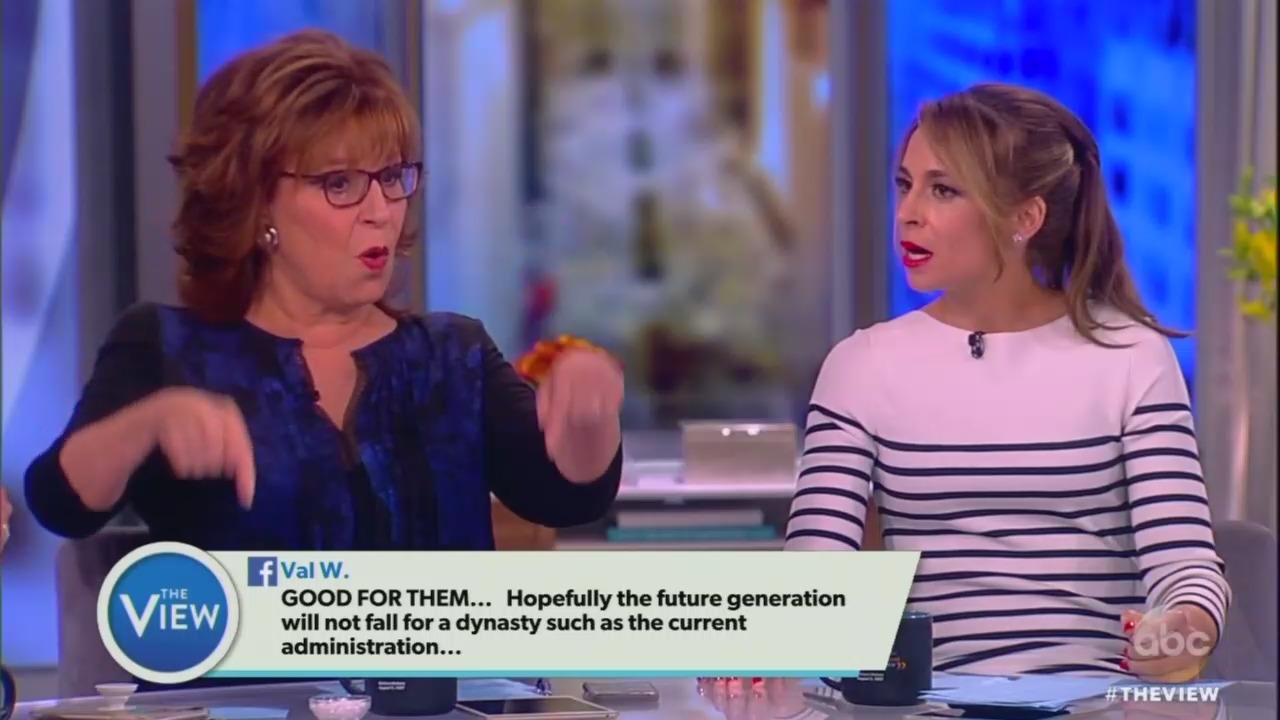 Overly sensitive students at college campuses everywhere have learned that if you protest a conservative speaker on your campus, you will be lauded by the media as “brave” and “patriotic.” That’s exactly what happened on Tuesday’s The View, when the panel finally got around to discussing Notre Dame’s graduation ceremony last weekend, where a large group of students walked out during Vice President Mike Pence’s commencement speech to his alma mater.

Instead of criticizing the students’ disrespectful behavior as an attempt to stifle free speech, the hosts, with the notable exception of Jedediah Bila, praised the students as “very American” and “taking a stand.” They actually argued that students shouldn’t have to listen to anything they disagreed with, with Whoopi comparing Pence’s appearance to a speech delivered by a member of the white supremacist KKK.

Whoopi led the discussion by characterizing the walkout as “civil disobedience.”

“Isn’t that what civil disobedience is supposed to be?” Whoopi asked. Co-host Jedediah Bila answered that though students had a right to protest, it wasn’t productive or helpful:

It bothers me. They have a right to do it but it bothers me because it seems like the younger generations have a hard time listening to stuff they disagree with and just listening. There's a lot of times I go into a room and someone is speaking, I don't like their policies, I don't necessarily like what they advocate for, I don’t necessarily agree with them. But I sit and listen and sometimes I leave that room more passionate about how I feel and saying wow, I really don't like that guy and sometimes I learn something and say there's another side or I hadn't thought about that. It's okay -- I think the message needs to be, it's okay to disagree. You don't always have to get up and walk out.

But the panel seemed to miss Bila’s entire point. Instead, her fellow liberal hosts argued, people shouldn’t have to stay and listen to anything they disagree with, and the students were right to walk out:

JOY BEHAR: Jed, they're not there to really listen or not listen. They're there to make a point. When they walk off, they're making a point. [Applause] The point is, I'm an LGBT person let's say. You do not represent me. You are hostile to my people.

SUNNY HOSTIN: And maybe you need to rethink your policy!

BEHAR: We're making a point now and a statement.

Hostin then praised the students as doing something that was “very American,” calling the protest a “bedrock of our society”:

HOSTIN: It's very American. It's the bedrock of our society, the ability to get up and walk out and make these points. I mean, I went to Notre Dame and it's a very conservative university, and in 2009 when Obama came conservatives were very upset and protested because of stem cell research. And so bottom line is this is something that's a tradition for Notre Dame and I want my Notre Dame fellow members and graduates and alum to stand up for what they believe in. That's what we should be doing. [ Applause ]

Afterwards, Bila argued students should be able to appreciate “diversity of thought” by not walking out. But Behar and Whoopi shot back that the students “knew” what Pence was “thinking already.”

Whoopi then outrageously compared Pence to the KKK, saying she shouldn’t have to sit through a KKK member’s speech, as a black woman:

BILA: But, but part of that should an appreciation for diversity of thought and the fact is --

BILA: They don't have to agree with him, and maybe their protest is --

Seemingly the only one with an ounce of common sense at the table, Bila pointed out the obvious, saying “This is different.”

“No, it's not!” Whoopi shot back, before they started talking over each other. Hostin tried to back up Whoopi by mistakenly calling Pence the former “governor of Louisiana,” before Bila called out Whoopi’s KKK comparison.

Feeling left out, Behar piped up to brag about her walkout during a Bill O’Reilly appearance on The View in 2010. Behar relied on the audience’s short term memories to recall the event, falsely accusing O’Reilly of saying something he didn’t say during that appearance:

BEHAR: When we walked off -- Whoopi and I walked off the set one day. Everybody who watches the show knows we walked off the set when Bill O'Reilly was talking against a certain group of people, against Muslims and saying that Muslims -- all Muslims were terrorists and they're responsible for 9/11 and to sit there with him and argue the point seemed futile to me.

BEHAR: My position was I'm not going to sit here and listen to this. Barbara Walters was upset with us. She said to both of us -- Whoopi and I both walked off. She said you should have sat there and argued with him. Then we were like, no, we didn't want to argue with that.

Bila ended her argument with the panel by saying that “unity” won’t happen if people won’t listen to each other. Of course, listening to the other side is not something hard core liberals like Whoopi, Behar and Hostin understand, so they rejected that notion, again. Instead, Whoopi repeated Hostin’s point earlier, that Pence should’ve changed his viewpoints to accommodate the students’ politics:

BILA: All I'm saying is if we want to be a country that has unity, you have to be able to sit and listen --

BILA: But he doesn't believe that.

As if three against one wasn’t enough, afterwards, the panel brought on actress Debra Messing to have her weigh in on the topic. Messing, who infamously urged for “someone” to “take down Mother Pence” at this year’s GLAAD Awards, agreed with the liberals on the panel, obviously:

I think that Mr. Pence has made himself very clear about his positions, you know, saying that conversion therapy is the way to deal with homosexuality. I don't think that there's any reason to wait to hear his point of view because the point of view has been made so clear