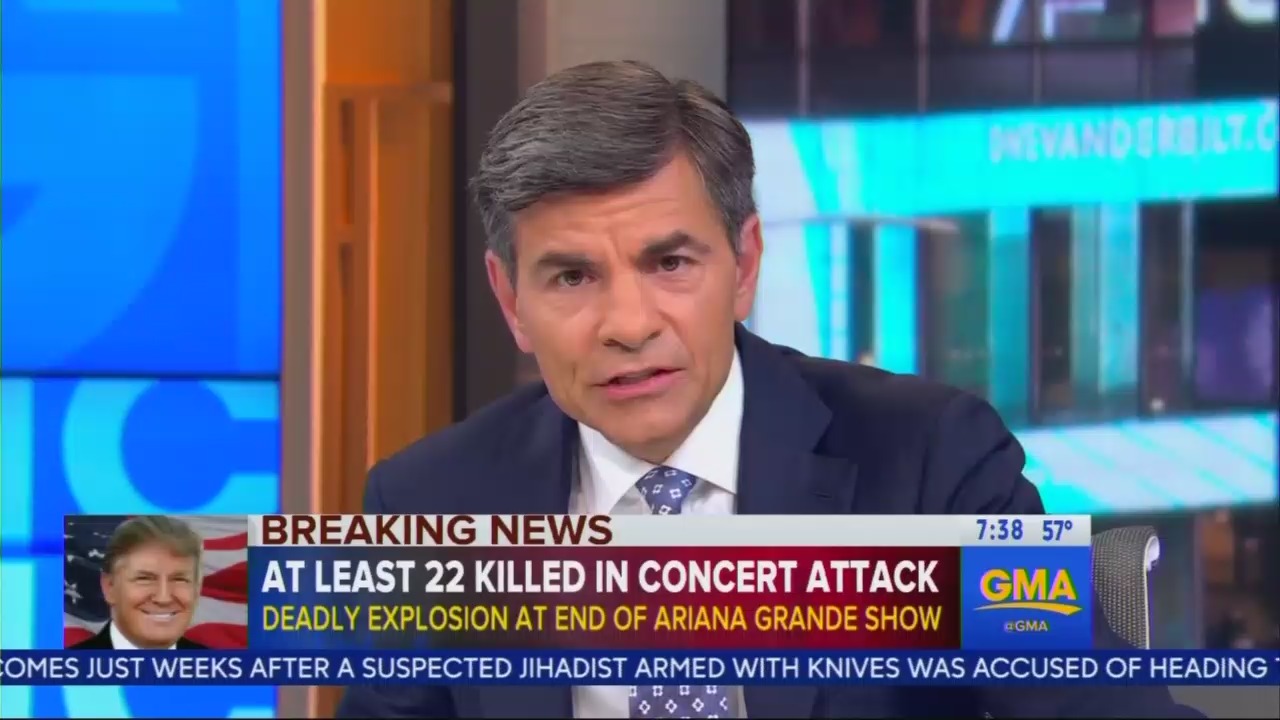 Twenty-two people are confirmed dead and dozens more injured, after a suicide bomber set off a bomb in a concert arena late Monday night in Manchester, England. Even more sickening is the fact that thousands of young children and teens were at this concert. Despite the horrific nature and impact, ABC was eager to downplay the motive behind the deadly attack. In fact, ABC was more worried about the perpetrators than the victims, warning that this could provoke an “anti-Islamic backlash” across Europe.

Good Morning America had multiple reports on the terror attack Tuesday morning but early on, ABC’s Chief White House Correspondent Jonathan Karl praised President Trump for leading in the way in not “rushing to judgement” to put the blame on Islam.

“The President’s choice of words was quite deliberate,” Karl noted. “It’s striking how different this was from the way we have seen Donald Trump respond to previous major terrorist attacks. There was no reference to radical Islamic terrorism, no talk of profiling,” Karl touted. He continued:

He did issue a call for unity for fighting terrorism and what he said, ‘The wicked ideology is forever obliterated.’ Very tough words Robin. But unlike what we’ve seen from him previously, there was no rush to judgement and no suggestion whatsoever that Islam was responsible.

Afterwards, anchor George Stephanopoulos spoke with correspondent Martha Raddatz and counterterrorism expert Matthew Olsen. After Olsen explained how this attack had the hallmarks of an ISIS attack, Stephanopoulos pushed back against the idea that radical Islam was responsible:

“But what you don’t have yet is a claim of responsibility,” he stated. To Raddatz Stephanopoulos then fretted that this attack would encourage “anti-Islamic sentiment” in Manchester. Raddatz agreed, saying it would “likely create backlash.”

STEPHANOPOULOS: And Martha, as you said, the people in Manchester are determined to kind of go back to daily life. This is also likely to inflame anti-Islamic sentiment across Britain, across Europe.

RADDATZ: It sure could George. Manchester itself is a very multicultural city. There’s a large Muslim population with many there for generations. So headscarf attracts little attention there. And notably, Manchester did not vote in favor of Brexit. But an attack like this, as you said, is much bigger than Manchester itself and will likely create backlash, depending on course, of the details of this attack.

CLARKE: They have a good police and security service and so do we, but we have no ostracized, we’ve embraced our Muslim Americans. That's why the talk against Muslims in the last year in the campaign and since has been very counterproductive. The only way to solve this problem is to have everyone think they're on the same side.