MSNBC’s O’Donnell Claims Trump Will Get Impeached for 'Ignorance' 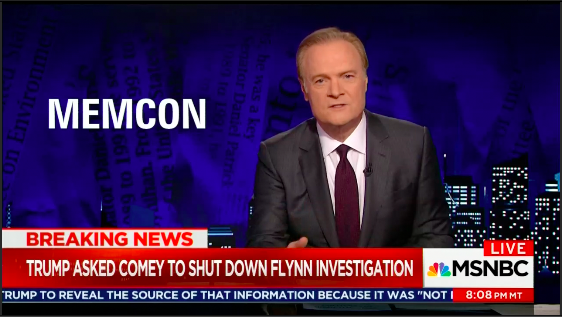 After wrongly and confidently predicting that Hillary Clinton had a 99% chance to beat Donald Trump in the presidential election, late-night MSNBC host Lawrence O’Donnell was back at it again with the brazen speculation, Tuesday night. To open his show, O’Donnell went on a lengthy takedown of the President, comparing him to Richard Nixon and his Watergate scandal, even claiming that Trump had done “exactly” the same thing Nixon was impeached for.

Before any evidence has even been displayed, he was ready for Congress to oust the sitting president.

O’Donnell centered his rant against Trump’s unfamiliarity with government and the law, blaming Trump’s own “ignorance” as the cause of his supposedly impending impeachment. He ominously called the Comey memo, “the greatest danger of his life.”

O’DONNELL: He's never heard of the practice of making a memo of a conversation. Lawyers do it all the time, prosecutors do, FBI agents do, and Donald Trump and many other people are just discovering today that Jim Comey does it. Source told to Jim Comey told me tonight when he was a federal prosecutor, he specifically -- Jim Comey specifically assisted all U.S. attorneys to write memos of any kind of material conversation, any conversation that was material to the case, with anyone, anything like that should be written up in memo form. If an FBI agent was present, then the prosecutor would not have to write that himself because the FBI agent would write what they call a 301, an FBI memo of the conversation. Everything I just said is common knowledge. Everyone knows it, that is to say, everyone working around prosecutions, around investigations, knows it, everyone working in government knows it.

John McCain said tonight, that the Trump scandals have reached a “Watergate size and scale.” Watergate got President Nixon impeached. On the verge of impeachment he resigned. He resigned as he faced impeachment in the house of representatives for exactly, exactly what James Comey's memo says Donald Trump did, obstruction of justice.

As NewsBusters’ Scott Whitlock wrote yesterday, even left-wing MSNBC might be tired of O’Donnell’s loony rants and conspiracy theories. O’Donnell is reportedly not in talks with the network for renewing his contract, which expires in just a few short weeks.