Newsweek writer Kurt Eichenwald has no problem using his platform as a member of the media to hurl death threats against those whom he disagrees with. After House Republicans passed the AHCA last Thursday, the liberal writer took to Twitter to air his grievances against the bill by wishing that their family members would be tortured and die. (Yes, really.)

Eichenwald, who made headlines last December for his tirade against internet trolling affecting his epilepsy, was celebrated by the media for his anti-Trump writing, despite his scandal-ridden past in journalism.

Staying out of the limelight isn’t his strong suit apparently, and he’s back complaining again about Trump and the GOP. This time, wishing death and torture on their families: 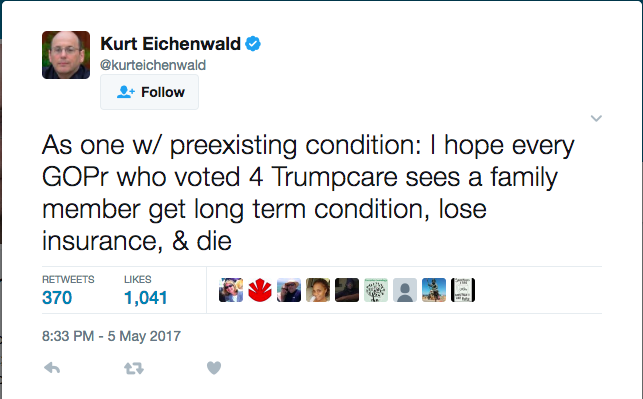 Eichenwald’s tweets have since been taken down, however, they are still available for viewing in archive form. 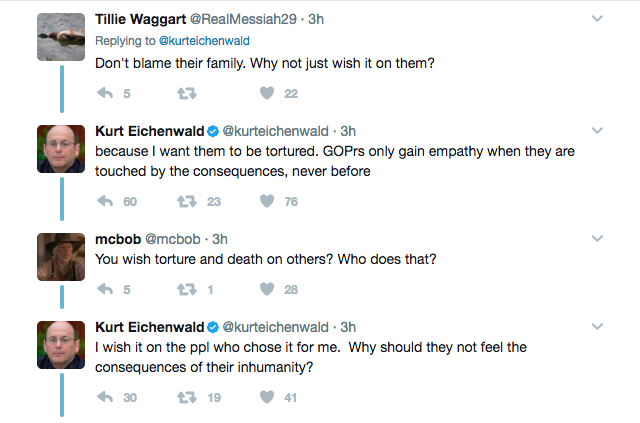 Despite deleting the tweets, Eichenwald doesn’t seem to be remorseful. Asked by the Daily Caller to comment, he responded with a lengthy defense saying basically that critics didn’t understand what was at stake

Asked @kurteichenwald for comment on his tweets wishing death upon Republicans' family members. He sent me this: pic.twitter.com/mrnHctG5zv

His tweet was also mentioned on ABC’s The View today, and defended by the liberal panelists who spun it as a call for “empathy.”