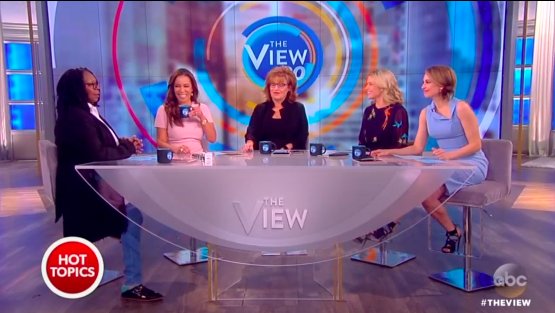 The hosts at The View couldn’t have been more thrilled with the news that Fox News ousted their longtime primetime personality Bill O’Reilly after multiple accusations of sexual abuse from female staffers and anchors. On the Thursday show, Whoopi excitedly told the audience that O’Reilly was “out” to loud applause, before boasting that the women at The View actually “broke with Bill” years ago, during a 2010 appearance on their show.

ABC then played a brief video clip of the 2010 appearance where the former FNC host discussed the Ground Zero mosque that was planned to be built there. O’Reilly took issue with the proposed mosque calling the action “inappropriate.” That set off the liberal panel, and Whoopi and Behar actually walked off the set in a really embarrassing display:

O’REILLY: The mosque, the mosque down here on 9/11. That's inappropriate. Sure, they have a right to do it, in the constitution. But it's inappropriate because a lot of the 9/11 families, who I know, say, look, we don't want that. It shouldn't be there.

After saying that, Joy Behar called O’Reilly a “pinhead” repeatedly and “un-American” for objecting to the mosque. Whoopi argued back and forth that most people didn’t have a problem with a mosque being built because Muslim families died in the terrorist attack too. After O’Reilly said again that it was “inappropriate” place to build a mosque there, Whoopi asked:

WHOOPI: Why is it inappropriate when 70 families died, what are you talking about?

O’REILLY: Because Muslims killed us on 9/11.

WHOOPI: Extremists did that! What religion was Mr. McVeigh? Mr. McVeigh was an extremist as well and he killed people --

BEHAR: I don't want to sit here. I don't. I'm outraged by that statement.

O’REILLY: You're outraged about Muslims killing us on 9/11?

WHOOPI: It took us five minutes, it took Fox 20 years….before Fox News did anything.

It’s always telling how liberals have to go back to 1995 every time they want to bring up an example of an allegedly “Christian” terrorist. What’s even more amazing is that Whoopi and Behar are bragging about this childish display seven years later, as if it were some sort of shining moment for their show. All it did was confirm how intolerant and averse to reality the liberal hosts are, and have always been on The View.