What a surprise, yet another news program using kids to advance their anti-Trump agenda. MSNBC senior political analyst Mark Halperin recently visited a Washington D.C. elementary school to get fifth graders’ opinions on President Trump, for his political roadshow on Showtime called The Circus. As you would expect, nearly every answer sounded like it came from a liberal activist, (albeit more polite.) 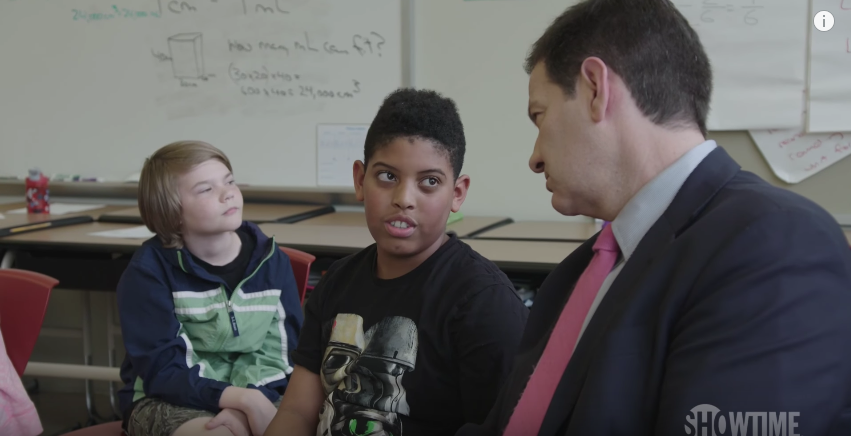 The classroom discussion began with Halperin asking the kids what they thought about the new president, in one word. Just about every answer was negative. The majority said things like Trump was “crazy,” “disrespectful,” and “troubling,” although there were two kids who had more positive answers, calling Trump “hard working” and “truthful.”

From there, Halperin asked the kids what Trump had done so far in office that they liked or didn’t like. One girl answered that she didn’t like “the wall” which prompted Halperin to ask the other kids to give reasons why they didn’t like the wall either.

One boy gave this atypical answer:

It seems like Halperin uses the same leading questions for kids as he does his liberal guests on MSNBC. Remember, not too long ago he literally invited his Democrat guest to list all the ways the “Muslim ban” made America “less safe.”

After that, Halperin asked for more opinions on what Trump has done in office. This prompted a bunch of concerns about Trump not believing in global warming and how his EPA cuts were “hurting” the environment.

Only one student raised their hand when Halperin asked if they approved of Trump. The kids gave responses like:

“I think he’s kind of careless”

“He’s only doing what he wants to do and he’s not trying to satisfy all the nation, he just sticks with ideas and doesn’t try to improve them.”

Halperin also asked the students where they got their news information. The girl who didn’t like the border wall gushed that she watched Morning Joe every day, while another girl said she watched the nightly news with her family.

The media using kids for their own purposes is nothing new. Not ironically, these same networks used kids during Obama’s presidency to promote the “hope” he gave them, and defend kids singing creepy odes to him.

MSNBC’s parent company NBC used kids to scold Trump again, just a month ago, in a video called “Letters to the President.”

Again, last July NBC did the same thing again in a video focused more on praising “historic” Hillary Clinton, as the first female nominee for president.

Looks like their propaganda didn’t work out too well for them, did it?