‘What Is He Trying to Hide?’ GMA Eagerly Looks for Scandal in Trump's Tax Returns 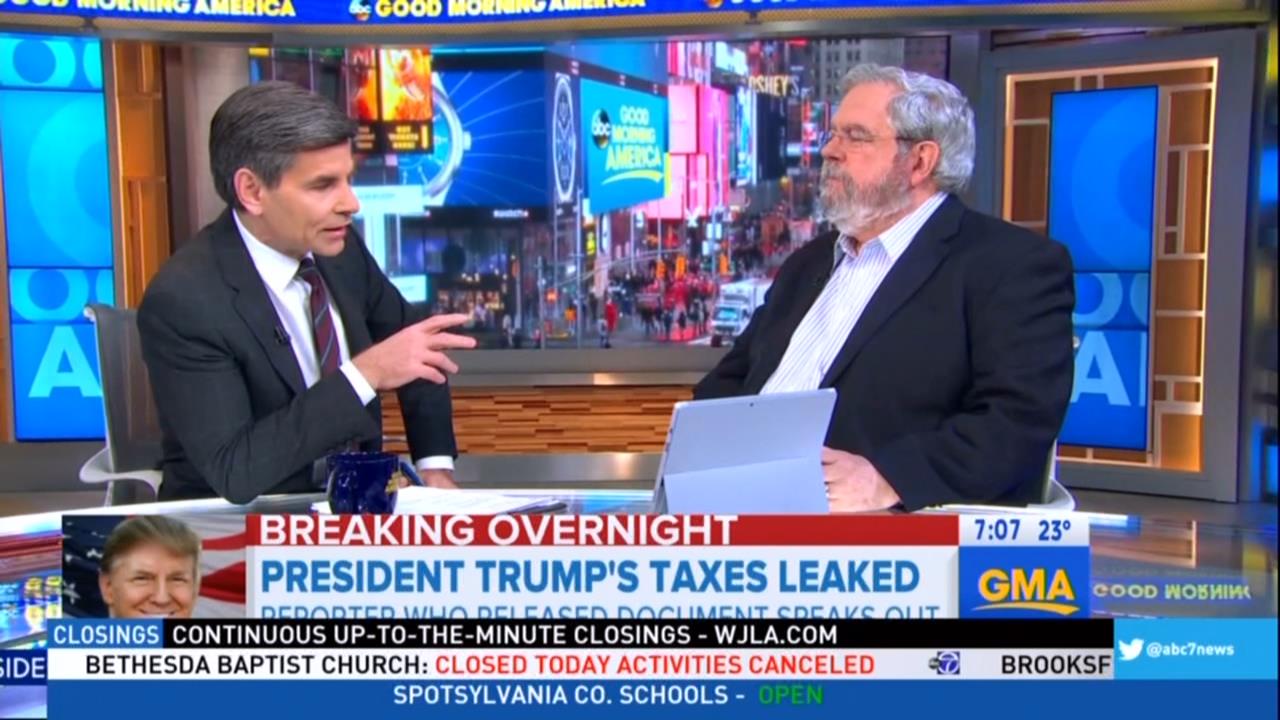 The morning after President Trump’s 2005 tax returns were leaked to the press, the media eagerly reported on the returns, speculating whether there was more to the story than the documents revealed. ABC’s George Stephanopoulos even interviewed the journalist who first reported the story Tuesday night on MSNBC, asking him what Trump could be “hiding” in the benign report.

Stephanopoulos began the interview with Daily Beast contributor David Cay Johnston “congratulating” the “Pulitzer prize winning reporter” for “breaking” the story on his website, DCReport.org last night, before appearing on the Rachel Maddow Show. Oddly, ABC acted as if this was the first time Trump’s 2005 tax returns had been made public, when actually the Wall Street Journal wrote on this tax return last March. On top of that, the White House actually released the 2005 tax return prior to Rachel Maddow’s show airing Tuesday night.

The two page document leaked didn’t reveal much other than the fact that Trump paid his fair share of taxes, a sore disappointment to the media who’s been clamoring for news that Trump cheated on his taxes for months now. Stephanopoulos revealed his disappointment at the news by trying to create controversy where there wasn’t any, asking questions like, “What is Trump trying to hide?” and “Will this spring more leaks?”

STEPHANOPOULOS: [Y]ou just got two pages from 2005. What doesn't this show?

STEPHANOPOULOS:  [T]hese 2005 returns certainly not scandalous in any way from what we know of what was released so what is it he trying to hide in your view? You've covered him for a long time.

To that last question, Johnston eagerly responded, “I hope so!”

Johnston’s political leanings were never mentioned by ABC, but Stephanopoulos was sure to mention at one point that Trump “didn’t like” Johnston. It would’ve been more prudent for Stephanopoulos to note how much Johnston “didn’t like” Trump. Johnston constantly tweets critically about the president and Republicans, and is apparently even writing a book on Trump.