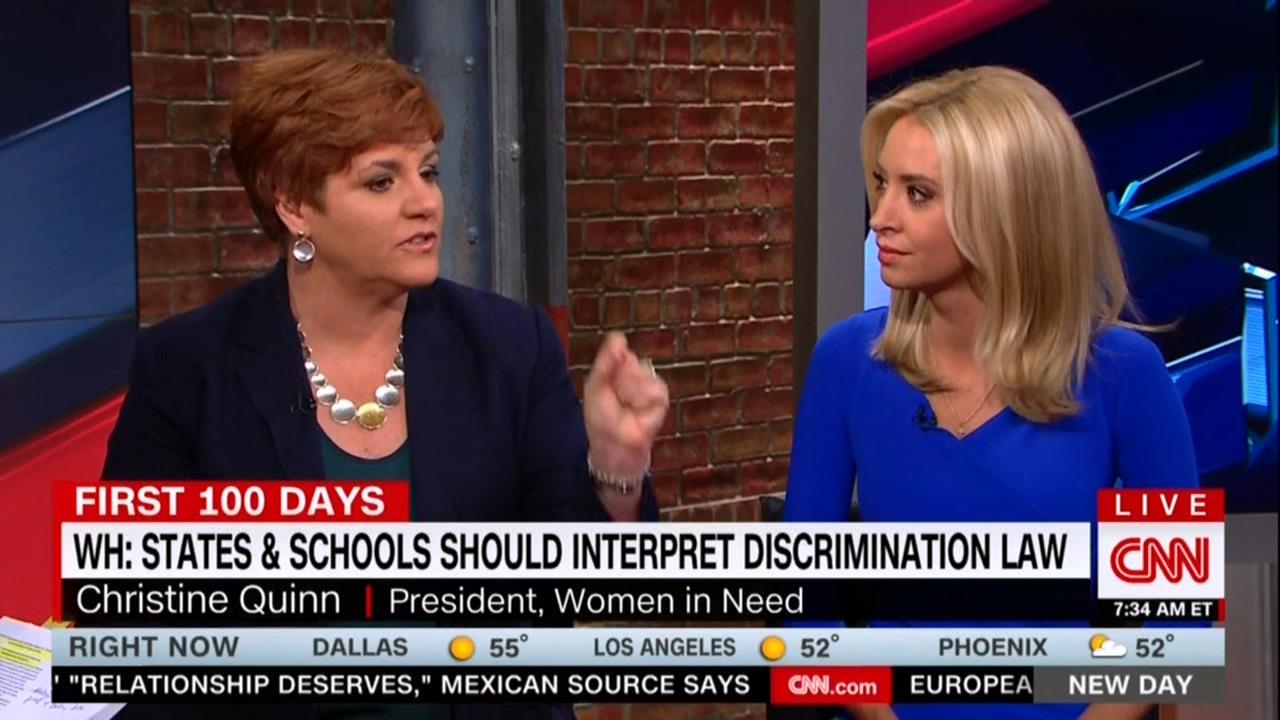 Camerota started the nearly 13-minute-long argument by asking liberal guest Christine Quinn what Trump’s “motivation and timing” was for reversing the law.

ALISYN CAMEROTA: What do you think about the Trump Administration's motivation and timing of taking away these federal protections for transgender students?

Quinn answered with an emotional rant, calling the reversal of a law that has literally been in place for less than a year, a “cruel” “attack.”

CHRISTINE QUINN: Why single out transgender students? Some of the most vulnerable Americans in the country, there is no other way to describe this than cruel. And attacking particularly children?

Camerota then asked McEnany what she thought Trump’s motivation was for doing this.

McEnany argued it was about states’ rights, and the rights of sexual assault victims. She also cited cases where men took advantage of this law, by posing as women to enter women’s bathrooms to sexually assault women but Camerota interrupted.

MCENANY: No, it’s entirely tied in.

An angry Quinn claimed that she was trying to “fall back on” sexual assault cases to promote “discrimination.”

QUINN: Wait, wait, wait. People who are rapists and sexual predators take care of any loophole at any moment they can. They will tragically attack children on the street. Come up behind women on the street. This isn’t about sexual predators.  It is about equality for transgender students and states rights is always what people who are attempting to discriminate fall back on and we're not --

MCENANY: Christine, you just made the case---

QUINN: No I did not.

MCENANY: You just made the case for exactly why this law needs to be looked at hesitantly. Because as you just said, sexual predators will take advantage of any law which is why we have to treat this with care.

Camerota again interjected to backup Quinn, saying this was just “one incident” and shouldn’t be used to “eclipse protections” for “teenagers.” McEnany responded that it was actually “multiple” cases but the liberal panel kept shouting her down.

MCENANY: It’s more than one incident. Look at the fact when Target put this policy into place. There were multiple cases of voyeurism--

MCENANY: You can find there's at least 21 instances of times people took advantage of the law and preyed on women.

QUINN: [talking over, shaking head] That’s not true. And that is not a fact.

Actually, there have been several documented cases of this sort of thing happening, but Camerota didn’t try to correct Quinn. Instead, she invited Ana Navarro to add to the misinformation being spread.

As is her style, Navarro began by attacking McEnany for saying something she didn’t actually say.

ANA NAVARRO: Look, frankly it hurts me to hear the words sexual predator used in the midst of this discussion. Transgender people are just like me and you okay? I’m a Republican--

QUINN: Yeah you did, you did!

Navarro added that it was “unfair to target” kids who “are already bullied” and are “so fragile” with “such words and such discussion.”

“We are talking about human beings!” she gushed.

McEnany responded by trying to defend herself for being taken “out of context, entirely.”

Navarro then accused McEnany of painting with “a broad brush” in tying “transgender youth” to “sexual predators.”

NAVARRO: You know, We talk about immigration, you find the most horrific case about a criminal and try to paint it with a broad brush stroke. We're talking about transgender youth and you find some horrific case involving a sexual predator.

Camerota jumped into agree again with her liberal guest, piling on McEnany for “introducing” sexaul assault into the discussion. Quinn followed up with the attack, accusing McEnany repeatedly of promoting “discrimination.”

CAMEROTA: They have been attacking people with or without transgender. I mean, sexual predators will find any excuse and it does feel like you're introducing that level of sexual deviance into this and really this is a question of whether or not these laws do protect transgender teenagers--

QUINN: I want, I want to jump in for a second cuz Kayleigh, you do this repeatedly as do other Trump supporters. You don't say -- you say something, imply something and say you're not saying it. We're talking about transgender children today. You're a lawyer. If you wanted to debate Title IX we can have that debate. But you, as Ana said, bring up sexual predators. So people will leave this segment and they’ll have heard two things, transgenders and you do it and the Trump supporters do it to create smoke screens to substantiate and validate discrimination and we need to call the Trump supporters on it. It's pivot, pivot, pivot. It’s discrimination.

McEnany ended by briefly reiterating her argument before Camerota moved onto another topic.