Kelly Calls Out Hypocritical Media for Whining About Trump's 'Blacklist' 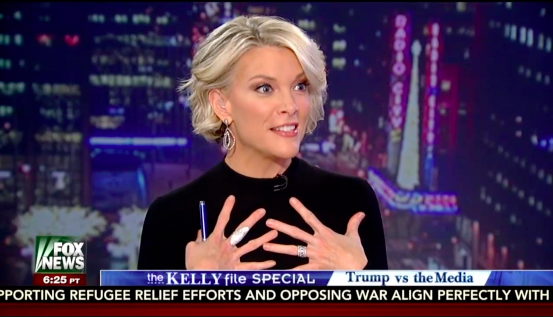 Monday night, FNC’s The Kelly File aired a program dedicated to Donald Trump’s relationship with the media. During the one hour special, host Megyn Kelly spoke with correspondent Howard Kurtz, New York Times columnist Jim Rutenberg, Baltimore Sun media critic David Zurawik and The Federalist’s Mollie Hemingway about how the media didn’t anticipate Trump’s election win. At one point during the show, Rutenberg brought up how the media were taken aback by Trump’s “blacklist” against certain media outlets. Kelly shot back that Trump wasn’t the only candidate to ignore media outlets they didn’t like.

JIM RUTENBERG, NEW YORK TIMES:  But one thing is that you had Mr. Trump who had a blacklist against reporters.

MEGYN KELLY: May I submit to you that Barack Obama had a blacklist about reporters who happened to work at this news channel as well.

Kelly followed up by detailing how Hillary Clinton ignored her numerous attempts to get her on the program, all the while using Kelly to attack Donald Trump.

KELLY: Take Hillary Clinton, all of her time out there saying what a fantastic journalist I am, which she was using because she knew Trump had attacked me. She was using to try to curry favor with certain voting blocks. I asked her 50 ways from Sunday to come on the program from anyone who could possibly ask her. She wouldn't do it. And the reason I think was she was scared.

The second reason Clinton wouldn’t go on Kelly’s program, she alleged, was because Clinton didn’t want to “legitimize” Fox News, in this era of “fake news.” Kelly called out the media’s double standard of pretending outrage over Trump’s media blacklist while ignoring when Democrats have done the same thing.

KELLY: But also her team didn't want to "legitimize" Fox News. And yet people who didn't call her out at all are shocked and horrified that Donald Trump might not sit with certain news reporters or organizations.

The Baltimore Sun’s Zurawik said, “I love that you called her out,” before adding:

“Can I say one thing about Trump and dealing with the press? It’s not going to be pretty.”

Zurawik noted that Trump had found a “sweet spot” in this era of transition between television and social media, bypassing the traditional press. “He doesn’t need the media,” Zurawik noted. “Until the media somehow convinces him ‘you need us,’ he’s not going to use it,” he stated.