CNN: Media Has ‘Always' Been 'Adversarial With the President’

Monday morning on CNN’s New Day, anchors Chris Cuomo, Alisyn Camerota, and analysts Brian Stelter and Bill Carter held a roundtable discussion about the relationship between the media and the President. While Stelter fretted about Trump’s impact on the state of journalism, Carter and Cuomo laughably claimed the media has “always” been combative with the President but Trump was more hostile than his predecessors. 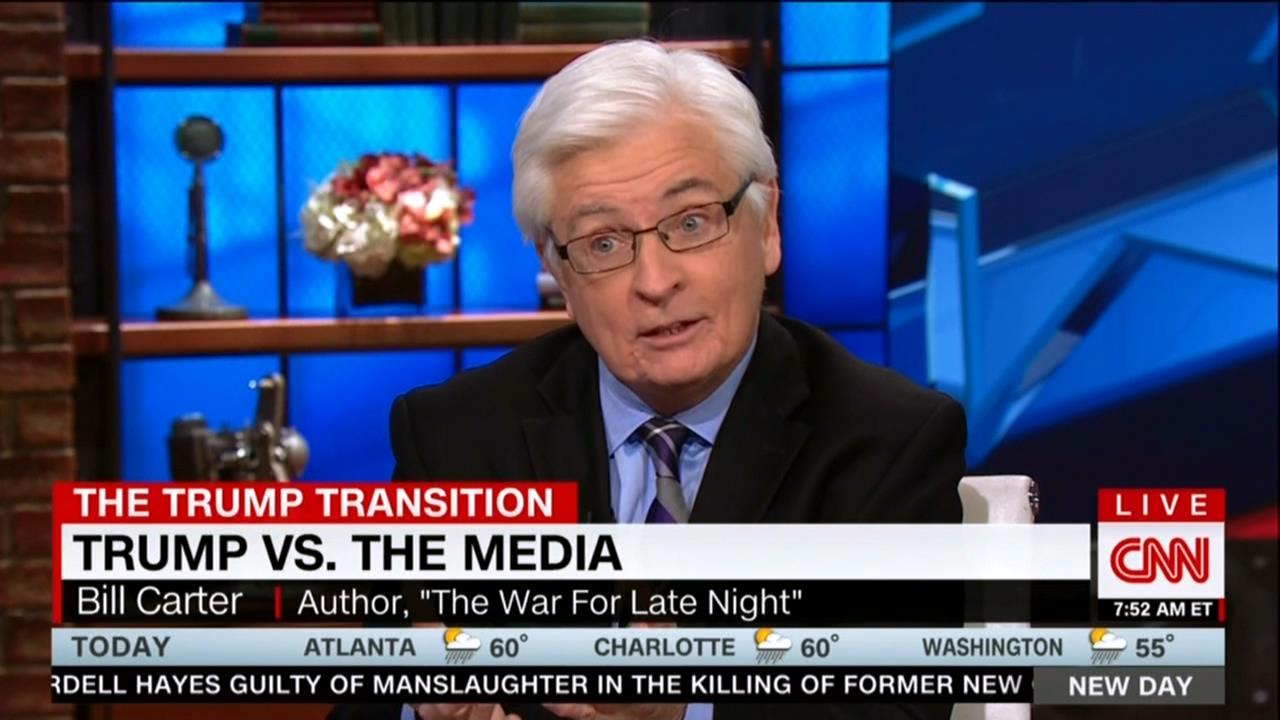 Host Chris Cuomo began the segment by dismissing Trump’s criticisms against the media as undeserved because the media has always treated presidents like this.

CHRIS CUOMO: Bill, the animosity between the politicians and the media is not new.

BILL CARTER: Not at all.

Which, of course, is very easily disproven. From the very beginning of President Obama’s transition into the White House, he was lauded by the media and gushed over; a behavior that continued throughout his two terms and presumably will continue into Trump’s.

Carter repeated again the false notion that the media has “always” been “adversarial with the President” before hyping how difficult  it would be for the media to report with a “hostile” President who’s “going to challenge everything they report.”

CARTER: I see it getting worse. I see it only ratcheting up. Because I think the media is now in a unique position of being the only power base not controlled by the Republicans.

And they have to -- they were always adversarial with the President. They are in a particularly difficult position now. They have to challenge this president and he's going to push back on every front. He's going to say they're not credible. He's going to challenge everything they report and there's a flood of fake news out there they have to kind of wade their way through. So it's an incredible challenge. I think the hostility is different from previous. Because it's adversarial, yes, but this is real hostility. Honest to God hostility.

Brian Stelter jumped in here to bash Trump for “delegitimizing journalism” among the public.

“[H]e and others like him scorch the ground, scorch the Earth where quality journalism can grow and can thrive,” Stelter added. “That's why so many journalists are on guard right now.”

STELTER:  I was at a journalism  conference over the weekend there was deep-seated concerns both about the practical steps that the Trump administration could take against the press but then about this philosophical issue of a deepening divide, a deepening credibility crisis.

A flabbergasted Alisyn Camerota responded, “How much responsibility do we need to take?”  She added:

CAMEROTA: How do we prove to people that we are trying to get the facts and get it right?”

Stelter frankly admitted that trust in the media had eroded over the years and it would be a gradual process to gain the public’s trust back. However, Camerota and Carter noted, it’s still the media’s job to “call out” fake news even if it means you’ll be perceived as partisan.

CARTER: But you can't be afraid. You can't back off. You can’t say well I'm nervous now and I'm going to be seen as partisan. You should be partisan about is the best interests of the United States --

CAMEROTA: Yeah you got to call it out. You still have to call it out when you see hypocrisy or you see the facts not adding up, you have to. That's our job.

Stelter melodramatically responded that the media “stand with truth,” adding, “But right now ‘truth’ is so confusing [because] we’ve got these alternate realities.”