On the View, Whoopi Claims No One in the Media Fact-Checked Trump 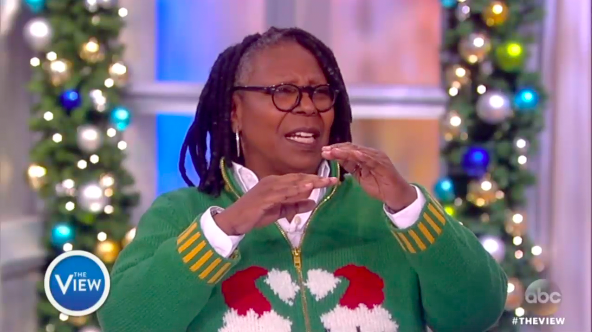 Tuesday on The View, the panel discussed “fake news” and how Trump has contributed to the proliferation of “fake news” and the consequential distrust in the media. Co-host Whoopi Goldberg then made the ludicrous claim that the media gave Donald Trump a free pass and never called him out for making false statements.“There was no one saying, ‘Hey, wait a minute. That’s not true, you can’t say that!’” Whoopi claimed.

WHOOPI: [O]ne of the issues that Donald Trump seems to have with the media, that by the way for 18 months really kind of pushed him down our throats, because he was all you saw for 18 months. I mean, he -- we elected the guy we saw every day. That's what people did. They saw that, they heard the lies. And nobody said, hey, that's not true. There was no one saying, hey, wait a minute, that's not true, you can't say that, we don't do that. So now he's decided he doesn't want to talk to the media because now the media is crooked again. So when he's doing well, maybe the media is crooked but if he's losing it's definitely crooked and if you disagree with him you're crooked, but the media put him where he is.

For Whoopi to claim no one in the media fact-checked Trump would only make sense if she was living in a bubble. The media took glee in calling out Trump at every chance they got, regardless if he was saying something accurate or not. CNN’s Brian Stelter even joked that Trump “made fact-checkers great again.” Supposedly nonpartisan Politifact gave Trump 59 “Pants on Fire” lying ratings to Clinton’s 7. Whoopi’s claim of an uncritical media is just not grounded in fact.

Later on, Joy Behar insinuated that journalists, like Candy Crowley, were punished for being hard on candidates.

JOY BEHAR: Remember what Chris Wallace said during the debate? He said it's not the job of the moderator to correct the -- what do you call it, the candidate. It's the job of each one of them. Candy Crowley corrected Romney in the last election and we have never seen her on television again. Remember that.

But Sunny Hostin responded by reiterating the need for a “vigilant” media: